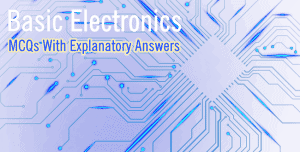 Q1. Choose the below option in terms of ascending order of band gap energy

Diamond has the highest bandgap energy, about 6eV. It is this high bandgap which separates the filled valance band from the conduction band and makes Diamond an insulator. Though Graphite is also a form of Carbon, like Diamond, its crystal symmetry is different and band gap energy is about 1eV, making it a conductor. Bandgap energy of Silicon is about 1.21eV, which can be acquired only with increase in temperature, making it a semiconductor.

Substituting T = 300 in both the above equations, we get Bandgap energies as given below;

Q3. Electrical characteristics of a semiconductor depends on concentration of free electrons and holes.

Current Density in any conducting material is given as:

Thus it can be seen that the electrical characteristics depends on concentration of electrons and holes. Thus, the above statement is true.

Q4. Transport of charge carriers in semiconductor is achieved through: –

Q5. The electron mobility of Germanium at room temperature (in Kelvins), for an electron diffusion constant of 99 is approximately: –

As per Einstein’s equation for diffusion,

Q6. Carrier lifetime for holes and electrons in a semiconductor ranges from –

Answer: 3. Nanoseconds to hundreds of microseconds

Q7. Which metal among these is widely used as a recombination agent by semiconductor manufacturers to obtain desired carrier lifetime of charge carriers?

Q8. The Hall effect is used to determine the

Hall effect is the phenomenon of induction of electric field in a semiconductor specimen carrying current of magnitude I, when placed in a transverse magnetic field, B. If current is in positive X direction, Magnetic field is in positive Z direction, force will be exerted in negative Y direction. The polarity of voltage, VH across the specimen determines whether it is N-type or P-type.

Also, carrier concentration is determined as:

w = width of the specimen in direction of magnetic field.

Q9: The thickness of space charge region for a P-N junction diode is of the order of :-

Q10. Formation of a junction between a sample of P-type and N-type material causes _______ action

Explanatory Answer: Addition of donor atoms into one side of an intrinsic semiconductor (like Germanium) and acceptor atoms into another side, causes formation of a junction. Under no external applied electric field, a potential barrier exists across the junction due to formation of depletion region (depletion of mobile charge carriers). However, when an external electric field is applied such that p-region is of positive polarity and n-region is of negative polarity, the potential barrier is reduced, causing flow of current. This is called Forward biasing.

When the opposite occurs, i.e. p-region is of negative polarity and n-region is of positive polarity, the potential barrier is increased, hindering the flow of current. Thus,  since the p-n junction device would allow flow of electricity in only one half of the electric signal, but not in the other half, this constitutes rectifying action.

Q 11. Cut-In or breakdown voltage of Silicon diode is greater than that of Germanium diode because ______.

Explanatory answer: For a Germanium diode, the breakdown voltage is about 0.2 V, whereas that of Silicon diode is 0.6 Volts. The reason being that, reverse saturation current in a Ge diode is about 1000 times more than that in Si diode. Also, current flowing through the diode is as given below;

For Ge, the symbol  η = 1, whereas that for Si is 2 for small currents and 1 for large currents. Hence, for first several tenths of volts, the current varies as e V/2VT.

Q 12. For intrinsic Germanium, the change in conductivity per degree rise in temperature is: –

Explanatory answer: Intrinsic concentration for any semiconductor is as given below;

Conductivity of intrinsic Germanium varies with concentration as given below;

Substituting the constant values for intrinsic Germanium and merging both the above equations, we get that conductivity increases by approximately 6% per degree rise in temperature.

An Overview of Energy Conservation in Buildings