Traffic Lights are used to control the vehicular traffic. In the modern era, everyone has different types of vehicles resulting in rise to the numbers of vehicles. That’s why traffic lights are mandatory to avoid the traffic jams and accidents. There are three lights in the traffic signal, having different message for the drivers. Red light (upper one) asks the driver to yield at the intersection, green light (last one) gives the driver free license to drive through the intersection whereas the yellow light (middle one) alerts the driver to wait if the next light is red one or get ready to go / turn the engine ON if the green light is next.
Traffic light has proved to be an amazing way to stop the vehicular collisions and control the traffic jams in today’s modern era where everyone owns the different types of vehicles. 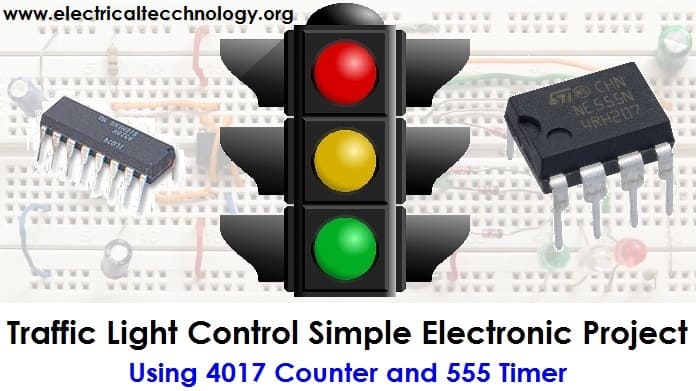 As we all know, the name of the project is “Traffic Light Control”. The fundamental idea of this simple electronic project is to control the traffic. It can be used to avoid the vehicular collisions and traffic jams. This project is just a one-way traffic controller, although it can be further modified as well. Project will work in a way, it provides the instruction to the driver whether to drive through the intersection or yield at the intersection.

There are three control lights or signals, which will provide the instruction to the driver.

There are quite a few components, which we will be using to make our Traffic Light Control System. Following is the list of the components.

This traffic light is made with the help of counter IC, which is mainly used for Sequential Circuits. We can also call it as Sequential Traffic Lights. Sequential Circuits are used to count the numbers in the series.
Coming to the working principle of Traffic Lights, the main IC is 4017 counter IC which is used to glow the Red, yellow and green LED respectively. 555 timer acts as a pulse generator providing an input to the 4017 counter IC. Timing of glow of certain lights totally depends upon the 555 timer’s pulse, which we can control via the Potentiometer so if you want to change the time of glow, you can do so by varying the potentiometer, having the responsibility for the timing. LEDs are not connected directly with 4017 counter, as the lights won’t be stable. We have used the combination of 1N4148 diodes and the LEDs in order to get the appropriate output. Main drawback of this circuit is that you can never have an exact timing with this, however you will have best estimated.
Tags
555 Timer DIY How to Mini-Project Timer Timer 555
Electrical Technology
44 2 minutes read
Show Full Article
Facebook Twitter LinkedIn Tumblr Pinterest Reddit VKontakte Skype Messenger Messenger WhatsApp Telegram Share via Email Print