What is Distributed Control System DCS?

In recent years, the use of smart devices and field buses makes distributed control system (DCS) to be prominent in large and complex industrial processes as compared to the former centralized control system. This distribution of control system architecture around the plant has led to produce more efficient ways to improve reliability of control, process quality and plant efficiency. 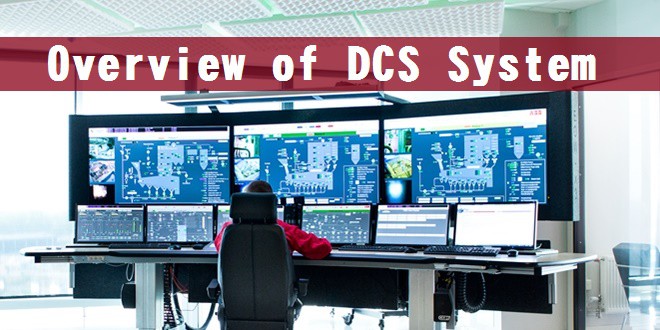 What is DCS System?

It differs from the centralized control system wherein a single controller at central location handles the control function, but in DCS each process element or machine or group of machines is controlled by a dedicated controller. DCS consists of a large number of local controllers in various sections of plant control area and are connected via a high speed communication network. 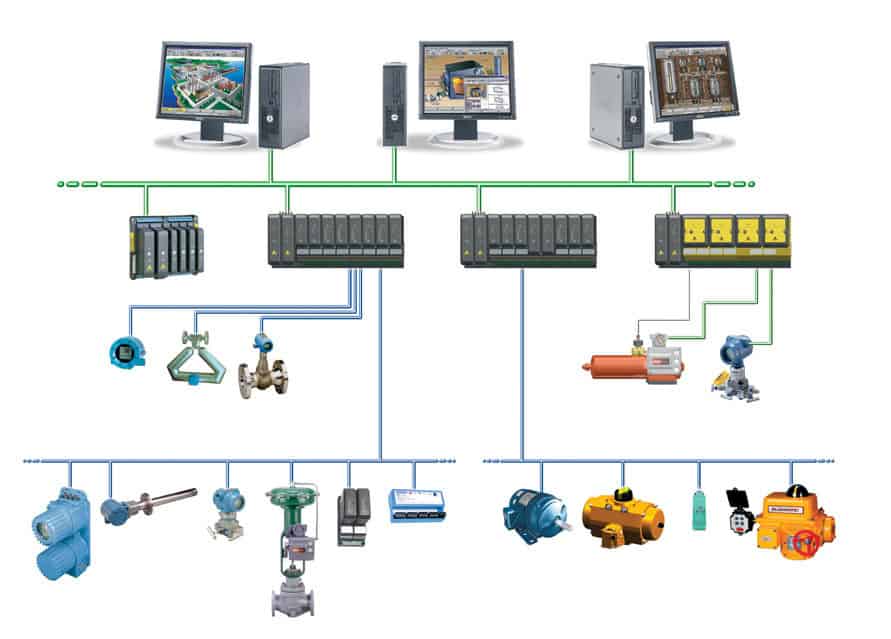 In DCS control system, data acquisition and control functions are carried through a number of DCS controllers which are microprocessor based units distributed functionally and geographically over the plant and are situated near area where control or data gathering functions being performed as shown in the figure above. These controllers able to communicate among themselves and also with other controllers like supervisory terminals, operator terminals, historians, etc.

DCS is most suited for large-scale processing or manufacturing plants wherein a large number of continuous control loops are to be monitored and controlled. The main advantage of dividing control tasks for distributed controllers is that if any part of DCS fails, the plant can continue to operate irrespective of failed section.

You may also read: What Exactly Is A Smart Grid?

As the name suggests, DCS has three main qualities. The first one is the distribution of various control functions into relatively small sets of subsystems, which are of semiautonomous, and are interconnected through a high speed communication bus. Some of these functions include data acquisition, data presentation, process control, process supervision, reporting information, storing and retrieval of information.

The second attribute of DCS is the automation of manufacturing process by integrating advanced control strategies. And the third characteristic is the arranging the things as a system. DCS organizes the entire control structure as a single automation system where various subsystems are unified through a proper command structure and information flow.

These attributes of DCS can be observed in its architecture shown in the diagram below. The basic elements comprised in a DCS include engineering workstation, operating station or HMI, process control unit or local control unit, smart devices, and communication system. 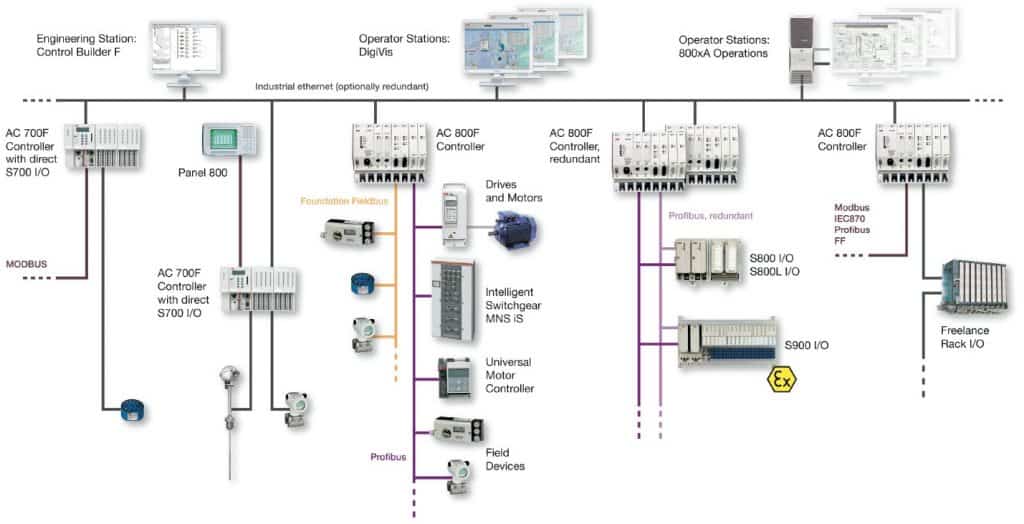 You may also read: What is PID Controller & How it Works?

This is used to operate, monitor and control plant parameters. It can be a PC or any other monitoring device that has a separate software tool on which operator can view process parameter values and accordingly to take control action. For instance, it is a DigiVis software tool that can run on a simple PC-environment in case ABB DCS. 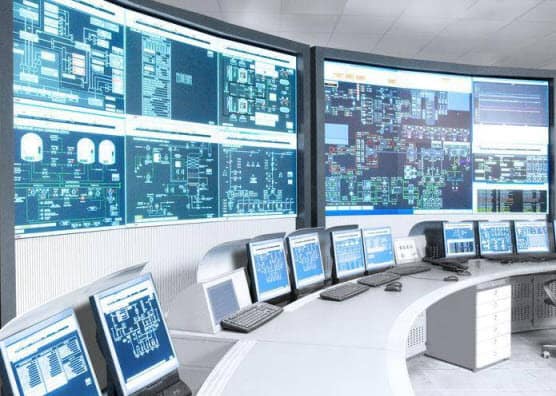 It is also called as a local control unit, distribution controller, or process station. A distributed control system can consists of one or more process stations that can be extended with different types of I/O units. These controllers consist of a powerful CPU module, field bus or communication module with extended field bus capability and either direct or remote connected I/Os. 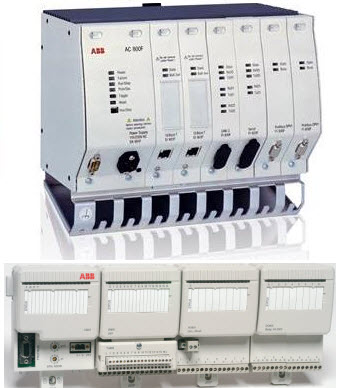 These units acquire the information from various sensors via input module, analyze and process it based on the control logic implemented and sends the output signals via output modules to have control on actuators and relays.

In case of <rel “nofollow” a href=”http://new.abb.com/control-systems/essential-automation/freelance/controller/ac800f” target=”_blank”>ABB DCS, AC800F module (consider, for instance) acts as process station, which is responsible for acquiring and controlling the data from the process. This unit consists of a power supply along with CPU section, Ethernet section, Profibus section and remote communication interface unit for I/Os interfacing as shown in the figure where first module is AC 800F unit and other one is remote I/O (also called as communication interface module).

YOu may also read: An Overvew of DC Drives

The communication medium plays a major role in the entire distributed control system. It interconnects the engineering station, operating station, process station and smart devices with one another. It carries the information from one station to another. The common communication protocols used in DCS include Ethernet, Profibus, Foundation Field Bus, DeviceNet, Modbus, etc.

It is not mandatory to use one protocol for entire DCS, some levels can use one network whereas some levels use different network. For instance, consider that field devices, distributed I/Os and process station are interconnected with Profibus while the communication among engineering station, HMI and process station carried though Ethernet as shown in the figure below. 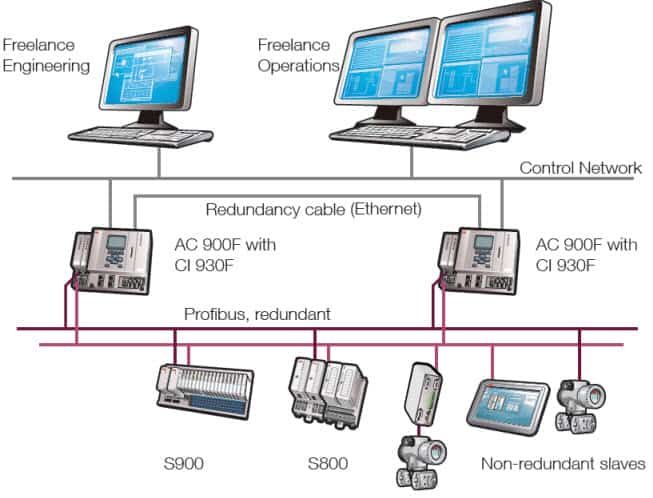 The major advantage of DCS is the redundancy of some or all levels of the control area. Most of the cases critical processes are installed with redundant controllers and redundant communication networks such that problem in main processing line should not affect the monitoring and control functions because of the redundant processing section.

You may also read: Overview of AC Drives and VFD

These field devices can be directly connected to field bus so that sourcing of multiple measurements to the next higher level control station is possible via digital transmission line by eliminating extraneous hardware such as local I/O modules and controllers. 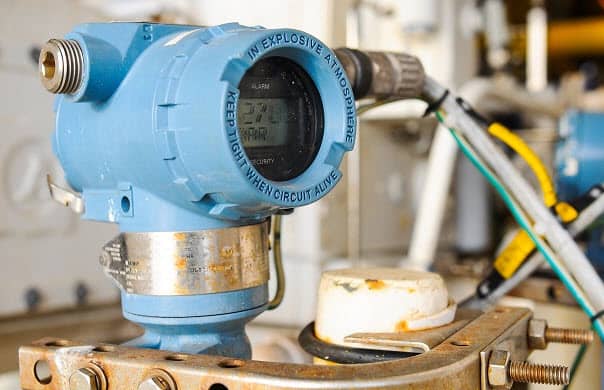 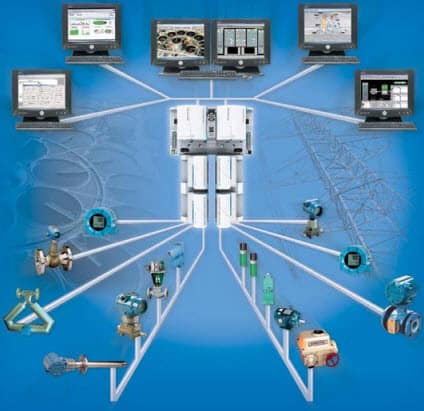 The collected information is further processed, analyzed and produces the output results based on the control logic implemented in the controller. The results or control actions are then carried to the actuator devices via field bus. The DCS configuring, commissioning and control logic implementation are carried at the engineering station as mentioned earlier. The operator able to view and send control actions manually at operation stations.

you may also read: Power Distribution in Industries

Difference between SCADA and DCS (DCS vs SCADA) 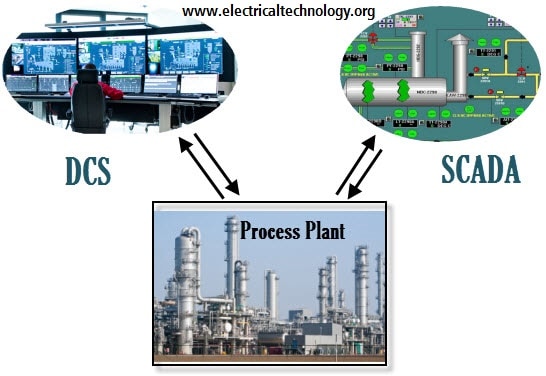 In spite of these major differences, the modern DCS and SCADA systems come with common standard facilities while dealing process plant automation. However, the choice between DCS and SCADA depends on its client and end application requirement. But if the client choice between these two, by gaining equal requirement from the process, DCS is the economical choice as it help to reduce the cost and offer better control.

Some of the available DCS systems include

You may also read: What is Internet of Things?

What is Negative Feedback Amplifier Systems ?