Note: This is an up-to-date article about Different types of Solar Panels and Photovoltaic Cells and we will update it in the future as well according to the latest technologies in solar power system.in the future. Make sure to bookmark this page for future reference or latter read. Also, don’t forget to share with your friends as well as subscribe and join our blog and don’t miss even a single post related to the topics :)

PV and Solar Panels Types with Pros and Cons 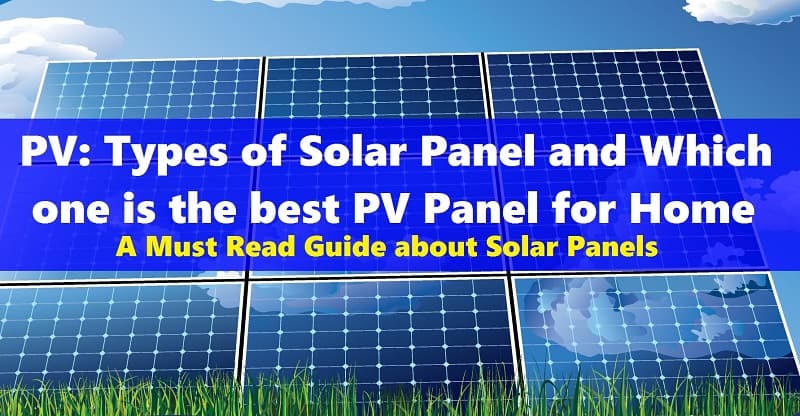 Different Types of Solar Panel and Which one is the best PV Panel for you?

If you have decided to buy solar panels for your final design, but don’t know that which one is most suitable for you? Then this article is for you and for those as well who want to know more information and detail about different kinds of Solar panels and photovoltaic cells.

If you pick the topic, you will learn:

We hope that some of them will help to lead you to the right decision without any confusion to select a proper solar panel.

There are many factors to use the silicon in photovoltaic technology but the important one is purity of silicon, which means the more purification in silicon, the more ability of the solar panel to convert sunlight into electricity as output power.

“Mono” means “single”, as the name indicates, The Monocrystalline solar panel cells are made of single pure silicon crystal. It is also called single crystalline silicon because once single crystal used to make the array which provides Solar Panel (PV) purity and uniform appearance across the PV Module.

Monocrystalline Solar panels (PV cells) are in rounded shape and the Silicon crystal bars look like cylindrical in the entire PV module.

To differentiate between Polycrystalline and Monocrystalline PV (Photovoltaic or Solar panel) is that monocrystalline solar cells look cylindrical with rounded edges.

“Poly” means “many or multi”. As the name tells the story, it is made of a number of different pure silicon crystals, combined together to make a solar or PV cell. The shapes of these cells are rectangular and need less silicon as compared to monocrystalline solar panels which makes them less expensive, but their efficiency is also lower than the monocrystalline PV cells (approximately 13.5-17%. It is also called polysilicon or multi-crystalline silicon and first introduces in 1981 in the market.

A process in which multi crystalline silicon strips and foils are manufactured for Photovoltaic (PV) Technology. In this process, high temperature resistance wires are pulled through the molten silicon to form multi –crystalline thin ribbon of silicon crystals. These very thin ribbons then cut into different lengths to form PV and Solar cells. Solar panels made with String Ribbon technology looks the same to traditional polycrystalline PV panels. The process was first developed in the 1970s by Mobil-Tyco, Solar Energy Corp and The Evergreen Solar were the major manufacturer of using String ribbon Technology to make the solar cells. Note that Note that String Ribbon PV panels are also made out of polycrystalline silicon.

Integrating one or more thin layers of PV materials or thin film (TF) on a substrate, e.g. metal, glass, plastic etc. is the basic process to make thin film solar panels and it is a second generation solar cell. The thickness of film varies from a few nanometers (nm) to tend of micrometers (µm) while the much thinner of thin film has been developed. The first generation Crystalline Silicon solar cell (c-SI) uses up to 200 µm silicon wafers.

Following are the subcategories (Types of Thin Film Solar panels) by which PV materials are integrated on a substrate.

Below are the third generation thin film solar cells, which are not available commercially at all and researcher are hopeful to make the dream come true (very soon).

To manufacture an amorphous silicon solar cell one or more layers of photovoltaic materials are sandwiched onto a substrate as a gas spray which is called “vapour deposition”.

Cadmium Telluride thin film solar panels are based on Cadmium telluride and the only PV (Photovoltaic) technology, which is cost effective as compared to Silicon crystalline solar panels in a significant part of the market especially in the multi kilowatt system.

The efficiency of these solar panels tends to be in range between 9-11%.

The commercial production of flexible Copper Indium Gallium Selenide PV cells started in Germany in 2011. They are made of Copper, Indium, Gallium and Selenide by integrating on a substrate like plastic or glass, along with anode and cathode (electrodes) on the back and front side to collect electrical output power. CIGS or CIS solar panel cells have high temperature tolerance and work better in a warm climate, so they work even better when cells deposited on glass.

The efficiency rates for CIGS solar panels typically operate in the range 11-14 %. However, the highest value achieved by National Renewable Energy Laboratory researcher team is 19.9% and again the best efficiency achieved as of October 2013 was 20.8%. In addition, scientists at EMPA, (Swiss Federal Laboratories for Materials Science and Technology) developed CIGS cells on flexible polymer foils with a new record efficiency of 20.4%.

Expect this, many other thin film solar panels are still in the research and gradually growing the development. You may hear more unexpected and interesting news about these developments soon in coming daysJ.

This is not something new, but the same as they may be thin film or Silicon crystalline solar panels or both, in the shape of roof tiles or what the design needs to be. BIPV (Building Integrated Photovoltaic) is designed to be a part of a building like walls, roofs, facades, windows and other things which may fit with photovoltaic materials (Solar Shingles are the best example Building Integrated Photovoltaic [BIPV]). It looks very nice and beautiful, but beautiful things are expensive too ;).

Unfortunately, Building Integrated Photovoltaic BIPV is too much expensive system and less efficient as well as compared to other PV (photovoltaic) cells and Panels. So it is not recommended to homeowners or small scale users to integrate BIPV systems as they are used in huge projects like a 10MW plant in the desert near Las Vegas.

It is a different PV or Solar power system rather than the explanation above. They do not produce the electricity, but convert the solar power into required heat to heat up the water for swimming pool or general purpose usage at home. It is also good to know that some solar thermal or PV panels can even be used for heat and air-conditioning too.

An Organic material (a Semiconductor material which properties lay between in insulator and conductors and used for electrical conductivity) is sandwiched with an inorganic high electron conduction material to form the photovoltaic (PV) layers. Which efficiency is greater than the single material layer and has both the advantages of organic and inorganic semiconductor masteries.

The hybrid PV cells are low cost by R2R process (roll-to-roll or Real-to-Real process: creating electronic components and devices on a flexible plastic roll or metallic sheet and foils) and developing solar power conversion as well.

The most efficient hybrid solar panels available are Panasonic (formally Sanyo) HIT PV module with Incredible 18.6% efficiency, which takes less space on the roof as well.

Hybrid solar panels are very expensive then poly or monocrystalline PV panels. If you have a lot of space on your roofs, then it is not recommended to use the hybrid solar panel system otherwise you are wasting your money to generate the same electrical power as you generate with crystalline solar panels.

Which is the best type of Solar Panel for Home Use?

As we know that “Cost and space” is the main factors for proper PV panel selection, so we will briefly discuss the topic.

As the majority of us haven’t large space on their roof, windows etc, than thin film solar panel are not for you. Obliviously, but crystalline base solar panels in the best choice then, and if size really matter, then go for the highest rated out power solar panels because the same sizes PV panels have the different rating such as 60W, 150W, 200W etc.

If size matter, Then which one is best? Mono or Poly crystalline Solar panel

Both are good for you with the same advantages except that monocrystalline solar panels are more space efficient and produce little more electrical power than polycrystalline but this is not always the case.

Now it depends on you that for which one you go for.

PV panel prices are typically listed as Cost per Watt ($/Watt). If you want to go for the cheapest price per rated power, then you would have to compare the prices of different available mono and polycrystalline solar panels available in the market and internet. For example, the Talesun Solar panel (model is TP660P-235) is the cheapest PV panel and rated about 235W with the price of $183. So the price per Watt becomes $0.75. On the other hand, the EcoSolargy solar panel (ECO230S156P-60) is a more expensive PV panel and its rating is 230W with the price of per watt of about $1.

Out Put is King

PV manufacturers give warranty on the Solar panels about 25-30 years. But keep in mind that the performance of solar panels gradually degrades over the time and overall performance remains 80% when it’s near to expire. Therefore, don’t compromise on Solar panels output power and leave your designed solar panel installation system reliable. Again! Don’t go for cheap PV panels otherwise you will have to pay the price once again :P.

Now! It is your turn.

Please tell your story in the below comment box and share your precious feedback and experience, because it would be too much helpful for other electrical engineers, students and readership. Also, don’t forget to share with your friends and subscribe by entering your E-mail address and hit Enter. This way, you will get the related and latest informative stuff about Electrical and Electronics Engineering and Technology in your email inbox.