Energy Efficient Lighting & How to Implement It

It has been estimated that lighting accounts for about 20% of the total power generation of the world. The quality and quantity of light not only affects our health, comfort, safety and productivity but also affects the economy. Many nations have been spending a huge amount of their electricity budget on lighting. 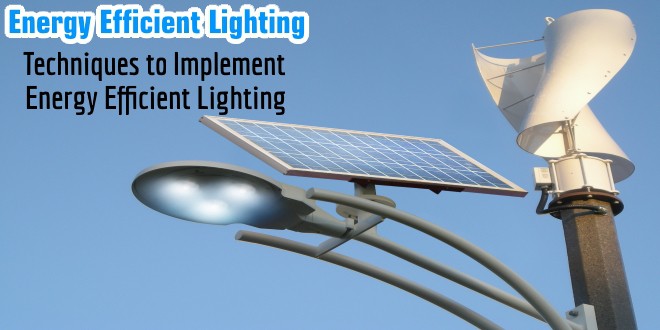 For achieving efficient use of electricity, nations have been taking a sustained switch to the energy efficient lighting which is the most cost effective and reliable method of energy-saving. A well known technologies have been in use in the area of lighting to optimize the existing controls and lighting equipment for reducing the energy consumption with higher lighting quality. Let us discuss in detail about this concept.

What is Energy Efficient Lighting?

When the energy usage of a product is reduced without affecting its output or final response or user comfort levels is referred as energy efficiency. An energy efficient product consumes less energy to perform the same function when compared to the same product with more energy consumption. 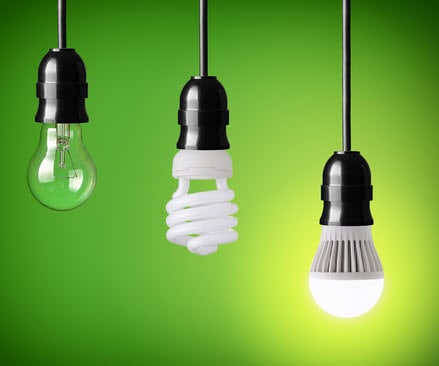 Energy efficient lighting involves in replacement (or re-lamping) of traditional lamps (such as incandescent lamps) with that of energy efficient such as fluorescent lamps, CFL lamps and LED lamps. It also incorporates proper lighting controls such as timer controls, PIR and ultrasonic sensors based controls, etc.

It includes the turning off lights automatically when they are not in use, especially during daylight. It uses electronic chokes instead of ballasts in case of conventional lighting and also with the use of electronic circuitry; it can achieve dimming of lights when necessary.

What is the Need for Energy Efficient Lighting?

Lighting is the basic requirement of any facility and it impacts the day-to-day activities of the people. This accounts a considerable amount of total energy consumption in domestic, commercial and industrial installations.

So it becomes an important area wherein energy to be conserved, especially in the domestic sector. Lighting efficiency solutions therefore play a key role in energy saving opportunities. 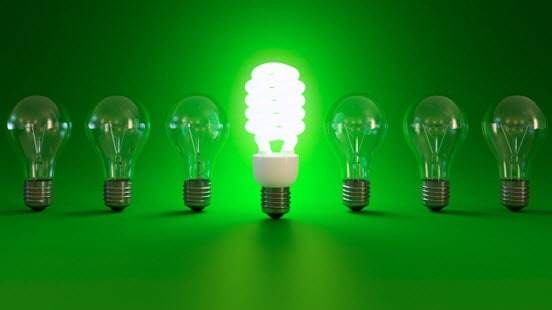 Due to the high energy consumption, traditional incandescent lamps and high discharge lamps have to be substituted with energy efficient lamps. Traditional lamps not only consume large amounts of electric power, but they use much of its consumed energy to produce heat rather than light (for instance 90% of consuming energy in case of incandescent lamps).

With the installation of energy efficient lighting, the amount of energy consumption eventually will get reduced and it results in lower electricity bills.

You may also read: How much Watts Solar Panel We need for our Home Electrical appliances?

The best and effective solution for energy conservation is the adoption of energy efficient lighting technologies in the lighting sector, which facilitates comprehensive redesigning of lighting and control systems.

There have been major improvements and innovations in lighting technologies which can offer a great potential for energy savings in many lighting applications such as household lighting, street lighting, hospitality and retail spotlights, office and industrial lighting, etc.

The following are the techniques or types of energy efficient lighting which are commonly practiced as energy-saving opportunities. 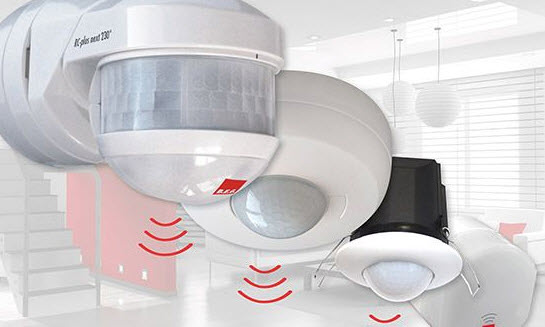 Energy efficient lamps can deliver the same amount of lighting with greater energy saving at low cost, when compared with conventional lamps. Traditional incandescent lamps consume a lot of energy to produce light in which 90 percent of consumed energy is given off as heat and also they consume more energy, typically 3-5 times more than the actual amount to produce light. 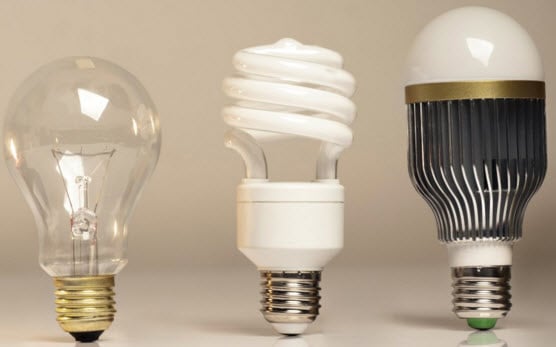 CFL lamps are miniature or curly versions of long-sized fluorescent tubes. These lamps combine the efficiency of fluorescent lighting with the popularity and convenience of incandescent fixtures.

They screw in to the fixtures that allow all standard incandescent lamps, but not into standard fluorescent fixtures of long tubes. Depending on the brand and application use, they come in different range of styles, colors and sizes. 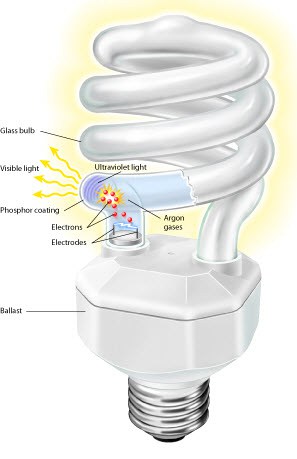 These lamps are made with a phosphorous glass tube consisting of inert gas (argon) and mercury vapor. They use an electronic ballast to create high voltage during the starting and it can be a separate unit or permanently built in lamp. Some special and older models of CFLs come with separate ballast while some CFLs come with inbuilt ballast.

When an electric current is passed through the electrodes, the electrons that are bound to mercury atoms are excited which in turn emits ultraviolet light. As UV light strikes the fluorescent coating, it will be converted into visible light. 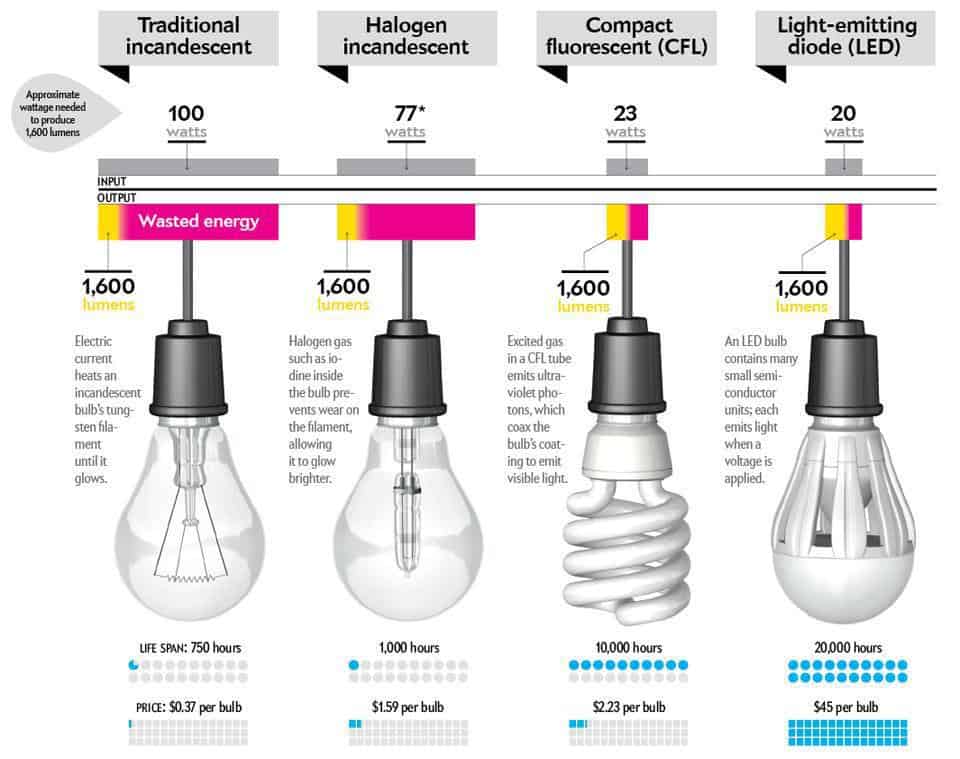 There are different types of CFL lamps available in today’s market. Some of these are spiral lamps, triple tube lamps, standard lamps, globe lamps, flood lamps and candelabra lamps. In case of replacing incandescent lamps, CFLs are chosen to match lumens that indicate the amount of light being generated as shown in figure below. 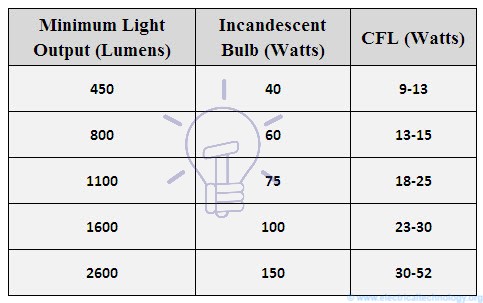 LEDs are solid state semiconductor devices and are more energy efficient than even CFLs. They produce little heat and higher quality lighting than any other lamp. At the time of inception the usage of LEDs was limited as single bulb indicators in electronic circuits.

Later a number of LEDs are clustered to develop small lamps in battery powered devices such as charging lights, flashlights, etc. Today, LED lamps are available in many new bulb styles which are bright enough to replace traditional incandescent lamps. 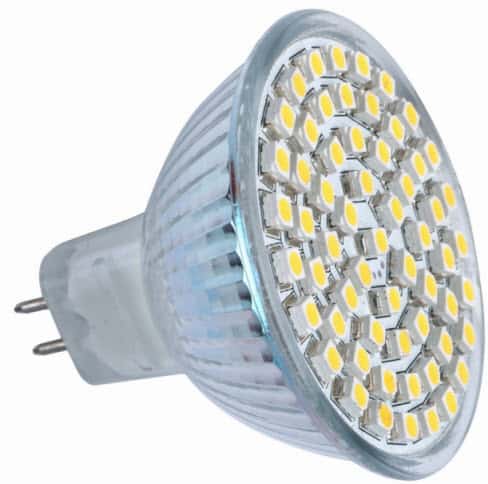 LEDs are made up of semiconductor materials to form PN junctions. Whenever current flows across these junctions, it releases the energy in the form of a light. The wavelength and hence the color of the light depends on the composition of materials. LEDs can generate yellow, red, blue, green and white light. For lighting purpose several white color LEDs are stacked as clusters to produce required lighting for an application.

LED bulbs are available in different shapes, sizes and styles according to the type of application it is intended for. Some of these types include diffused bulbs, dimmable globe LED bulbs, track lighting pin-base type bulbs, flood reflector screw-in base bulbs, flame tip candelabra base LEDs and LED tube lights.

Comparison of incandescent, CFL , LED and halogen bulbs and lamps. 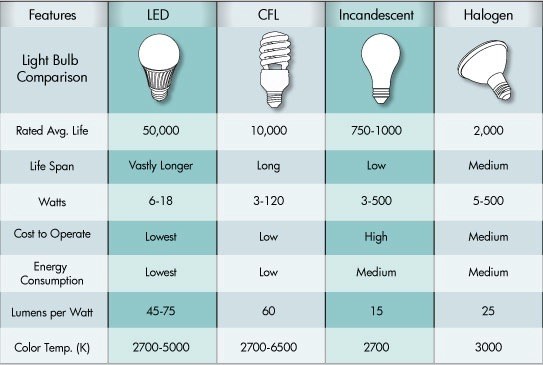 Lighting can be controlled with the use of various sensors to allow the operation of lamps whenever they are needed. These sensors detect the presence of humans, motion, timing or occupancy and based on the sensor output, it switches the lamps ON and OFF. Types of these controls include infrared sensors, automatic timers, motion sensors (PIR and ultrasonic sensors), and dimmers.

Photo sensors monitor the daylight conditions and accordingly send the signals to main controller to turn the lamps automatically off at dawn and on at dusk. This type of lighting control is commonly used with street lighting and outdoor lighting. 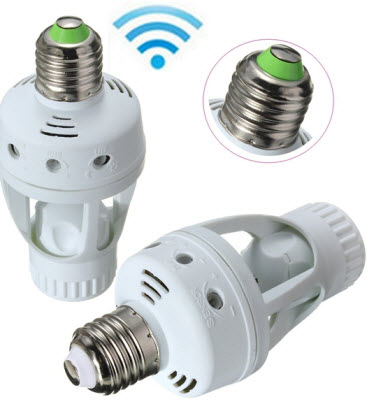 Street lighting is another major area of energy conservation as it contributes considerable power consumption especially in the highways. Centralized control systems are most commonly used in street light control. 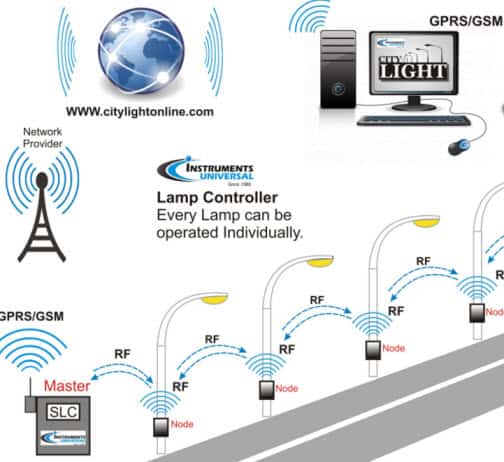 Some fixtures can absorb more than half of the illumination emitted the bulb that reduces the efficiency of the lighting. The higher efficiency fixtures can emit more light and hence one can save energy and money. Such fixtures consist of reflectors to direct the light in a desired direction. 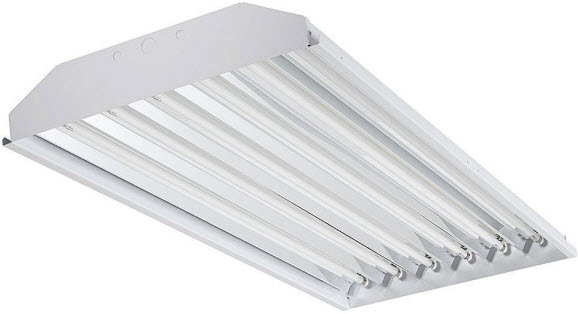 All discharge lamps require a ballast for achieving required operation. Conventional magnetic type ballasts cause power losses which is typically 15 percent of the lamp wattage. It also can raise fixture temperature during operation. So the proper ballast must be chosen to reduce ballast losses, fixture temperature and system wattage. In today’s market, many electronic or solid state types of ballast are available which can save 20 to 30 percent energy consumption over standard ballasts.

What are Industrial Communication Networks? An Overview

Lighting Design Calculation in a Building - Step by Step