What is Logic NAND Gate?

NAND Gate is a digital logic gate (Also known as Universal gate) produces logic LOW State “0” only and only when there is HIGH State “1” at all of the inputs.

NAND gate is opposite /Invert of AND gate, in other words, if we connect NOT gate to the output of AND gate it will become NAND gate.

Usually, NAND gate has two inputs and 1 output but it can have as many inputs as you want according to your design. It is the reversal of AND Gate.

There are 3 types of symbols used for NAND gate all over the world. 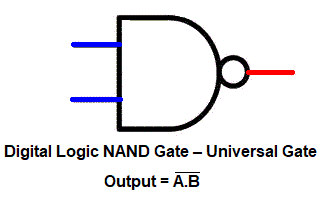 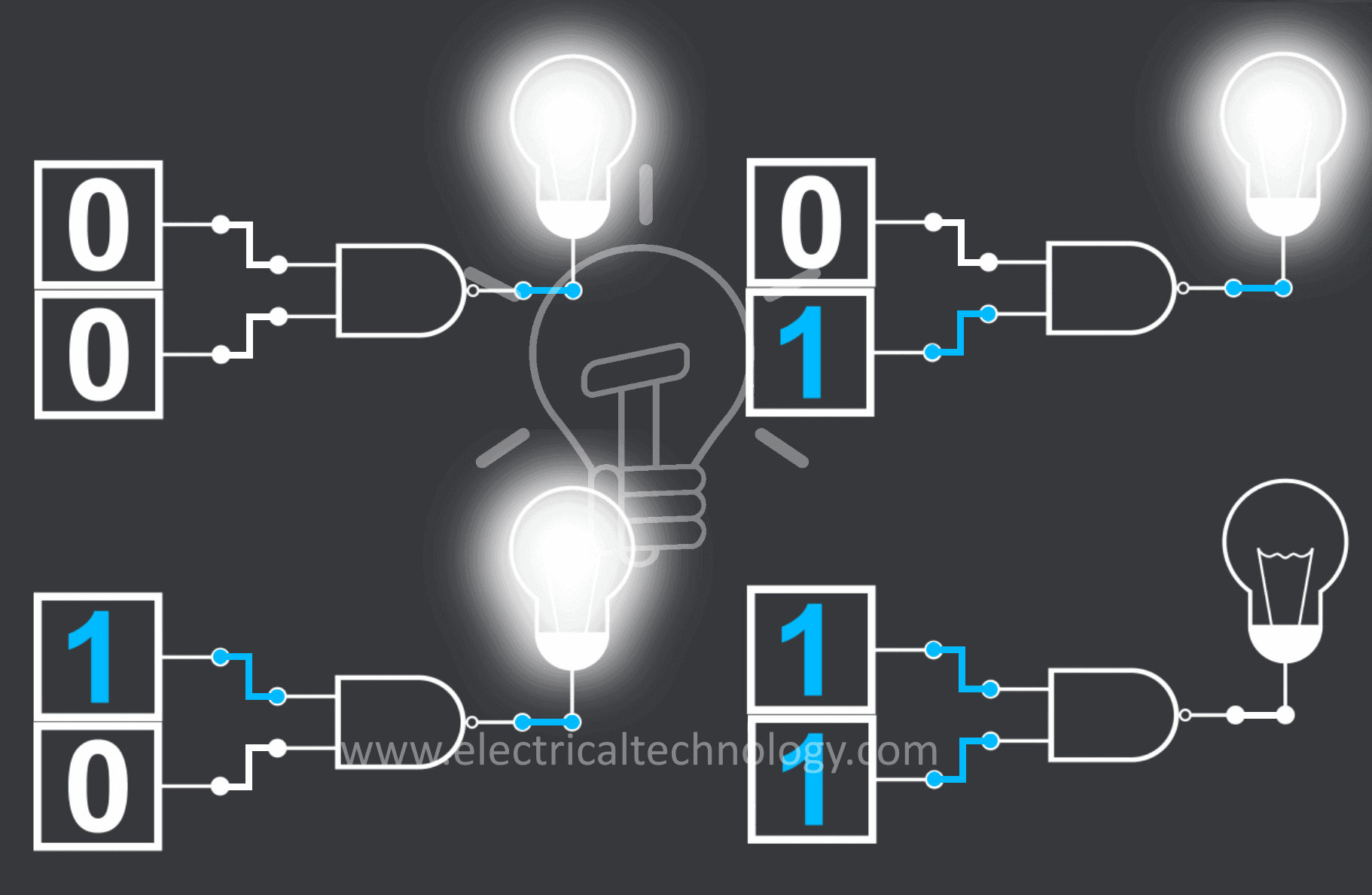 In Resistor-Transistor logic (RTL), Bipolar junction transistors (BJTs) are used as switching unit. NAND gate schematic in RTL logic is given in the figure below.

In this schematic two NPN BJTs are used in the series configuration.

NPN transistors are active high, which means they will turn on when there is high state “1” at its base input and it will start conducting current. When there is logic LOW state “0” input then it will turn-off.

According to this schematic, when there is logic HIGH state “1” at both input lines, the transistor will switch on and the path from GND to output will be complete, thus resulting in logic LOW state “0” output.

When there is logic LOW state “0” at any or both input lines, then the NPN (one or both) will switch-off, cutting the path to the output and the only path remaining will be Vcc to output. Which will result in logic HIGH state “1” at output.

The truth table of the described schematic is given below. 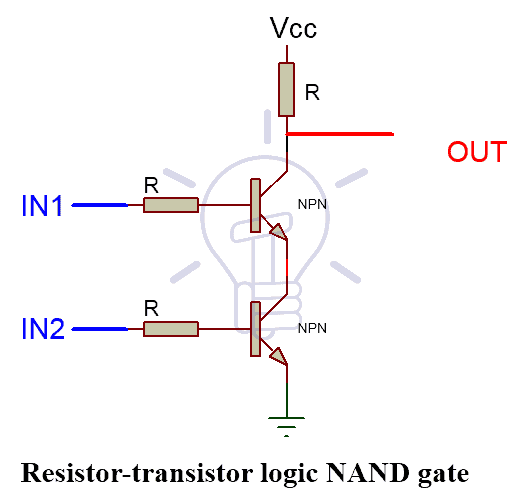 In MOS logic, MOSFETs are used as the main switching unit.

Contrary to RTL logic, MOS logic uses MOSFETs instead of BJTs. MOS logic schematic of NAND gate is given below.

NMOSFET is active high, which means it switch-on when there is high state input at its gate and it starts conducting current. And its witches off when its gate input is logic LOW state “0”.

According to this schematic, when there is HIGH state “1” at its both input lines, these both NMOSFETs will switch on, resulting in creating a path from GND to output. Which will result in logic LOW state “0” as output.

the Truth table of the following design is also given below. 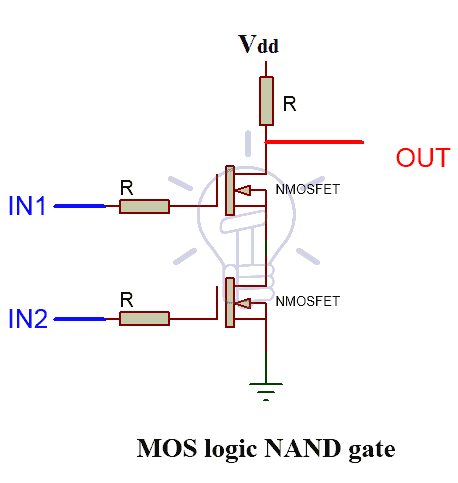 NAND Gate From Other Gates

NAND gate function can be achieved with the combination other gates. Some of them are given below.

NAND Gate is a Universal Gate. The universal gate is a gate which can be implemented into any other logic gate or logic function. Some of the basic gate‘s implementations are given below.

NAND from NOT Gate

NAND gate can be used as NOT gate if we combine its input together into a single input.

NAND from AND Gate

NAND gate is opposite/invert of AND gate and vice versa. So inverting output of NAND gate will result in AND gate. To invert NAND gate‘s output, we have to use NAND gate with combined inputs which work as Inverter/NOT gate. The figure of implementation of AND gate from NAND gates is given below.

NAND from OR Gate

To better understand the implementation of OR gate using NAND gate one need to know about Boolean algebra and De Morgans law.

Conversion of NAND to OR gate Boolean Algebraic expression is given below. 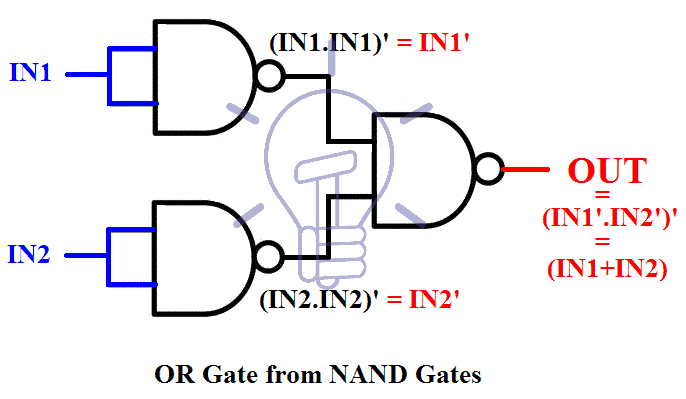 NAND from NOR GATE

NOR gate is invert of ORgate.OR gate design will be the same as illustrated above. There will be an Inverter/NOT gate at the output of OR gate as shown in the figure given below.

As we have established before that NAND gate’s output will be logic LOW state “0” only and only when there is logic HIGH state “1” at its all input lines.

NAND gate truth table with ‘n’ inputs is given below.

As you know, BJTs are the switching unit in RTL and they are connected with separate input lines. Hence connecting another NPN BJT in the series configuration can increase the input lines.

A 3-input NAND gate schematic in RTL is shown in the figure given below. 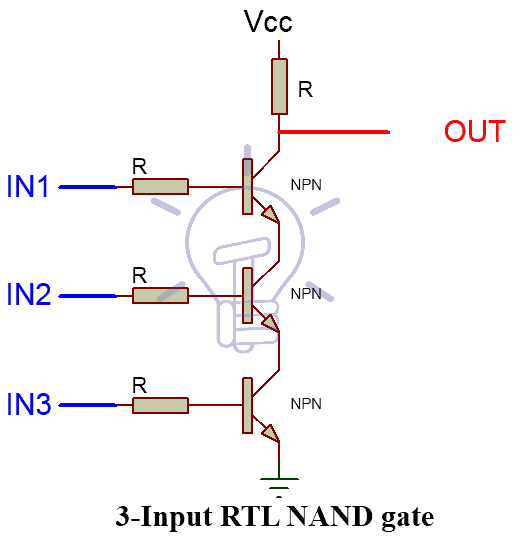 A 3-input NAND gate schematic in MOS logic is given below. 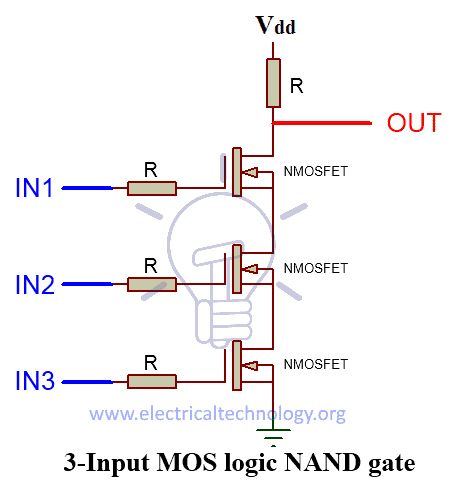 Commercially up to 8-input NAND gate’s IC are available in the market. Some of the commonly used IC’s details are given below.

Logic NAND gate can be used in the following appliances and systems.