INSULATION RESISTANCE OF A CABLE 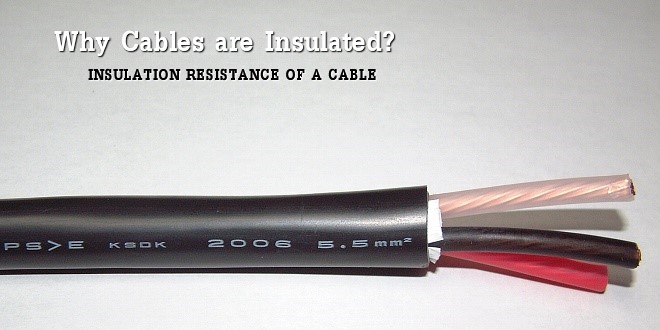 WHY CABLES ARE INSULATED? An INTRODUCTION

With the exception of power transmission cables that are on electric poles, almost all the cables that are in use today are insulated. The level or degree of insulation resistance of a cable depends on the purpose for which the cable was designed for. Apart from saving energy from being lost or dissipated to the surrounding, one paramount reason why cables are insulated is to save us from the danger of being electrocuted.

Electricity is very dangerous. The first touch can be the last touch and it never gives even a single chance. A slight touch of a cable carrying electric current can lead to a fatal accident . Our body conducts electricity partially. When our body comes in contact with a current carrying conductor, the electric current will tend to flow from the conductor then to our body. Our body being a partial conductor will not be able to conduct away the electric current. When the current too much than our body can contain, it then kills the person is question.

In order to avoid this kind of accident in our homes, it became necessary that cables be insulated. The insulation prevents current leakage as well as from reaching us thereby preventing us from being electrocuted.

WHAT IS AN INSULATOR?

An Insulator is a material or a substance that do not conduct heat or electricity. Insulators do not conduct heat or electricity because they have no free moving electrons. Conductors are said to be insulated when they are covered with an insulating materials such PVC etc. The process is called insulation. The insulator around the conductor prevents electrical energy and signals from escaping to the surrounding.

EFFECT OF TEMPERATURE ON INSULATED MATERIALS

INSULATION RESISTANCE OF A CABLE

Cable conductor is provided with an insulation of suitable thickness to avoid the leakage of current. The thickness of any cable depends on the purpose of its design. The path of current leakage in such cable is radial. The resistance or opposition offered by the insulation to the flow of current is also radial throughout its length.

For a single core cable conductor of radius r1, internal sheath radius r2, length l and insulation material resistivity ρ, the perimeter of the conductor is 2πrl. The thickness of the insulation will be given as dr.

When integrated, we will have:

Rins is inversely proportional to 1/l contrary to R = ρl. Where ρ (rho) is a constant known as resistivity.
There are some cables that have more than one insulating layers and more than one core. The main wire being at the center, serve as the main conductor. The other core serves the purpose of grounding and preventing the electromagnetic waves and radiations from escaping from the cabled. It serve as a shield. Cables under this category is the Coaxial cables.

Coaxial cable conducts electrical signal using an inner conductor (the inner or main conductor could be any good conductor but copper is mostly preferred because of it’s low resistivity, the copper could also be plated) is contained in mostly PVC case. Before the outer PVC case, there are two or more other insulators with either aluminum foil or copper strand between them. The cables are protected from external environment by the outermost PVC case. While voltage is passed through the inner conductor, the shield or case has little or no voltage passing through it.

The advantage of coaxial design is that electric and magnetic fields are confined to the dielectric with little leakage outside the shield. Due to the level of insulation in the cables which prevents outside electromagnetic fields and radiations from penetrating into it, interference is avoided. Since conductors with large diameter have less resistance, less electromagnetic field will be leaked. The same goes for cables with more insulation. Knowing that weaker signals are easily interrupted by little interference, cables with more layers of insulation are always good choice for conveying such signals.

FEATURES of an INSULATED CABLE

Having noted that cable insulation resistance is determined by its purpose of design, there are some factors that an engineer would have to consider before designing a cable. Coaxial cables would require more insulation because the cable will not only prevent power leakage, it trap the electromagnetic radiations. The insulation ranging from one layer to two, three or four. Cables are engineered for different purposes.

Below are some features that insulated cables have;