Difference Between AC & DC Resistances & How to Calculate it?

The property of a substance or material which oppose the flow of electricity through it is called resistance OR,

Resistance is the ability of a circuit or element (which is called resistor) to oppose the flow of current through it.

Unit of Resistance is “Ohm” and it is denoted by Ω and it is represented by “R”. 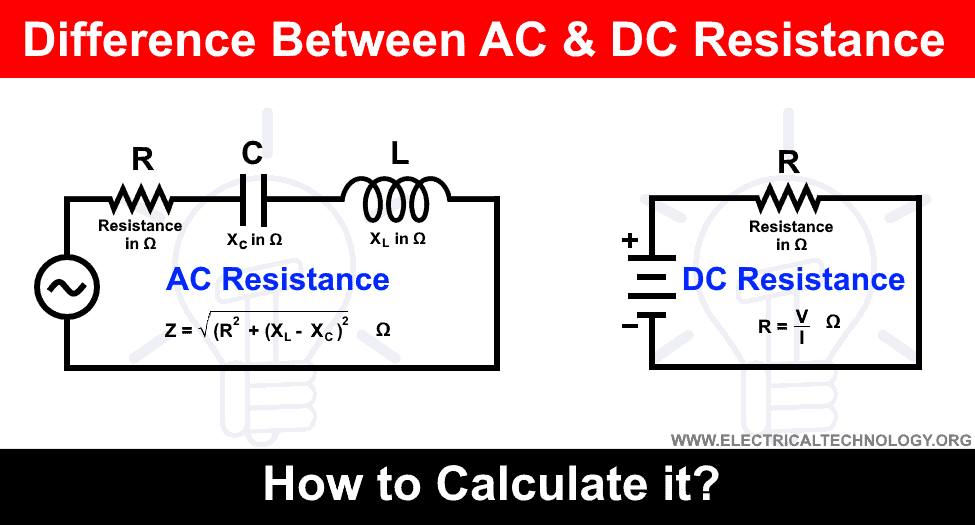 In Simple words, Resistance in AC circuits is called Impedance. Or

When AC Current pass through a wire (resistor, inductor, capacitor), then current produces a magnetic field across that wire which opposes the flow of AC Current in it along with the resistance of that wire. This oppose cause is called Inductance or Inductance is the property of Coil (or wire) due to which opposes any increase or decrease of current or flux through it. Also, we know that inductance is only exist in AC because the magnitude of current continuously changing

That’s why the resistance offered by a wire is lower for DC than AC as will as AC lines need more insulation than DC.

In DC Circuits, we calculate the resistance by Ohm’s Law.

Which One is More – AC or DC Resistance ?

As we know that frequency in DC supply is zero, so there is no skin effect (a behavior of alternating current to flow through the surface i.e. outer layer of a conductor instead of the core of the wire). in DC circuits. Due to the skin effect, AC resistance are more in AC circuits than DC supply in DC circuits.

As a rule of thumb;

Testing Electrical and Electronics Components and Devices with Multimeter