Magnetic Field or Magnetic Induction (B)

Magnet or Electromagnet produces a Magnetic field. The field where the magnet attracts or repels magnetic materials such as iron, steel, etc. it may be defined as a force on a moving charge,

The amount of magnetizing force (how much force it has to magnetize, magnetic materials such as iron, steel, etc) is called Magnetic field strength which is denoted by (H). It is inversely proportional to the length of wire and directly proportional to the current passing through it. The SI unit of Magnetic Field Strength is Ampere/meter (A/m) and it is a vector quantity and the SI formula for Magnetic Field strength is

Where 1c = magnetic path in meter.

And CGS unit and formula for Magnetic Flux is Maxwell (M) and Φ = BAc Ac = area in cm2 respectively.

In funny words, Perm = Permission and ability is the feature or skill to do something. I.e. permeability (µ) it is the ability of a material that how does it easily magnetize?

It is the amount of resistance encountered to the magnetic field when forming in a vacuum.

Good to know: The opposition of magnetic permeability is Magnetic Reluctivity.

Good to Know: Famous magnetic relation is B = µH where µ is permeability which is a scalar quantity, B is the magnetic field and H is magnetizing force or Magnetic Field Strength.

Even The change of current flowing through a conductor or coil produces voltage through it which is called Self induced EMF and in any nearby coils or conductors which is called Mutual inductance. The SI unit of Inductance (L) is Henry “H” and formula is

Or the electric potential energy per unit charge is called Voltage.

The SI unit of Voltage is the Volt (V) or Joules per Coulomb. Where 1V = 1Joule/1Coulomb

The SI formula of Voltage is

The following table shows all the above basic terms used in magnetic circuits with SI and CGS units and formula.

Following is the table in image format as a ref. 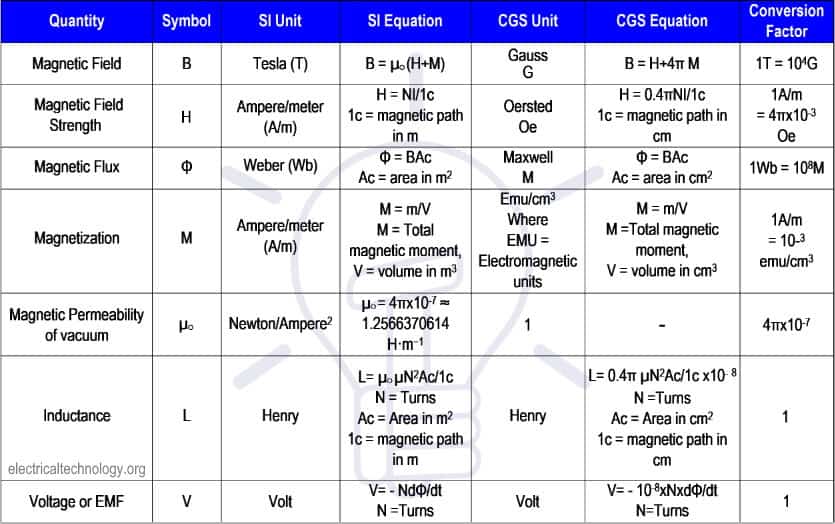