Transformer are Always Rated in kVA instead of kW

As the name suggests, a transformer only transfers the power from one circuit to another without changing the value of power and frequency. In other words, It can only step up or step down the value of current and voltage while the power and frequency remain the same. A general data on the transformer nameplate is printed for further details, such as rating in VA, single phase / three phase (power or distribution transformer), step up / step down, connection etc.

Right to the question, In simple words,

There are two type of losses in a transformer;

Let’s explain in more detail to get the idea of why a transformer is rated in VA instead of kW?

When manufacturers design a transformer, they have no idea which kind of load will be connected to the transformer e.g they are not sure about the exact applications of transformers in different scenarios. The load may be resistive (R), inductive (L), capacitive (C) or mixed load (R, L and C). It means, there would be different power factor (P.F) at the secondary (load) side on different kinds of connected loads which additionally depends on R, L and C. This way, they they express the rating of a transfpmer in Volt-Amps (VA) instead of  Watts (W) in case of Transformer. 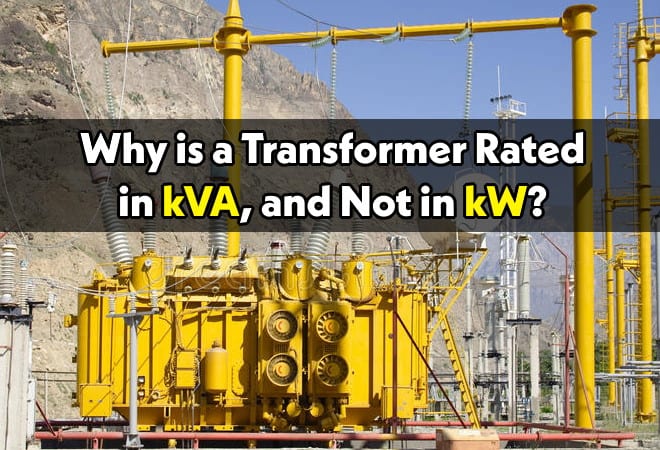 Let’s clear the rating of the transformer in VA instead of W  with a solved example.

Suppose for a single phase step up transformer

In first scenario, If we connect a resistive load to the secondary of the transformer at unity power factor Φ = 1,

Then total losses of transformer would be copper losses + iron losses, i.e.:

i.e. losses on primary and secondary of transfer are still same. (See below example for secondary losses as well)

The transformer output will be:

Again, putting the value from secondary (Same value if we put the values from primary)

Now, In second scenario, connect a capacitive or inductive load to the secondary of the transformer at power factor Φ = 0.6.

Hence proved that losses in both primary and secondary are the same.

But the output of the transformer will be:

Now rating of the transformer:

It means, 11kVA transformer rating means it can handle 11kVA. It is our turn to transform and utilize the 11kVA as 11kW (we can do it by improving the power factor to 1 in case of pure resistive load) which is not predictable and even very hard to get in case of inductive and capacitive loads where the power factor would have different values.

From the above example, it is clear that the rating of the transformer is same (11kVA) but different output in power (11kW and 6.6kW) due to different power factor values after connecting different kind of loads which are not predictable for transformers manufactures where the losses are same in both cases.

So these are the exact reasons for transformer rating in kVA instead of kW.

As like transformer, rating and capacity of Alternators & generators, Stabilizers, UPS, Transmission lines are also rated in VA instead of W while power plant capacity, AC (Air condition) and motors are rated in W (watts) rather than VA (Volt-Amperes).

Why are Generators and Alternators Rated in kVA, Not in kW?