Piezo is a Greek term signifying “press” or “squeeze”. Piezoelectricity (also called the piezoelectric effect) is the presence of an electrical potential across the sides of a crystal when mechanical stress is applied by squeezing it. In working system, the crystal acts like a tiny battery with a positive charge on one face and a negative charge on the opposite face. To make it as a complete circuit, two faces are connected together and current is passed through it. 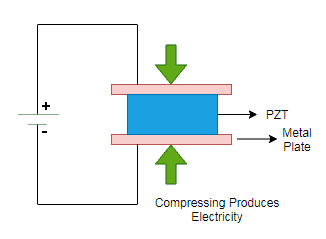 The effect is reversible. Whenever an electric field is applied onto crystal terminals, it undergoes mechanical stress and results in shape change. This is known as Inverse Piezoelectric Effect.

What is a Piezoelectric Sensor?

When pressure or acceleration is applied to the PZT material, an equivalent amount of electrical charge gets generated across the crystal faces. Electrical charge will be proportional to the applied pressure. Piezoelectric sensor cannot be used to measure static pressure. At the constant pressure, the output signal will be zero. Working of a Piezoelectric Sensor can be summarized as,

The piezoelectric sensor circuit is shown below. It consists of internal Resistance Ri which is also known as insulator resistance. An inductor is connected which produces inductance due to inertia of sensor. The value of capacitance Ce is inversely proportional to the elasticity of the sensor material. To obtain the complete response of the sensor, load and leakage resistance should be larger enough such that low frequency is maintained. 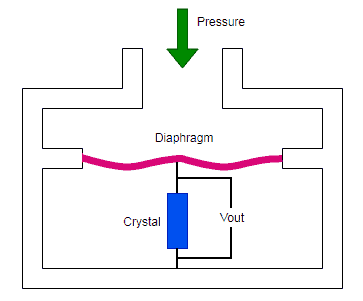 When a force is applied to the piezoelectric diaphragm, it generates electric charge across the crystal faces. The output is measured as voltage which is proportional to the applied pressure.

Ultrasound sensors generate ultrasonic waves. When transducer is held on one hand, its position is kept varying such that the ultrasound wave passes through the body parts to be analyzed and visualized. Sound waves are sent through the body tissue. The waves are reflected back to create the image of the tissue. This is the working principle of an Ultrasound Imaging System. In this, piezoelectric crystals are attached to the front of the transducer, which helps to generate ultrasonic waves. Electrodes act as connecting node between crystals and machine. When electric signal is applied to crystal, due to vibration it generates ultrasound wave of frequencies between 1.5 and 8 MHz

Difference Between Online UPS and Offline UPS - Which One is Better?