Why radio waves are chosen for Remote & close range transmission?

With the use of beasts, dissemination of information was a bit faster and became more and more faster like the speed of lightening with our transition into twenty first century, an era of explored science and technology. Things have really become easier and can be done faster.

You could be sitting in your room and dial a number on your phone and be instantly connected with a friend millions of miles away. The messages we type and send the conversations we make over our cell phones are all conveyed via electromagnetic waves or em wave as others may call it.

There are different types of EM (Electromagnetic waves) wave but we will strictly be focusing on radio wave; what it is? how it is propagated? how it can be detected? and of course how to make a simple radio receiver? In order to understand it better, let’s see some few things first. 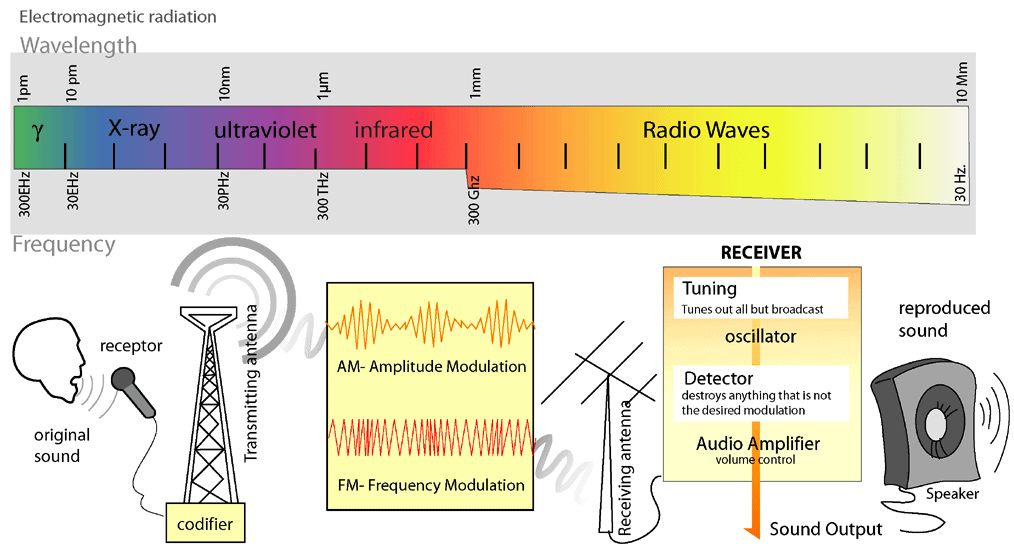 Electromagnetic radiation posses wave properties, i.e, EM wave can be propagated, diffracted, refracted etc. EM wave can be interfered i.e it undergoes interference when an EM wave with the same or close range frequency cross its path. EM wave ranges from radio wave which has low frequency with long wavelength to gamma ray that has the highest frequency and shortest wavelength hence gamma ray has the highest energy.

Radio wave is a form of electromagnetic radiation. It has low frequency which approximately ranges from 150kHz to 100MHz.

When there is a discharge of electricity, electromagnetic radiation of radio frequency is produced. Crackle sound is produced on a radio set when is lightening due to interference between the radio wave produced by the lightening and that transmitted by a nearby station. A small spark around the home may produce a noise on a radio set.

A spark is produced by turning a switch on and off especially those carrying heavy current. Sparks produced by thermostat switches in cookers and refrigerator, spark at the contact of electric bell etc are all liable to produce an EM wave that is detected by a radio set. Early radio transmitters operated on the principle of spark production. Modern transmitters operate differently. They consist of different sections;

A radio transmitter could produce only a continuous strain of radio wave of constant frequency and amplitude if the transmitter contains only an oscillator and a feedback amplifier. The more modulator modulates the frequency (FM).

For some reasons, radio waves are reflected by a parabolic reflector that is aimed at a receiving station many miles away. Reflectors are used for transmission to and from telecommunication satellites and for microwave radio links used in telecommunication system.

When the electromagnetic radiation reaches a metallic object, it produces minute electric current in it. The aerial is used to catch the radio waves.The aerial or antenna carries currents produced by all the nearby transmissions that reach it. When we try to listen to it, we would not hear clear distinct sound because there are many of the sound waves received by the radio receiver.

To hear a distinct sound transmitted by one of the transmitting stations, a radio receiver is used to tune to a particular channel. The receiver consists of;

HOW TO CONSTRUCT A SIMPLE RADIO RECEIVER

To construct a simple radio receiver follow the steps given below:

You think your nearby transmitting station is powerful but still no result? Relax! In that case you need to introduce an amplifier into the circuit. Make your connection as in the diagram. That is a simple radio for you. A radio signal has the least energy and so cannot convey large data at an instance. It’s suitable for local/close range transmission because most of the things transmitted over the radio are audio which the radio wave can convey without delay.

Why radio waves is chosen for remote/close range Transmission ?

You might have wondered why the other em waves are Not used for close range transmission and cannot be used for transmitting the signals to remote areas. Well, Radio waves do not provide heating effect unlike microwave.

Radio waves with lower frequency are diffracted thereby making it possible for people behind hills to receive the signals. Unlike Other em wave, radio wave receivers need not to be in front of a Transmitter to Receive the signals.

For low Frequency radio, their ability to be diffracted makes it possible for signals to be received behind hills. Repeater stations are used to improve the quality of the signals. The other em waves are not easily diffracted.

What is Motor Efficiency and How to improve it?