Transportation of people, goods and services today is no longer a problem as technology is fast growing. Distance is neither a barrier nor a problem. Just as people, goods and services are easily transported across a distant destination, ELECTRICITY is no different. Electricity can be transported over a long distance. But unlike goods, electricity requires a medium through which it is transported. Often times you will notice that the power transmission cables hanging on electric poles are loose. You might have thought “why weren’t the cables fastened tight to the poles?”Let’s find out why the cables are loose on electric poles but before then let’s take a pip at some important tips that would help us understand better. 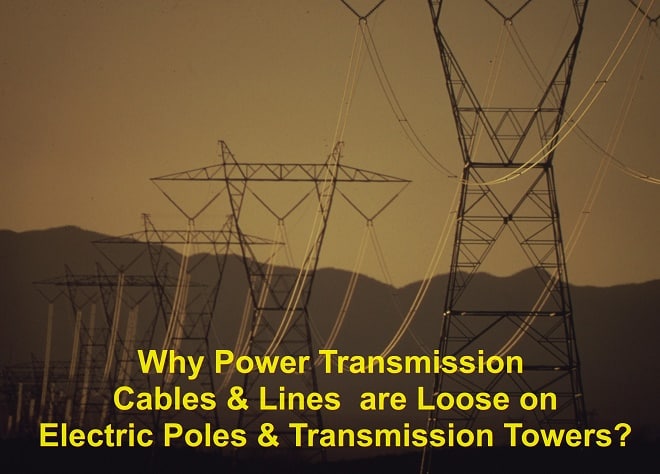 Power is the rate at which work is done. Work is done when electrical energy is covers a distance. By that we can say that power is energy delivered per unit time. Electricity can be transported over a long distance via cables which serve as a medium of transporting the electricity. Power is measured in watts. When transmitting power, high-voltage transmission is preferred so as to save energy. Electric current causes the dissipation of heat and this heat is really not good as it causes the electric cables to wear out and cut that is why in order to save the transmitted power, electric current which causes heat and eventually wearing out of cables must be transported in a small quantity while the voltage in large quantity hence the name High-Voltage power transmission.

There is nothing as a pure metal. The degree of purity of any metal is never 100% pure and as such they have internal resistance. Energy expended or heat generated when current flows through the conductor is given by;
P = VIt
P = I2Rt.

As can be seen from the equation above, Heat (P) generated by the moving electrons is proportional to R, t, I^2.When an electric current flows through a conductor, electric current is being dissipated to the surrounding in form of heat when overcoming resistance which serve as a barrier to the drifting electrons.

EFFECT OF WEATHER AND TEMPERATURE ON ELECTRIC CABLES

Tension a force that exist in a string that is under the action of two forces in opposite direction. Thus a cable hanging on a pole is under tension and would be under more tension if the cables are to made tight which would make the cables to cut easily when little contraction or expansion occurs.

During transmission of electricity, heat is being dissipated. The heat generated by cables is being minimized via high voltage transmission. The effect of weather and the internal temperature of the cable make it necessary to let the cables a little bit loose.

If the cables were made tight and the weather gets cold, it would cause the transmitting cables to contract thereby creating more tension in the cables which might cause it to cut. So, the cables are loose so that even if contraction should occur, there won’t be much tension which would lead to the damage of the cables.

Why Coaxial Cables are Highly Insulated?

Insulation Resistance of a Cable | Why Cables are insulated?