It is known that the polarity of DC voltage and direction of DC current are always same i.e. it is a unidirectional value which does not change the polarity as well as direction as shown in fig 1.

On the other hand, (AC) Alternating Current or Voltage  is one which regularly changes its direction as well as its value. In other words, alternating current (AC) is a type of current which flows first in one direction and secondly, it flows in the opposite direction. In each cycle, it changes the value from zero to the maximum and again hit the zero value.

The value of alternating current or voltage can be express in AC (Sinusoidal) Sine wave as shown in fig (1) below.

In AC, its not possible to represent the magnitudes as its amplitude of AC sine wave continuously changes with time.

This way, we have multiple options to expressed the magnitude and different values related to an AC sine wave such as:

We will discuses all of them in details as follow.

The RMS (Root Mean Square) value (also known as effective or virtual value) of  of an alternating current (AC) is the value of direct current (DC) when flowing through a circuit or resistor for the specific time period and produces same amount of heat which produced by the alternating current (AC) when flowing through the same circuit or resistor for a specific time. 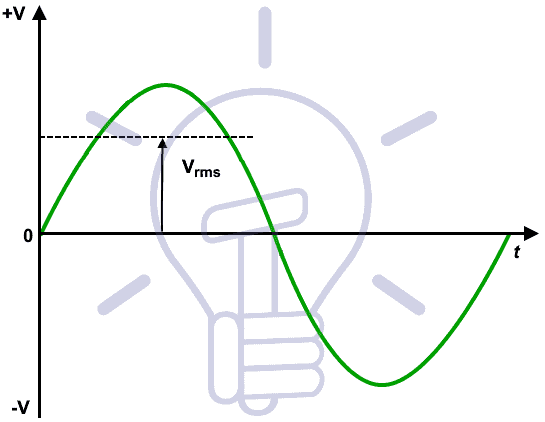 The value of an AC which will produce the same amount of heat while passing through in a heating element (such as resistor) as DC produces through  the element is called R.M.S Value.

The RMS Value of an Alternating Current is that when it compare to the Direct Current, then both AC and DC current produce the same amount of heat when flowing through the same circuit for a specif time period.

For a sinusoidal wave,

In more clear words, The domestic voltage level in US is 110V, while 220V AC in UK. This voltage level shows the effective value of ( 110V or 220V R.M.S) and it shows that the home wall socket is capable to provide the same amount of average positive power as 110V or 220V DC Voltage.

Keep in mind that the ampere meters and volt meters connected in AC circuits always showing the RMS values (of current and voltage).

For AC sine wave,  RMS values of current and voltage are:

To find the RMS value of a sine wave, We may use the following two methods.

Lets see how to find the R.M.S values of a sine wave.

We know that the value of sinusoidal alternating current (AC) =

While the mean of square of instantaneous values of current in in half or complete cycle is:

The Square root of this value is:

Hence, the RMS value of the current is (while putting I = Im Sin θ):

Therefore, We may find that for a symmetrical sinusoidal current:

Mean value of i2 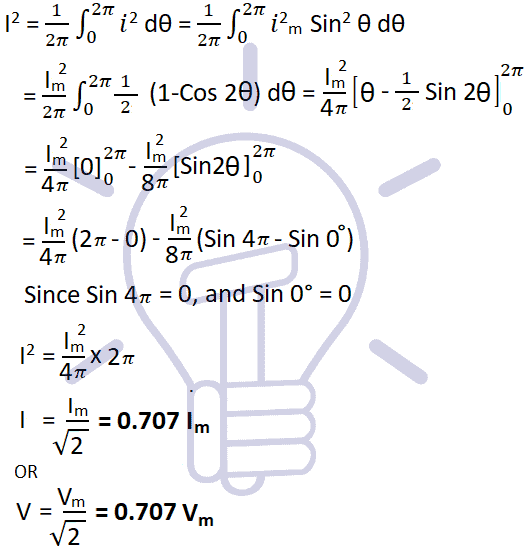 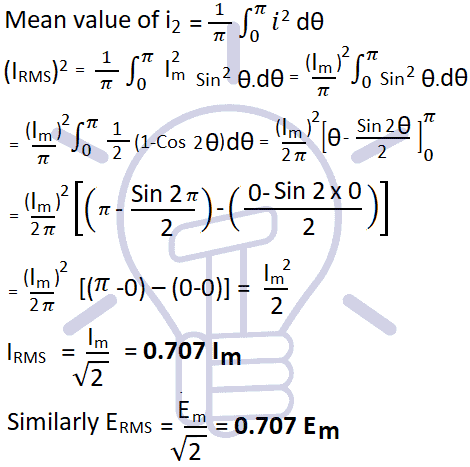 This method is known as mid ordinate or graphical method to find the value of RMS voltages by using mid-ordinates or finding the instantaneous value of AC waveform. For clear understanding, a solved example is given below the explanation.

There are many instantaneous voltages in an AC sine wave and its depends on the time interval. As shown in the fig 3 below where the number of mid ordinates are 12, (The more the mid ordinates, the more accurate will be the result). It shows at instance of t = 1, t = 2, t = 3 …. tn, the instantaneous voltages levels are V1, V2, V3 …. Vn respectively.

First, We will find the instantaneous values of voltages for each each time period like t = 1, t =2 … t = n etc. To find the RMS value, We would have to find the square values of each voltage levels in the AC waveform which shows the square part of the RMS Value.

Now the squired values of voltages are divided by the number of mid-ordinates which shows the mean value of the RMS voltage.

Number of ordinates used in above fig 3 = 12

Assume the peak value voltage (Max Voltage i.e. amplitude = VPK or VMax) is 12V for the alternating waveform. The waveform is divided in 12 mid-ordinates as shown below:

This way, The Value of RMS Voltage is 6.97V by using the graphical or mid-ordinate method to find the RMS value of voltage.

RMS Values of Current and Voltage related to Peak Value or Max Value (Both are same).

RMS Values of Current and Voltage related to Peak to Peak Value.

RMS Values of Current and Voltage related to Average Value.

Here all in one picture. 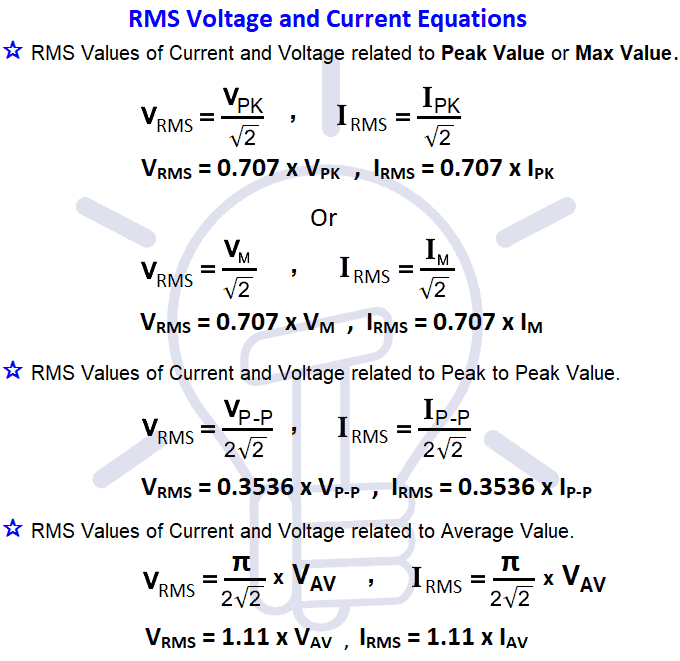 In the below table, the RMS Voltage Value formulas are shown for different kind of sinusoidal wave forms.

In the RMS Voltage Value Calculator, You can calculate the value of RMS voltage from different related values like Average Value, Peak Value and Peak to Peak Value.

What is Average Value

If the maximum value of alternating current is “IMAX“, then the value of converted DC current through rectifier would be “0.637 IM” which is known as average value of the AC Sine wave (IAV).

Keep in mind that the average or mean value of a full sinusoidal wave is “Zero” the value of current in first half (Positive) is equal to the the next half cycle (Negative) in the opposite direction. In other words, There are same amount of current in the positive and negative half cycles which flows in the opposite direction, so the average value for a complete sine wave would be “0”. That’s the reason that’s why we don’t use average value for plating and battery charging. If an AC wave is converted into DC through a rectifier, It can be used for electrochemical  works.

In this method, the half cycle of a sin wave is divided in equal number of time periods where the duration of each time period is “t/n”.

Now, all the average values are added and divided by the number mid-ordinates (i.e. time periods) which shows the overall average of half cycle of a sine wave. the formula for average value is shown below:

Assume the peak value of current(Max Current i.e. amplitude = IPK or IMax) is 12A for the alternating waveform. The waveform is divided in 12 mid-ordinates as shown below:

We know that the standard equation of alternating current is

(a) Average value of complete cycle:

Thus, the average value of a sinusoidal wave over a complete cycle is zero.

(b) Average value of current over a half cycle 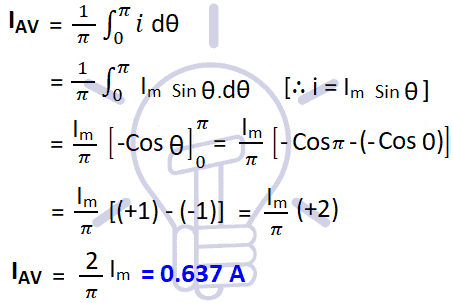 Average Value of Current (Half Cycle)

Similarly, the average value of voltage over a half cycle 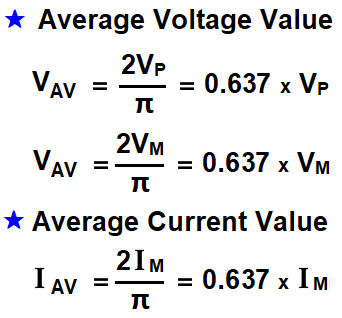 Its mean the value of average voltage or current is equal to multiplication of max or peak value of voltage and current respectively with the constant 0.637.

For example, if the max value or peak value of the sinusoidal wave is 360VPK or 360VMax, by using the above equation, the average value of the voltage would be:

In the below table, the Average Value and  RMS Voltage Value formulas are shown for different kind of sinusoidal wave forms.

What is Instantaneous Value

The value attained by an alternating quantity at any instant is known as instantaneous value. It is denoted by “i” and e.

in other words, the value of an alternating current or voltage at any particular moment us called an instantaneous value.

What is Peak Voltage or Maximum Voltage Value ?

Peak value is also known as Maximum Value, Crest Value or Amplitude. It is the maximum value of alternating current or voltage from the “0” position no matter positive or negative half cycle in a sinusoidal wave as shown in fig 8. Its expressed as IM and EM or VP and IM.

Equations of Peak Voltage Value are:

In other words, It is the value of voltage or current at the positive or the negative maximum (peaks) with respect to zero. In simple words, it is the instantaneous value with maximum intensity.

The sum of positive and negative peak values is known as peak to peak value. Its expressed as IPP or VPP.

Equations and formulas for Peak to Peak Voltage are as follow:

In other words, the peak to peak value of a sine wave, is the voltage or current from positive peak to the negative peak and its value is double as compared to peak value or maximum value as shown in fig 8 above.

What is Peak Factor

It is the ratio between maximum value and RMS value of an alternating wave.

For a sinusoidal alternating voltage:

For a sinusoidal alternating current:

What is Form Factor

The ratio between RMS value and Average value of an alternating quantity (Current or Voltage) is known as Form Factor.

In the below table, the form factor formulas and values are shown for different kind of sinusoidal wave forms.

The path traced by a quantity (such as voltage or current) plotted as a function of some variable (such as time, degree, radians, temperature etc.) is called waveform.

The time taken by a alternating quantity (such as current or voltage) to complete one cycle is called its time period “T”.

It is inversely proportional to the Frequency “f” and denoted by “T” where the unit of time period is second.

Frequency is the number if cycles passed through per second. It is denoted by “f” and has the unit cycle per second i.e. Hz (Herts).

The number of completed cycles in 1 second is called frequency.

It is the number of cycles of alternating quantity per second in hertz.

The maximum value, positive or negative, of an alternating quantity such as voltage or current is known as its amplitude. Its denoted by VP, IP or EMAX and IMAX.

One half cycle of a sine wave (Negative or Positive) is known as alternation which span is 180° degree.

Why Don't Birds and Squirrels Get Electrocuted on Power Lines?