Electricity is one of the basic necessities in these modern times & we cannot imagine our life without it. In either form such as a stored DC in batteries or the AC mains from the utility poles, in both cases, we use it to power our daily life equipment & our industries utilizes it to run machines to manufacture goods & offer services. The amount of electricity we use is measured on the basis of electrical power.

What is Electrical Power?

Every electrical equipment or device that we use has specific power ratings mentioned on it. It means it consume that specific rated power & converts that electrical power to good use. Such as a cellphone, utilizes the power from the battery, to power its display unit (converting it into light), speakers (for audio generation) & its processors (for logical operations) etc. Same as machines that consumes electrical power & generates mechanical power & heater generates heat energy.

The electrical energy is the energy stored in charge Q under the influence of voltage V (potential difference). Hence the electrical power is;

Where Q / t = I, because the flow of charge per unit time is called electrical current denoted by I.

In an electrical circuit, we can say that the power consumed or generated by a component is equal to the product of the voltage drop across it & the current flowing through it. 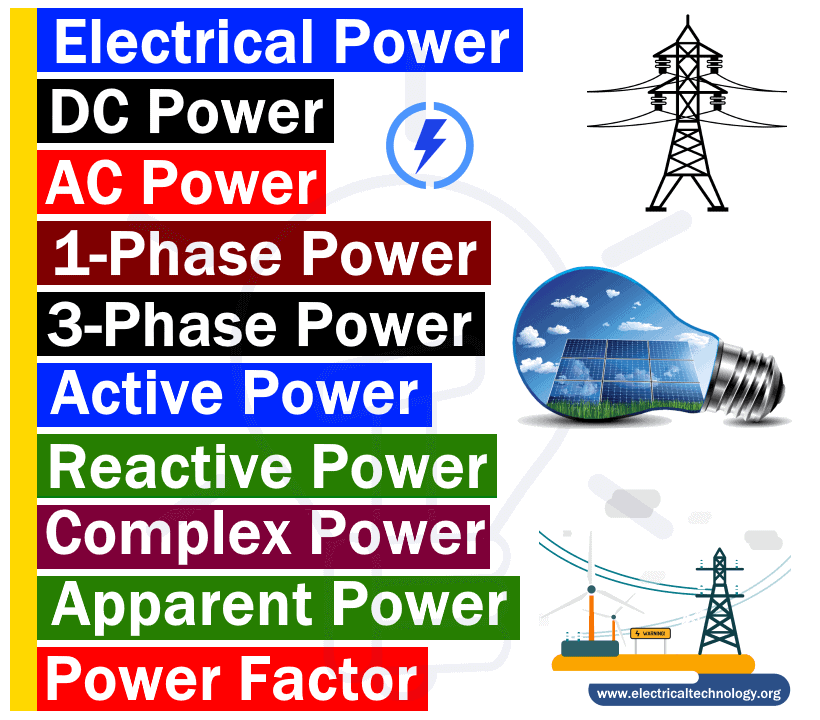 Since the electrical power is flow of energy per unit time & the unit of energy is joule.

The SI unit of electrical power is watt represented by W.

One Watt is defined as, the electrical power consumed, when one volt of potential difference is applied to a circuit & it forces one ampere of current to flow through it.

The power can range from small figures to very large figure that is simplified using prefixes such as mill watt mW, Kilowatt kW, megawatt MW etc.

The electrical power generated or consumed by a component in a circuit can be easily calculated by using these equations;

According to Ohm’s Law; V = IR

Where the current, I is the current flowing through the component, V is the voltage across it & R is the resistance of the component. We can use either equation to calculate power if we have either of the two electrical parameters (I, V or R) of a component.

Assuming a component having resistance R = 10Ω, having voltage V = 12v across it & the current I = 1.2 Amps is flowing through it.

The producer is an electrical unit that generates or supply electrical power to the circuit. According to law of conservation of energy, energy can neither be created nor destroyed. The Producers converts other form of energy into electrical energy such as batteries that converts chemical energy from the chemicals inside it, Water turbines converts the water’s kinetic energy, Wind turbine converts wind energy, solar panels converts solar radiations. All these units are producers of electrical energy & offers power in different environments & conditions.

The electric power is the measurement of how fast the electrical producer supply electrical energy & the consumers consumes it.

Therefore, the types of electrical power are DC power & AC power explained below.

The DC power is supplied by a DC source such as a battery & photovoltaic cell. The direct current is unidirectional & constant. Therefore its calculation is very simple. It is equal to the product of voltage & current.

Where, V is the voltage across component & I is the current passing through it

The Alternating current is a continuously changing current between is maximum & minimum peak values. The power supplied by such current is called AC electrical Power. The Current changes its direction periodically which introduces the idea of frequency & phase in the current & voltage waveform.

Therefore, the AC Power is further categorized in three types of powers.

this is the total power supplied by the source to the circuit. As it name suggest, this is the power that appears to be dissipated inside the circuit. It is denoted by S, & it is given by;

The apparent Power is the combination of Active Power & Reactive Power which is why it is measure in Volt-Ampere or VA. 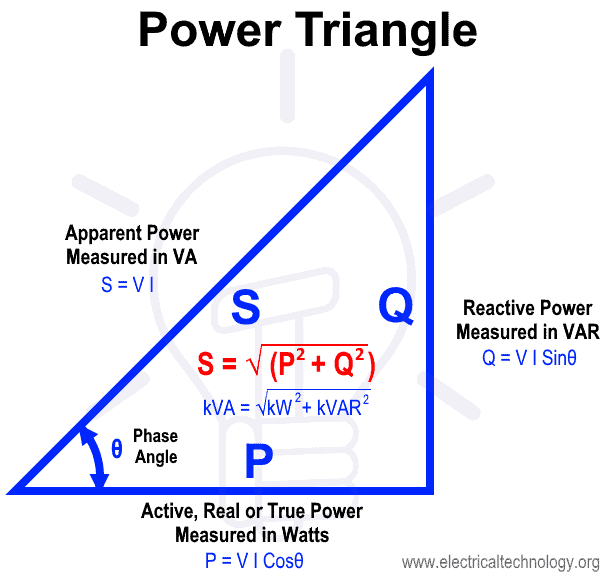 The active power or real power is the amount of power dissipated inside the total resistance of the circuit. This is the power that is actually by the circuit. It is denoted by P & it is given by;

It is measured in Watts.

The reactive power is the power that is dissipated in reactance of the circuit. It is wasted inside the wiring of the circuits in the form of heat & never put to good use. It is denoted by Q & it is given by;

Since this power is wasted & is not used by circuit, it is meant to be reduced to full extent to utilize the full power of the source. It is measured in Volts-Ampere-Reactive or shortly known as VAR.

Since the apparent power is the combination of active & reactive power, they are related to each other. The relation can be explained using the following equation;

If the phase angel or the phase difference between current & Voltage ϕ is given, then we can also calculated active & reactive power using;

The ratio between of the active or real power (the power that is actually dissipated in the circuit) to the apparent power (the total power supplied to the circuit) is known as Power Factor.

Thus the Power factor is the cos ϕ where ϕ is the phase difference between voltage & current due to reactance. It ranges between 0 & 1.

If the Power Factor is maximum 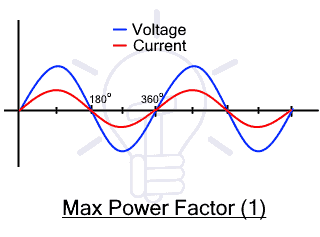 It means the phase difference ϕ = 0° i.e. the voltage & current are in-phase. It is only possible if the total reactance of the circuit is zero. In such case the real power P is equal to the apparent power S i.e. the whole power supplied to the circuit is utilized by it. According to the relation;

It is the best case scenario & the power factor is maintained to be as near as possible to 1.

If the Power Factor is minimum 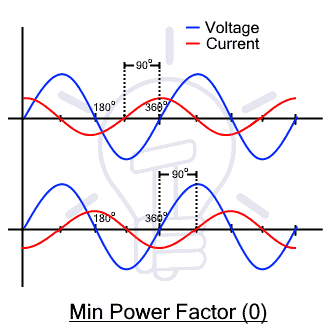 It means the phase difference ϕ = 90° i.e. the voltage & current waveforms are 90° apart. The circuit has pure reactance & there is no resistance in it. Therefore, the total power supplied to the circuit will be wasted inside the wiring & never put to good use. In such case, the active power or the power that actually utilizes is zero & it is calculated by the relation,

Therefore, low power factor is avoided in any condition as it can reduce the efficiency of the system & waste the energy.

How to Wire Solar Panel to 12V DC Load and Battery?