An English physicist James Prescott Joule discovered the Joules’ law (also known as Joel’s effect, Joule-Lenz law or Joule’s first law) in 1840-43 which shows the relation between current, heat and resistance in a specific time i.e. when a current flows through a material, it produces heat in it.

Joule’s Law states that “If “I” amperes current flows through a resistor “R” for “t” seconds, then the amount of work done (conversion of electrical energy into heat energy) is equals to

The work done is the amount of heat energy converted from electricity which dissipates in the air. In this case, the produced amount of heat can be calculated using the following formulas and equations.

A one kilocalorie (kcal) is the amount of heat needed to rise the temperature of one kilogram (kg) water by one degree centigrade (1°C). 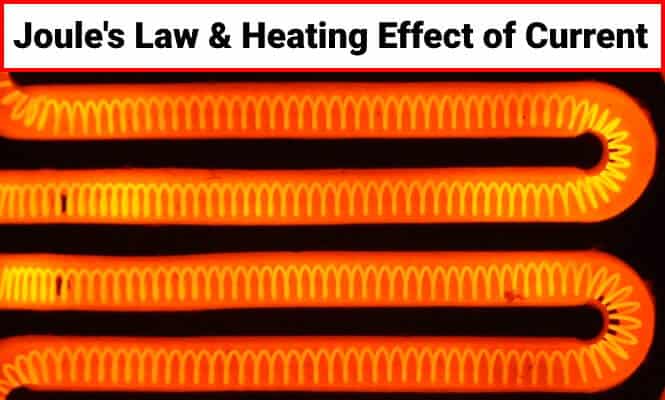 The generated heat by electric current depends on the amount of current and material of that substance. For example,

Electric current produces more heat in insulators (those materials which heavily oppose the flow of current in it e.g. tungsten, nichrome) while the amount of heat generated by flowing current in conductors (those material in which current flows very easily due to less or almost negligible resistance e.g. gold, copper, aluminum)  is less than that of insulators).

Why does the element of the heater glow due to heat but not the heater’s cord?

On the other hand, the cord wire connected to the heater is made of conductor where current easily flows through it without a noticeable resistance. That’s why only the heater element glows, but not the heater’s cable.

Solved Example on Joule’s Law of Heating Effect of Current

An electric heater contains 1.6kg of water at 20°C. It takes 12 minutes to rise the temperature to 100°C. Assume the losses due to radiation and heating the kettle to be 10kg-calories. Find the power rating of the heater.

Applications of Joule’s Effect or Heating Effect of Current

Besides these useful applications of heating effect of current, there are some drawbacks as well such as electric power loss (I2R) in the HVAC (high voltage alternating current) power and transmission lines due to the fact that there is some resistance of the power lines material. Moreover, it leads to serious heating problem in electrical machines and devices such as transformer, generator and motors etc.

Additionally, The thermal efficiency or heating efficiency of current can’t be used at all because there are some heating losses due to the radiation (transfer of the heat in the form of heating waves) and convection (the molecular movement in the material used to transfer the heat).

Why Does the Heating Element Glow but Not the Cord of Heater?