A digital binary counter is a device used for counting binary numbers. Digital counters mainly use flip-flops and some combinational circuits for special features.

What is Asynchronous Counter or Ripple Counter?

The counter in which external clock is only given to the first Flip-flop & the succeeding Flip-flops are clocked by the output of the preceding flip-flop is called asynchronous counter or ripple counter. The name ripple counter is because the clock signal ripples its way from the first stage of Flip-flops to the last stage.

There are two types of counters.

Ripple up-counter starts counting from 0 and counts up to its maximum range. Its range depends on the number of flip-flop being used.

Ripple up-counter can be made using T-Flip flop and D-Flip flop.Designing of counters using flip-flops differs from each other with the type of flip-flop being used.

Consider a 3-bit counter with Q0, Q1, Q2 as the output of Flip-flops FF0, FF1, FF2 respectively. The state table for the 3-bit counter is given below: 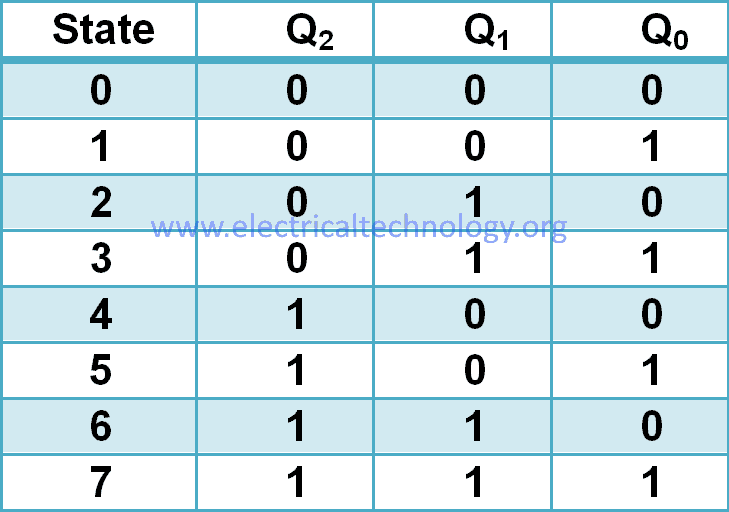 T-Flip flop toggles its state when its input T = 1. In Ripple counter using T-flip flop, input to all stages (flip-flop) is T = 1. The only thing which is not common in these stages is the clock signal. It means that the flip-flop will only toggle when the clock pulse hits the flip-flop. So the clock signal of the succeeding T-Flip flops has to be managed in such way that the Flip-flop toggles when they are supposed to.

Suppose positive edge sensitive T-flip flop is being used in the design.According to the state table of up-counter,

Q0 is toggling continuously so the external clock will be fed to the flip-flop FF0. It will toggle the Q0 upon the positive edge of the clock signal.

Q2 toggles when Q1 goes from 1 to 0 (negative edge).  This can also be used as a clock signal for FF2.Since we are using positive edge sensitive flip-flops, we need the complemented Q1 as the clock input for FF2

Schematic of ripple Up-counter using T-flip flop is given in the figure below.

D-flop flop can be set to toggle its state upon the clock edge if its complemented output is feedback to its input. In such setup, D-flip flop can act as a T-flip flop with input T = 1.

Since the D-flip flop can be set to act as a T-flip flop, we can use the same design of T-flip flop up counter by replacing T-flip flop with D-flip flop. The input of each individual D-flip flop will be connected its complemented output D = Q̅. Whenever the clock edge hits the flip-flop will toggle its state.

The schematic of Ripple up-counter using D-flip flop is given in the figure below:

This counter counts down numbers from highest possible count to 0 and then resets back from the highest count.

Assume 3 bit down counter with Q0 Q1 Q­2 as outputs of flip-flops FF0 FF1 FF2 respectively. The state table of down-counter is given below:

Designing of Down-counter is the same as up counter. The only difference is the toggling of the flip-flop. Each flip-flop toggles when its preceding flip-flop’s output goes from 0 to 1. It is opposite of the up-counter.

The schematic for Down-counter using T-flip flop is given below.

The output of each flip-flop will be fed as a clock input to the succeeding D-flip flops. This will enable the counter to count backward.

The schematic design for ripple down-counter using D-flip flop is given below:

The difference between the up-counter and down-counter is the clock signal. So we will use 2_1 Mux to select the 2 clock signals.

Schematic of ripple Up/Down counter is given below: 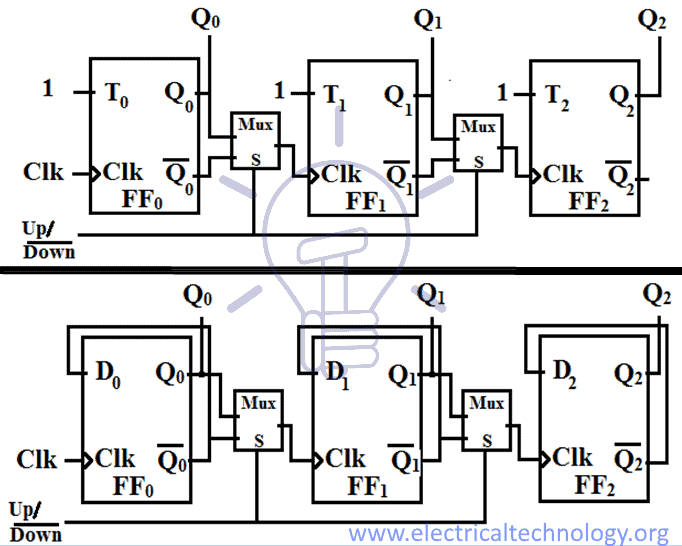 Ripple BCD counter is same as Ripple Up-counter, the only difference is when BCD counter reached to count 10 it resets its flip-flops.

Consider Q0, Q1, Q2, Q3as 4 bits of the counter than the state table for Ripple BCD counter will be. 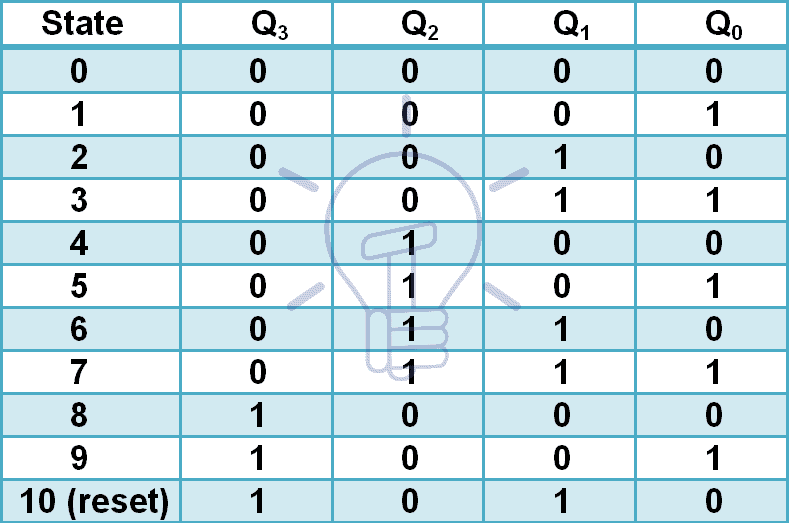 According to the state table, it is a simple up counter except state 10 as reset state condition.

So we will use NAND gate to clear the flip-flop when it reaches to count 10.

Ripple BCD counter can be made using T-flip flops or D-flip flops.

We will use the reset condition for the up-counter T-flip flop to make it BCD counter. It schematic is shown in the figure given below:

Schematic for Ripple BCD counter using D-flip flop is given below: