What is Electronic Counter and Types of Counters

A Counter is a digital logic device in computing to store and display the specific event continuously according to the configuration & programming. Sequential digital logic circuit is a common type of counter consist of single input line (Clock) and number of output lines.

The value of output lines denote a number in binary number system (BCD = Binary coded decimal).  Mostly, the cascade connection of flip-flop are used in these digital circuits. These instruments and devises widley used in digital circuits as a separate ICs as well as combined as parts in larger integrated circuits and PCBs. 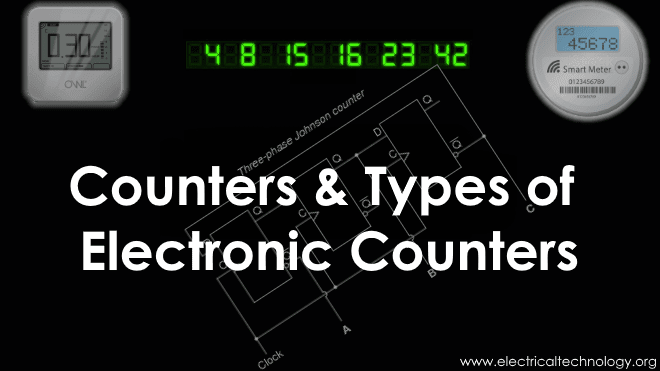 What is Electronic Counter?

Classification of Electronic Counters Based on Clock Input

It consists of parallel arrangement of flip-flops wherein all the flip-flops are clocked simultaneously and in synchronization with the clock pulses. This is the reason propagation delay is independent of the number of flip-flops in the Synchronous counters.

These counters are equipped with combinational logic circuit as well, to ensure each flip-flop toggles at the right time. In synchronous counters, output of one flip-flop is given to input of another flip-flop.

Since the clock information ripples through the counter, it is known as a Ripple Counter. Also since the flip-flops do not change state in synchronization with the input clock, these counters are also known as Asynchronous counters.

Since the final output would depend upon the propagation delay of each counters, there is a limit to the clock frequency, which is given as:

Classification of Electronic Counters Based on Uses 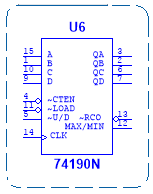 As the name suggests, these counters count in both ascending and descending order, i.e. in forward as well as reverse direction. While some counter ICs have separate clock input terminals for up and down counting (Example IC 74192 and IC 74192), some have only one clock input terminal and a control pin to select the required functioning (Examples: IC 74190, IC 74191). 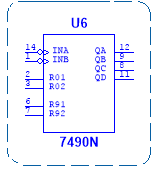 A decade counter or a Module-10 counter goes through 10 unique output combination states until it resets. It consists of 4 flip-flops and requires additional circuitry to skip few states, toconvert the normal counter to a decade counter. It can count 16 possible states, out of which only 10 are used. Examples are 4017B, 7490N.

It is a special type of decade counter whose output is in accordance with the 8421 code.  The counter states are the binary equivalent of decimal numbers. Example is 74LS90.

These are counters which can be pre-set to any initial count, with the help of the PRESET and CLEAR pins of the Flip-Flops. The flip-flops can be clocked asynchronously or synchronously. Presettable counters can be UP counters, DOWN counters or UP/DOWN counters.

These consist of additional input/output pins such as ‘Preset’ (To load any desired count), Parallel Load (PL) inputs (allows PRESET inputs to be loaded to the outputs), and Terminal Count (TC) outputs (becomes active when terminal count is reached.). Examples are IC74190, IC4191 and IC74193. 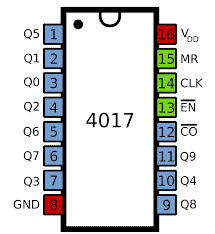 Functions of the IN/OUT PINS Of Counter IC 4017

Given below is the functionality of each of its pins.

Pins 1 to 7, 9 to 11: These are output pins of the IC, with each pin going high with corresponding decimal count. The status is as given below.

Pin 8: It is the ground pin, which is connected to LOW level voltage or to the ground.

Pin 12: This pin is used for connecting with another Counter IC, to support larger counting order. Though we can achieve counts to 20 or more, by cascading multiple IC4017s together, it is advised not to cascade more than 3 ICs, in order to avoid occurrence glitches.

Pin 13: This is an Active LOW pin and is termed as the Disable pin. Once given a logic HIGH signal, it will disable the whole function of the IC, irrespective of the clock pulses.

Pin 14: This is the clock input pin. The input clock pulses are given to this pin and the count advances on rising or positive edge of the pulse.

Pin 15: This is the Active LOW reset pin, which once given a ‘HIGH’ logic signal would reset the IC.

Pin 16: This is the Power Supply pin which should be given a voltage from 3 Volts to 15 Volts.

Electronic counters are used in many digital electronic devices especially in digital clock and multiplexing. Most of their applications are listed below.

This is a brief overview about different types of counters. Any other information regarding counters are welcome in the below section.

you may also read: