What is Ring Counter & Johnson Counter?

There are two types of the Ring counter.

Consider QA, QB, QC, QD as the 4 bits of the ring counter. The truth table for 4-bit ring counter is given below.

In ring counter, logic ‘1’ flows through all stages of the counter. In each state, it flows one bit to the right. When it reaches stage 4, it circulates back to stage1 of the counter.

Ring counter’s state needs to be set before the operation. Since ring counter circulates 1 through all stages, and there are no external inputs except the clock signal. So we need to set its state to initial state 1000 manually. We need to set the first stage flip-flop and clear the rest of the stages to obtain the state 1000.The preset input pin is designed to do this function. The schematic of ring counter is given below:

First, we need to set the initial state 1000 through preset input.

Whenever the first clock edge hits the counter the outputs of each stage shifts to the next succeeding stage. And the output of the last will shift to the first stage making the state 0100.

Now upon next clock cycle, ‘1’ from the last stage (flip-flop) will shift back to the first stage making the initial state 1000. And it starts again from the first state repeating itself considering the clock signal is provided. This is how the data inside the ring counter circulates in the ring.

What is Johnson Counter

The Mod of Johnson counter is ‘2n’, n is the bit size of the counter. Mod is the maximum number of states a counter can obtain. 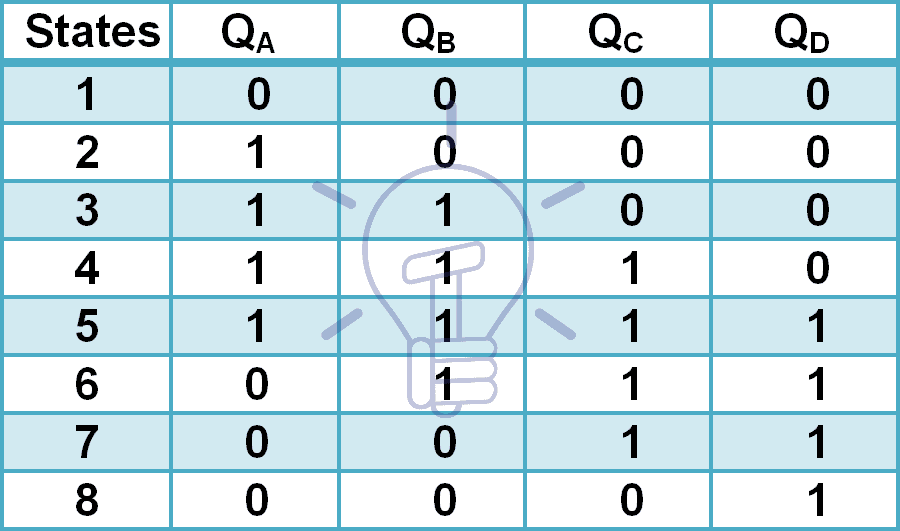 The default state of Johnson counter is 0000 thus before starting the clock input we need to clear the counter using clear input.

Whenever a clock edge hits the counter the output of each flip-flop will transfer to the next stage (flip-flop) but the inverted output of the last flip-flop will shift to the first stage making the state 1000.

Upon next clock cycle, another ‘1’ will stack in from the left side as the inverted output of the last stage will be shifted to the first stage.

On next clock cycle, another ‘1’ will add in from left until the state becomes 1111.

The next coming clock cycles will stack in 0’s from the left making the states 0011, 0001 & 0000 with each clock cycle. Eventually, it reaches its default state and it starts from the beginning again.

Johnson counter divides a clock signal’s frequency by ‘2n’. n is the bit size of the counter. Johnson counter uses less number of flip-flops compare to a typical ring counter.

3-stage Johnson counter is used as 3-phase square wave generator having 120-degree phase shift between them.

Other applications of Johnson and Ring counters as follow: