How To Test A Relay Using Multimeter & Battery? Its Terminal Identification & Operation

In this article, we will show you “how to test a relay“. A relay usually gets damaged due to a number of reasons. So it is crucial to test a relay if it stopped working before you replace it or throw it away. To test a relay, you need to have a multimeter or an ohmmeter.

Before testing any relay you need to know about the relay itself. 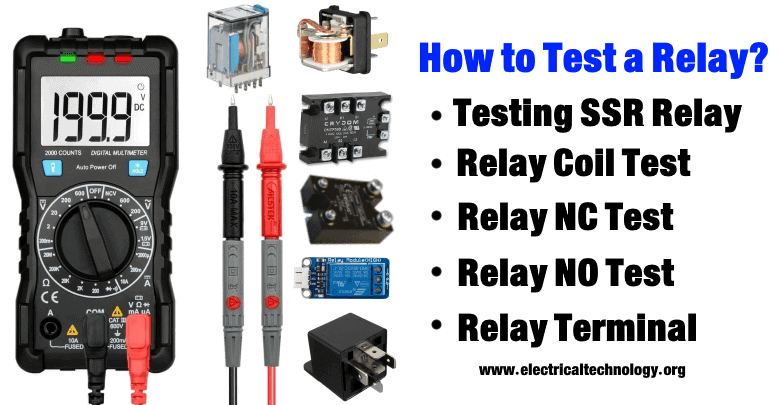 What is a Relay?

A relay is an electromechanical switch. It controls a circuit using a very low current that energizes the coil. The coil generates a magnetic field which attracts a movable lever (pole) to change the switch position. 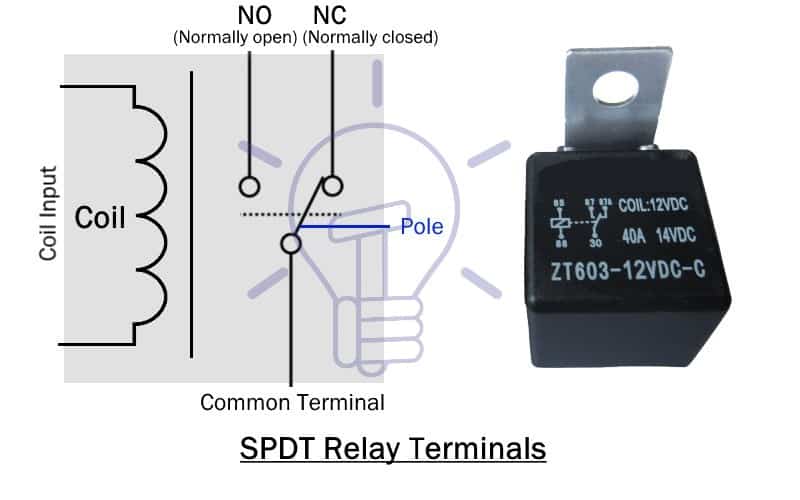 Usually, the terminals are specified on the protective cover of the relay. if there is no information about its terminals then you can identify it using an Ohmmeter. 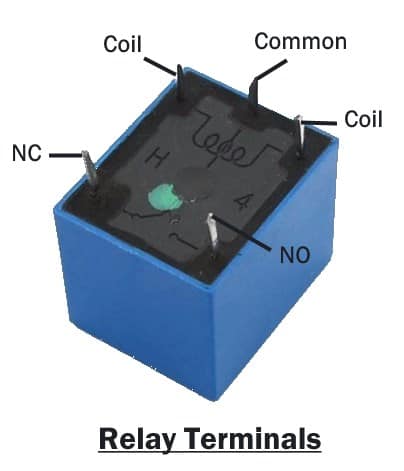 Deactivated mode: When there is no power source connected to the coil input, the current will flow through the Common terminal to NC terminal.

Activated mode: when the coil is energized, the current will only flow from common terminal to NO terminal. 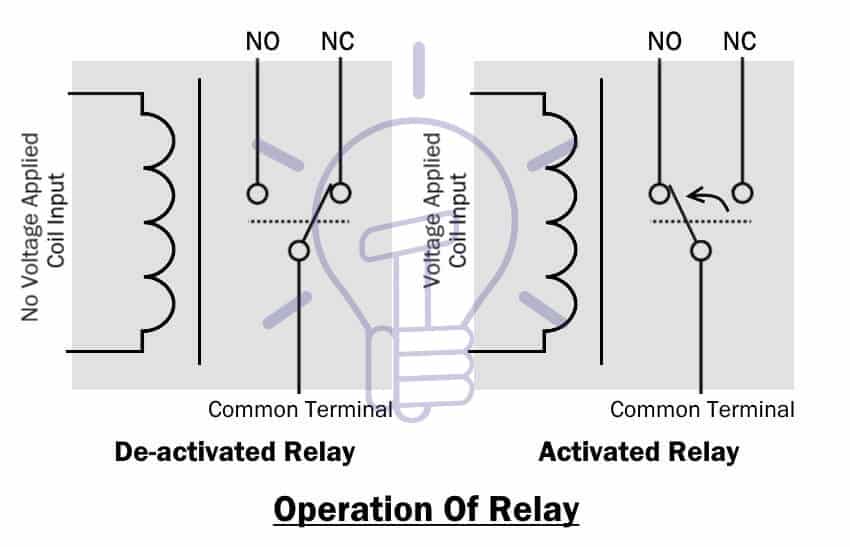 This test is performed to examine the coil condition (open or closed or shorted turns). This problem occurs due to exceeding the input voltage of the coil. The operating input parameter’s min & max limits are specified in its datasheet.

There are two modes in multimeter which can be used to test a relay.

The main purpose of this test is to check the continuity of the coil.

If your meter does not have a continuity function or for some reason does not show any sign of continuity then use the second method.

Unfortunately, if you test a relay using this continuity method it will not reveal any turns of the coil that has been shorted.

If you choose to test a relay using Ohmmeter, you need to do a tad bit of research beforehand. You need to know about the nominal value of the coil resistance from its datasheet. You can find its datasheet online by using the model number usually written on its protective case.

However, most of the time the resistance of the coil lies beneath 400 ohms.

If the measured resistance matches the resistance mentioned in its datasheet, the relay coil is fine.

If the resistance is very low or very high, the coil most likely has short turns or opened respectively. 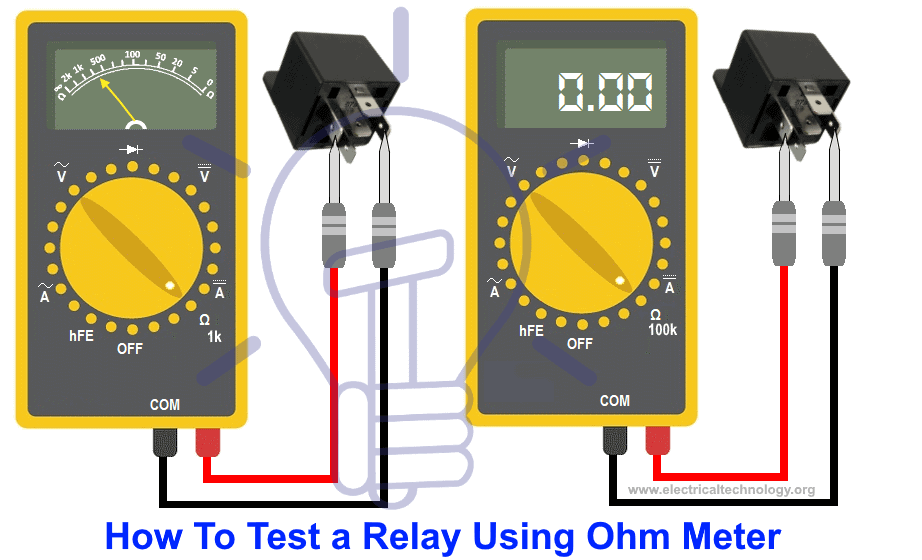 Note: AC coil power relays have high coil resistance (usually higher than 10kohm). So you need to make sure what type of relay you are testing.

Related Post: How to Check a Transistor by Multimeter (DMM+AVO) ? – NPN & PNP

Remember, do not use this method unless you have got the technical skills of using a power source taking the necessary safety precautions.

This relay test provides the necessary information regarding the switching of the relay to ensure that the terminals do connect & disconnect during the coil energizing.

The NC terminal remains closed until the relay activates.

If the meter does not beep at all, it is probably the conductors inside are broken.

You can also check it using an Ohmmeter. A good relay has NC terminal resistance of 0 Ohm when deactivated & infinite resistance when activated.

This test ensures the connectivity between the common terminal & the NO (normally open) terminal.

NO terminal remains open until the relay activates.

If the meter does not show any sign of continuity, the relay conductors are damaged.

Related post: How to find The value of Burnt Resistor ( By three handy Methods )

How to Test a Solid State (SSR) Relay ?

This is the easiest and accurate way to check and troubleshoot an SSR (Solid State Relay). To test a solid state relay, follow figure and steps given below.

The operation is same as above while testing AC Controlled solid State Relay. But you will have to provide AC Control Voltage instead of DC as shown in fig below.

According to the schematic given below, If light bulb ON when you close the switch and “OFF” again by opening the switch. The relay is good as expected otherwise, relay is faulty and you should change with new one. 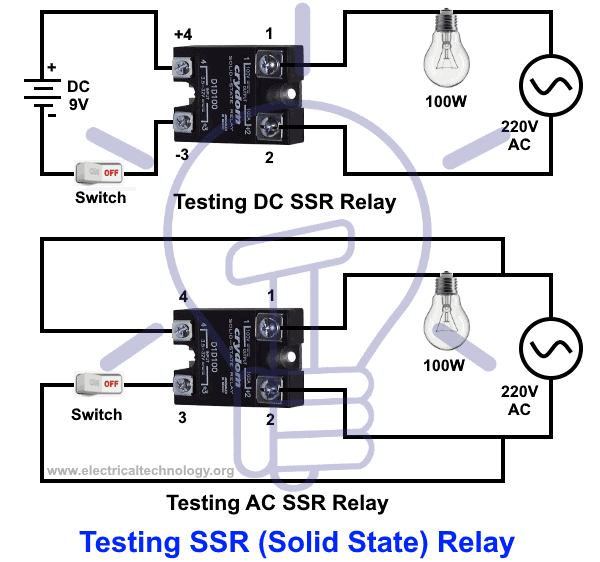 Related Post: How to Find the value of SMD Resistors

To test a solid state relay by using digital multimeter, follow the steps given below:

These are some of the basic & easy methods to test a relay. If you are using another method or know special way to check and troubleshoot a relay, let’s know in the comment box below to share with our audience.

What is Rectifier? Types of Rectifiers and their Operation