The modulation concept comes into consideration when the signal needs to be transmitted over a long distance through an antenna. Antenna helps transmit the signal over long distance. 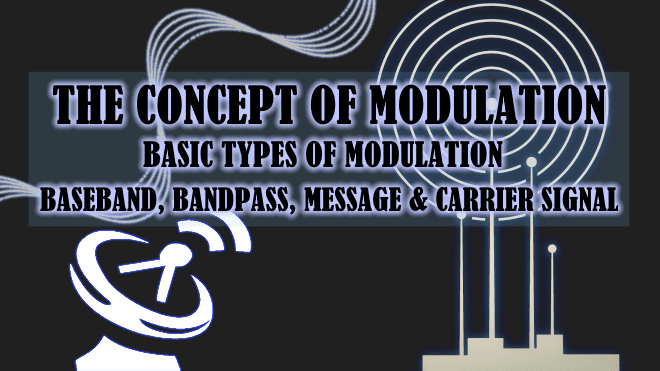 A signal consisting of significantly lower frequency (up to 10 kHz) is known as a baseband signal. Example of the baseband signal is voice, audio and video signal.

All of these signals contain low frequencies (up to 10 kHz), which makes them baseband signals. The baseband signal cannot be transmitted directly through the antenna. Thus it gives rise to the concept of modulation. 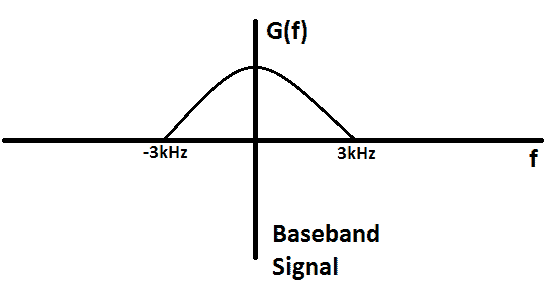 If a signal consists of significantly higher frequencies (Higher than 100 kHz) then it is known as Passband or BandPass signal. Bandpass signal does not contain any frequency lower than 100 kHz.

Bandpass signal can be directly transmitted through the antenna.

The signal that is used in modulating the carrier signal during modulation is called the message signal.

Suppose a baseband message signal m(t) is a rectangle signal with T = 1ms. To show its frequency spectrum, we need to do its Fourier transform.

We know that the Fourier transform of rectangle function is a sinc function but for the sake of understanding, we will just go with the spectrum given below. The spectrum of m(t) signal is given in the figure:

The frequency f of m(t) ranges from 0 to 1Khz, which makes it a baseband signal.

The sinusoidal signal with a much higher frequency that is used in the modulation is called the carrier signal.

As you can see, the spectrum of carrier signal only contains the frequency 300 kHz. This makes it a bandpass signal. It is easily transmitted through the antenna.

The resultant signal acquired after modulation of message and carrier signal is called a modulated signal.

Suppose the product signal p(t) is the modulated signal of m(t) & c(t). It is a sinusoidal signal, where the amplitude of message signal m(t) is not 0. The time domain and frequency domain figures of modulated signals are given below:

The modulated signals frequency is shifted by the frequency of the carrier signal fc. The spectrum shows 2 sides (negative and positive side)of the frequencies, which is nothing but a mirror of each other.

This modulated signal is now a bandpass signal and an antenna can easily transmit it.

Related Post: What is GSM and How does it Work?

The process in which one of the characteristic parameter (amplitude, frequency, phase) of the carrier signal varies linearly with respect to message signal’s amplitude is called modulation.

Basic types of Modulation are defined with figures below.

The message signal’s information is stored in the amplitude (envelope) of the modulated signal. 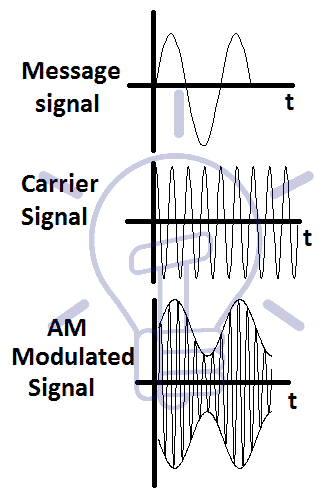 The type of modulation in which the Frequency of the carrier signal varies with respect to the amplitude of the message signal is called Frequency modulation.

The message signal’s information is stored in the frequency of the modulated signal.

The type of modulation in which the phase of the carrier signal varies linearly with respect to the amplitude of the message signal or data signal is called Phase modulation.

The information of the message signal is stored in the phase of the modulated signal. 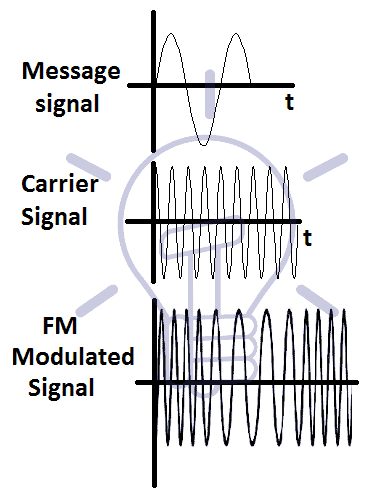