An industrial communication network is a backbone for any automation system architecture as it has been providing a powerful means of data exchange, data controllability, and flexibility to connect various devices. With the use of proprietary digital communication networks in industries over the past decade led to improve end-to-end digital signal accuracy and integrity.

These networks, which can be either LAN (Local Area Network, which is used in a limited area) or WAN (Wide Area Network which is used as global system) enabled to communicate vast amounts of data using a limited number of channels. Industrial networking also led to the implementation of various communication protocols between digital controllers, field devices, various automation related software tools and also to external systems. 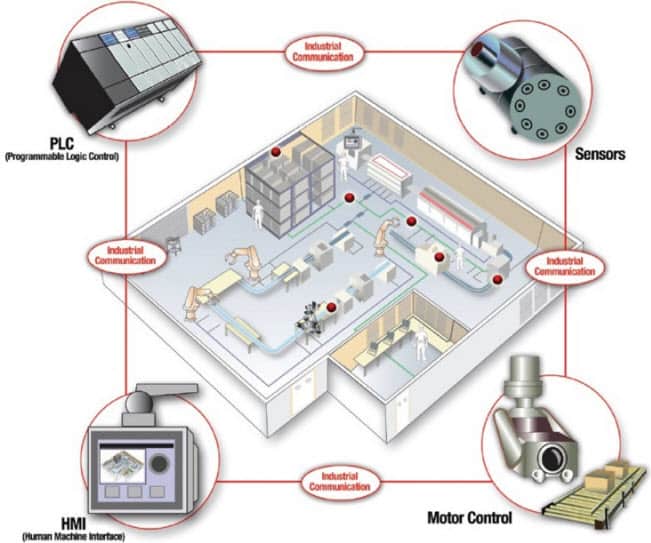 With the advancements in digital technology, fieldbus technology is now ruling the automation field as it provides multidrop communication facility that results cost effective and cable saving communication. The following is an overview of some industrial communication networks that play a significant role in today’s industrial control systems.

What is an Industrial Communication Network?

Data communication refers to the transformation of information or data, mostly in digital format from a transmitter to a receiver through a link (which can be copper wire, coaxial cable, optical fiber, or any other medium) connecting these two.

The examples of industrial communication networks include Ethernet, DeviceNet, Modbus, ControlNet, and so on. 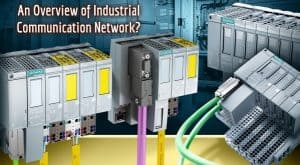 In order to provide an interconnection between these devices and also to enable communication in between them, a powerful and more effective communication network or scheme is needed. They differ quite significantly from traditional enterprise networks. These industrial networks form a communication path among field devices, controllers and PCs.

The transmission media for passing the data and control signals can be either wired or wireless. In case of wired transmission, a cable is used that can be a twisted pair, coaxial cable or fiber optics. Each network cable has its own electrical characteristics that may be less or more suitable to a type of network or specific environment. In case of wireless transmission, communication is performed through radio waves. 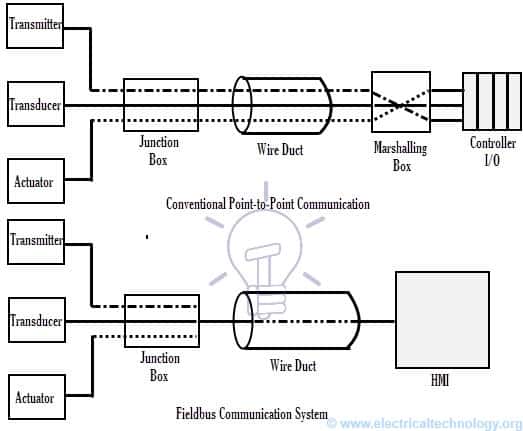 A fieldbus is another local control area network used for real-time distributed control systems in complex automated industrial systems. It is a digital two-way multidrop communication link between controllers and intelligent field devices such as smart sensors/actuators/transducers. It replaces the conventional point-to-point communication system that consists of as many wire pairs as the number of field devices.

In case of fieldbus system two wires are enough for many devices that belong to the same segment. This result, enormous cable saving thereby, cost effective. Profibus and Foundation Field Bus are the two most dominant fieldbus technologies used in process automation field.

Earlier we have discussed the hierarchical arrangement of the automation system depending on their functionality and information flow in Industrial Automation article. In a manufacturing or process industry, the information or data flows from field level to enterprise level (bottom-to-top) and vice-versa. 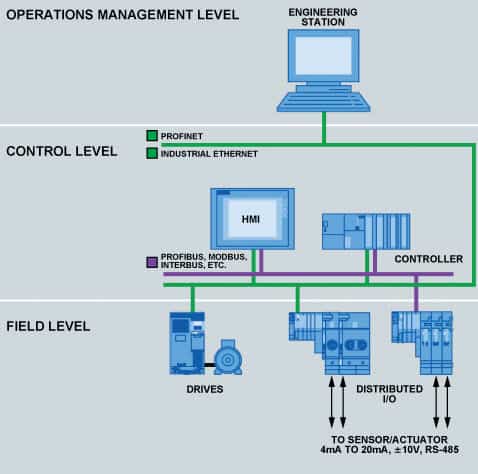 This lowest level consists of field devices such as sensors and actuators of processes and machines. The task of this level is to transfer the information between these devices and technical process elements such as PLCs. The information transfer can be digital, analog or hybrid. The measured values may stay for longer periods or over a short period.

Nowadays, fieldbus technology is the most sophisticated communication network used in field level as it facilitates distributed control among various smart field devices and controller. This is a bidirectional communication system in which many variables are taken care by single transmission. Different types of fieldbuses include HART, ControlNet, DeviceNet, CAN Bus, Profibus, and Foundation Field Bus.

Local Area Networks (LANs) are widely used as communication networks in this level to achieve desired characteristics. The Ethernet with TCP/IP protocol is mostly used as control level network to connect control units with computers. In addition, this network acts as a control bus to coordinate and synchronize between various controller units. Some fieldbuses are also used in this level as control buses such as Profibus and ControlNet.

This is the top level of the industrial automation system which gathers the information from its lower level i.e., control level. It deals with large volumes of data that are neither in constant use or time critical. Large scale networks are exists in this level. So Ethernet WANs are commonly used as information level networks for factory planning and management information exchange.  Sometimes these networks may connect to other industrial networks via gateways.

Serial communication interfaces are either built into the CPU or process module (consider, for a Programmable Logic Controller) or it can be a separate communication module. These RS interfaces are mainly used to transfer the data reasonably at high data rate between a PLC and the remote device. Barcode readers, operator terminals and vision systems are the examples of these interfaces. 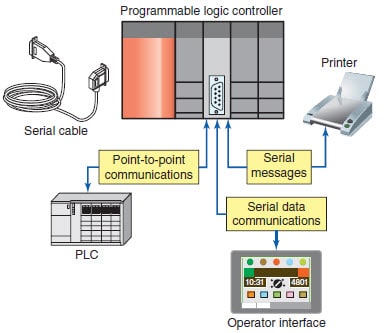 It is an acronym for Highway Addressable Remote Transducer. It is an open process control network protocol that superimposes digital communication signal on the top of 4-20mA signals using the Bell 202 Frequency Shift Keying (FSK) technique.

It is the only communication network that facilitates both analog and bidirectional digital communication at the same time by the same wiring, and hence these networks are also called as hybrid networks. This digital signal is called as HART signal which carries diagnostic information, device configuration, calibration and other additional process measurements. 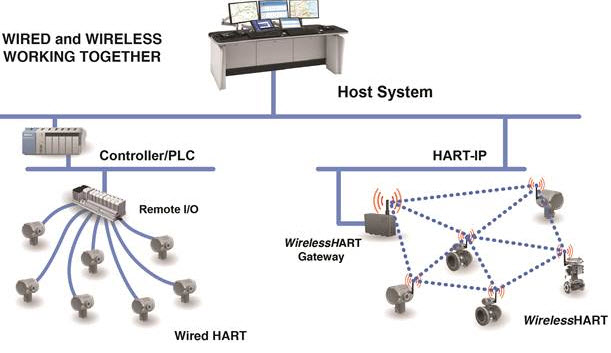 It is an open-device level network based on CAN technology. It is designed to interface field level devices (such as sensors, switches, barcode readers, panel displays, etc.) with higher level controller (such as a PLC) with a unique adoption of basic CAN protocol. It can support up to 64 nodes and supporting up to 2048 total devices.

It reduces the network cost by integrating all devices on a four-wire cable that carries both data and power conductors. The power on the network allows the devices to be powered up directly from the network and hence it reduces the physical connection points. This network is popularly used in automotive and semiconductor industries.

It is an open control network, which uses Common Industrial Protocol (CIP) in order to combine the functionality of peer-to-peer network and an I/O network by providing high speed performance. This network is the combination of Data Highway Plus (DH+) and remote I/O. It is used for real-time data transfer of time-critical as well as non time-critical data between I/Os or processors on the same network.

It can communicate up to a maximum of 99 nodes with a data transfer rate of five million bits per second.  It was designed to be used on both device and field level of industrial automation system. It provides media and communication redundancy at all the nodes of the network.

It is an open system protocol that can run on a variety of physical layers. It is the most widely used protocol in industrial control applications. It is a serial communication technique which provides master/slave relationship to communicate between devices connected on network. It can be implemented on any transmission medium, but most commonly used with RS232 and RS485. 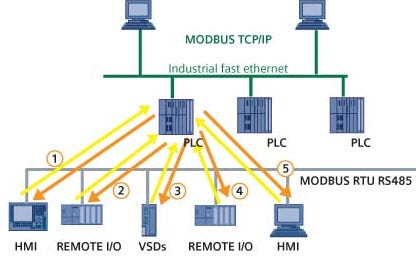 Serial Modbus with RS232 or RS485 (as physical layers) facilitates the connection of Modbus devices to the controller (such as a PLC) in a bus structure. It can communicate between one master and a number of slaves up to 247 with a data transmission rate of 19.2 kbits/s.

A newer version of Modbus TCP/IP uses Ethernet as physical layer that facilitates the data exchange between PLCs in different networks. Irrespective of the type of physical network, it facilitates a method of access and control of one device by another.

It is one of the well known and widely implemented open-field networks. These networks are mainly used in process automation and factory automation fields. It is most suitable for complex communication tasks and time-critical applications. There are three different versions of Profibus namely, Profibus-DP (Decentralized Periphery), Profibus-PA (Process Automation) and Profibus-FMS (Fieldbus Message Specification). 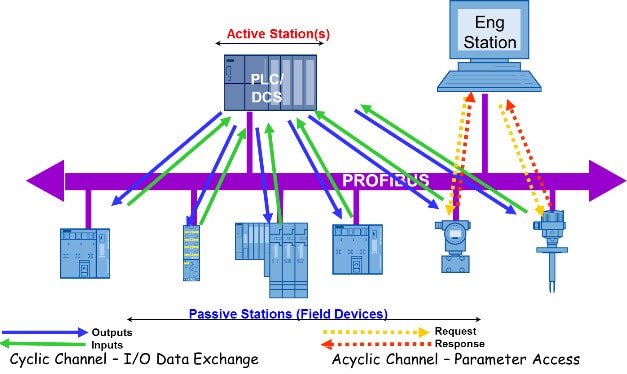 Profibus-PA is specially designed for process automation. Profibus-PA networks are recommended to use in intrinsically safe areas. These networks permit sensors, actuators and controllers to connect to a single common bus, which provides data communication and power over bus. These networks use the Manchester Bus Powered (MBP) physical layer based on international standard IEC 61158-2. 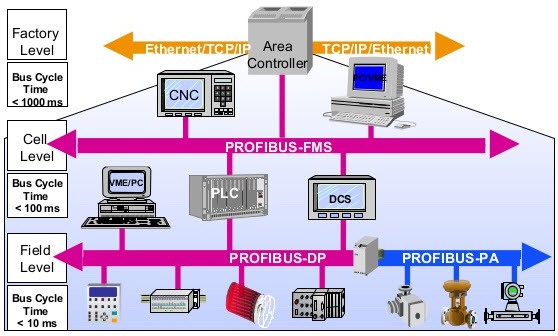 Profibus-FMS is a multimaster or peer-to-peer messaging format which allows master units to communicate with one another. It is a general purpose solution that performs communication tasks in control level, especially in cell sublevel to facilitate communication between Master PCs.

Most commonly FMS and DP are used simultaneously in COMBI mode in situations where a PLC is being used in conjunction with a PC. In such case primary master communicates with secondary master via FMS while DP transfers control data on same network to I/O devices.

It is an open fieldbus standard designed specially to meet the mission-critical demands in intrinsically safe environments. It is a type of LAN for foundation fieldbus compatible instruments and controllers used in manufacturing and process industries. It is a two-way, digital protocol standard defined by intrinsically safe IEC 61158-2 physical layer (for FF H1) and compatible with Ethernet equipment (in case of FF HSE). The three kinds of FF networks include low speed H1, high speed H2 and High Speed Ethernet HSE. 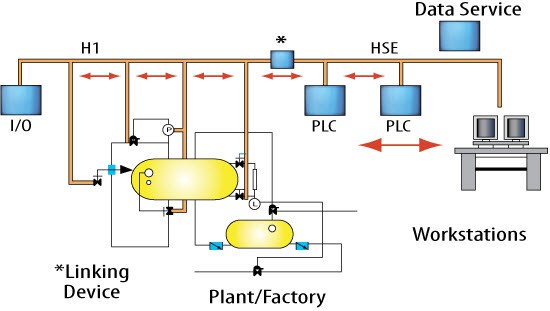 H1 network supports a speed of 31.25 kbps. There are two speeds supported by H2 network, which are 1.0 Mbps and 2.5 Mbps. HSE network supports 10 or 100 Mbps speed as it uses Ethernet protocol.

What is a Stepper Motor? Types, Construction, Operation & Applications

What is Energy Efficient Lighting and Techniques to Implement It