How to Calculate the Numbers of Fans and Proper Size of Ceiling Fan?

Generally, the power wattage of a ceiling fan is 100 watts. For this reason, no more than 6 fans can be connected to the final sub circuit having 5 amperes current rating.

Fans, incandescent lamps and fluorescent and CFL lamps etc can be installed in the same circuit but the total current of appliances should not increase than the rated current of fuse/circuit breaker and cable size used for the wiring installation.

Each fan should be connected and control through separate switch and dimmer or speed regulator (speed controller for variable speed). The minimum height of Speed regulator should 1 ½ meter.

To be on the safe side, the max length between fan and ceiling should be 3 meters (10 feet) and it should not be installed below 2.75 meters (9 feet). Ceiling fan should be installed through hook or clamp and 2 nut bolts of < ½” (12.7mm) can be used to fix the rod in the hook/clamp. 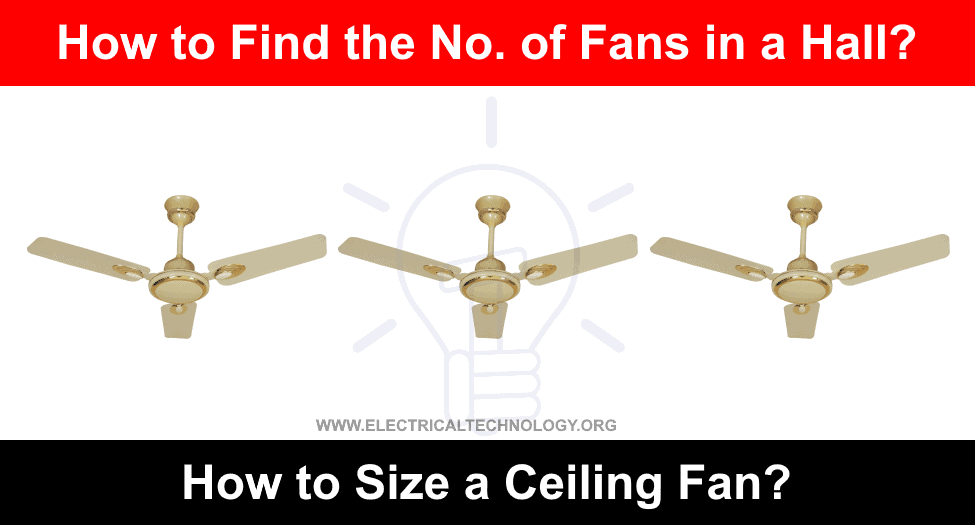 How to Find the Number of Fans?

If the size of a ventilated room is 14′ x 12′, a 48′ fan can be suitable to use then. In case of bigger areas like hall, the number of fans can be found by dividing the total area of the room by the area of a single fan. Let’s see the following solved example. 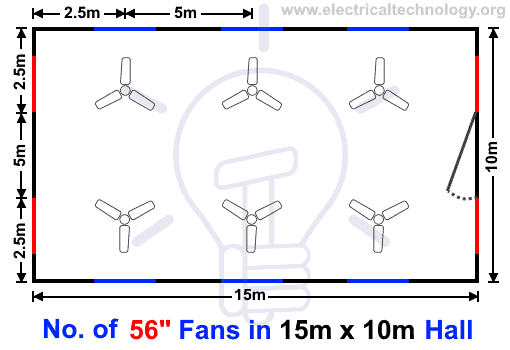 How to Size a Ceiling Fan?

According to the American Lighting Association, the proper size of a ceiling fan can be figured out by the following table 2.

According to the ALA (American Lighting Association), a ceiling fan installation should not be less than 2.1 meter (7 ft) of area between ceiling and floor.

If you are going to put a thick carpet, consider the size as well when measuring the area between ceiling and floor.

If case of tall ceiling, an optional down-rod can be used to connect the fan to reduce the length to floor for an efficient air moving circulation.

Below are the reference chart and tables for sizing a fan and finding the number of of ceiling fans respectively.

How to Calculate the Number of Fluorescent Lamps in a Final Sub Circuit?