What is the Difference between Fuse and Circuit Breaker

A fuse is a device, which is used to protect circuits from over current, overload and make sure the protection of the circuit. It is made of porcelain, glass or porcelain. The fuse link or fuse element is a thing metal strip made up of Copper, Silver, Aluminum, Zinc, or alloys. When overload occurs, the fuse element starts to melt immediately and break the connected circuit from the incoming supply. Thus, it protects the whole circuit. 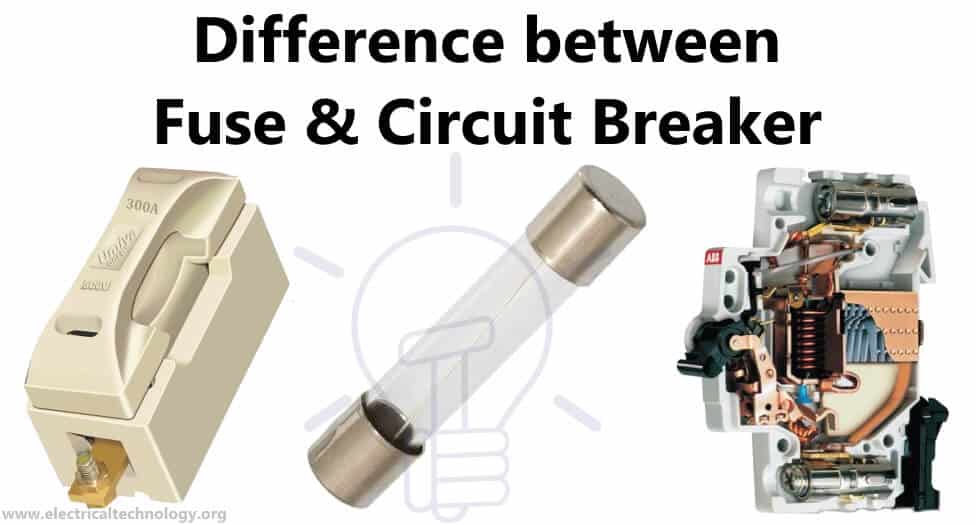 Differences between Circuit Breaker and Fuse

Characteristics of Fuse and Circuit Breaker

Keep in mind that the full load current of the circuit which has to be protected by fuse should not more than the fuse current rating.

Fuse and circuit breaker rating and selection is depends on multiple factors. Keep in mind that the full load current of the circuit which has to be protected by fuse should not more than the fuse current rating.

As a general, we have to use the following formula to select proper fuse rating.

For example, we have to find the circuit breaker of fuse rating in ampere for 10A two pin socket where the load is 1kW and supply voltage is 220V AC (120 V in US).

Advantages of Fuse over Circuit Breaker

Advantages of Circuit Breaker over Fuse

Circuit breaker can be used as over current protective device as well as normal switch where fuse can’t be used as a switch.

Circuit breaker can be reset (like simple ON-OFF switch) after an automatic operation while fuse should be replaced for post-of operation.

One of the major advantages of circuit breaker over fuse is that a circuit breaker can be multiple poles. It can protect multiple lines whereas fuse is a single pole and can be used on single line.

Circuit breaker can be easily check and trace the fault where in fuse, the fault indication won’t be easy to identified as the fuse element is inside the fuse.

At all, as compared to fuse, a circuit breaker responds quicker, reliable in operation, and more sensitive. That’s why a fuse should be replaced with circuit breaker.

Main Difference between Contactor and Starter