Suppose you have three single-phase transformers of 5 KVA each. They are connected in (both primary & secondary sides) in delta, then we can say it is a closed delta system of Transformers.

How much 3Ø balanced load can be supplied by this combination?

The answer is, 15 KVA, three-phase balanced load can be supplied by this combination.

Now, how much 3Ø balanced load can be supplied by this system?

The answer is, now we have two single-phase transformers of 5 KVA each, but we are not able to supply 10 KVA, balanced load.

The efficiency of this (open delta) system will be less as compared to the closed delta system. Because, in open delta system, both the transformers are operating at rated capacity (i.e. 5 KVA), so their losses will be as per full load losses, but the output is reduced (output is 8.66 KVA instead of 10 KVA).

So, we are able to continue three phase supply as an open delta system but at reduced efficiency.

How the value 8.66 KVA is calculated in the above discussion?

It is as follows:

Now, we will explain, aforesaid calculation with the following diagram: 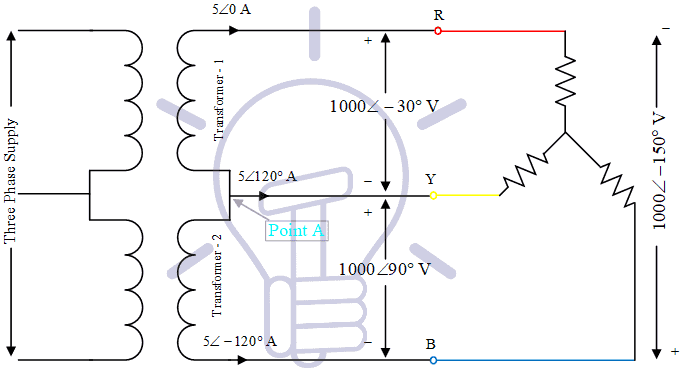 It is the circuit diagram of an open delta system. In this diagram three phase unity PF load (resistive load) is supplied by two transformers. It can be observed that at point ‘A’ KCL is satisfied. Also recall that phase difference between Line current and Line-Line voltage (phase to phase voltage) is 30°, the same is reflected in the diagram also.

If you will calculate load in KW (active power) then you will find that Load on both the transformers will be equal to three phase load (in KW).

From the diagram, the load supplied by transformer-1 is:

Load supplied by transformer-2 is:

(In the calculation of transformer-2, Sign of current is minus (it is -5 instead of 5), readers can understand it themselves)

Dr. Vipin Jain obtained degree of Bachelor of Engineering in 1992 from Nagpur University, Master of Technology in 2007, Ph.D. Degree in 2017 from University of Delhi. He has long teaching and industrial experience. He is a faculty member in the Electrical Engineering Department, Bharat Institute of Technology, Meerut (UP), India, since December 2007. More than twenty research papers have been published by him so far. He is energy auditor certified by Bureau of Energy Efficiency, Government of India.