Being transformers static machines without any moving and turning parts, they are very reliable machines, and if maintained properly, can last for 40 years or more. Also they do not trip or blow when oven-stressed (except under extreme conditions), transformers are frequently overloaded and allowed to operate well beyond its capacity.

However, use and ageing of electrical installations, similar to other installations, is an origin of normal deterioration in electrical equipment that can be accelerated by factors such as a hostile environment, overload, or severe duty cycle.

However, equipment failure is not inevitable if a checking and preventive maintenance program is established.

Establishment of a regular preventive maintenance program may minimize the risk of equipment failure and the resulting problems of that failure, the detection of latent faults and the first step for troubleshooting.

The most frequent attention given to power transformers is visual inspection, which involves mainly checking the transformer’s general exterior condition and cooling system.

Power transformers must be inspected regularly so that problems can be detected early and corrected before major repairs are needed.

Inspections are done routinely, usually once a week, although the frequency can vary from company to company and among transformers. For example, a transformer may be checked more often if there is reason to believe that a problem is developing.

Transformer monitoring refers to on-line measurement techniques, where the emphasis is on collecting pertinent data on transformer integrity and not on interpretation of data.

Transformer monitoring techniques vary with respect to the sensor used, transformer parameters measured, and measurement techniques applied. Since monitoring equipment is usually permanently mounted on a transformer, it must also be reliable and inexpensive.

Winding and On-Load Tap Changers (OLTC) failures dominate; consequently, the focus of most monitoring techniques is to collect data from parameters that can be used to assess the condition of winding and tap changers.

Figure 1 shows the statistics distribution of failures in an oil-immersed transformer. 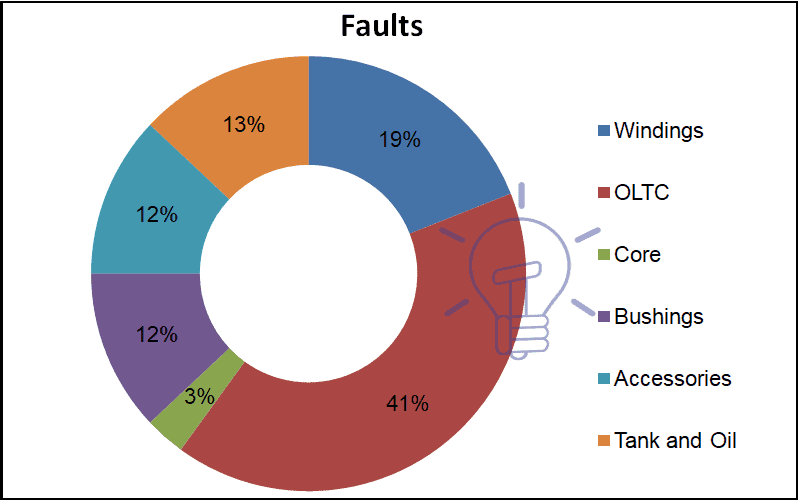 Figure 1 – Statistics distribution of failures in an oil-immersed transformer

Common parameters used to monitor windings and insulation status is PD and dissolved gases in the oil; in what concerns monitoring of OLTC temperature and vibration are used.

Data from monitoring sensors and units are transformed into digital and analogue signals and establish a real-time basis communication with a man-machine interface and data recording.

However, this analysis is typically performed off-post, where sophisticated (and usually expensive), equipment is used to determine gas content.

To reduce the risk of missing incipient faults due to long sampling intervals, monitoring techniques are being developed to provide warnings with respect to changes in gas types and concentrations observed within a transformer. Conventional dissolved gas-in-oil analysis is performed after a warning is issued. Several transformer gases and corresponding sources are listed in Table 2. 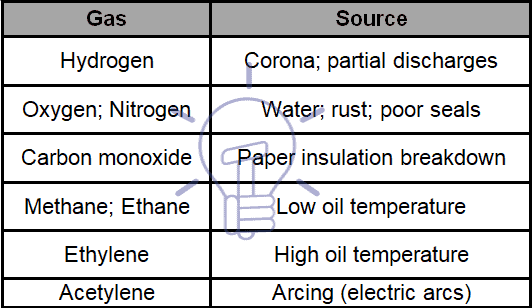 By extracting the gas dissolved in the insulation oil of the main transformer and measuring the amounts of the six gas components at their low level, it is possible to detect local overheating or partial electric discharge in the unit depending on the analyzer data and to prevent any accidents before they occur.

Schedule of Preventive Maintenance Actions and Inspection of Transformer

Frequency of maintenance shall be established taking into account equipment reliability requirements and the manufacturers’ manuals and recommendations.

Maintenance activities may be planned for each segment of the installation at different periods, but major industries usually once or twice a year have a global shut-down for maintenance purposes.

NETA[1] Standard MTS-2007 Appendix B presents the time-based maintenance schedule and matrix shown in Table 3. The application of the matrix is recognized as a guide only.

Specific condition, criticality, and reliability must be determined to correctly apply the matrix. Application of the matrix, along with the culmination of historical testing data and trending, should provide a quality electrical preventive maintenance program.

For transformers the minimum frequency maintenance tests are defined at the same standard and shown in Table 4.

Maintenance activities (visual and mechanical inspection; electrical tests; tests values) for each piece of equipment are defined under NETA Standard ATS-2009 and for transformers can be summarized as shown in Table 5.

Table 5 – Frequency of tests and inspections for transformers’ maintenance actions

The actions of preventive maintenance of transformers may be synthesized as follows:

Table 6 shows usual activities for each type of maintenance actions. 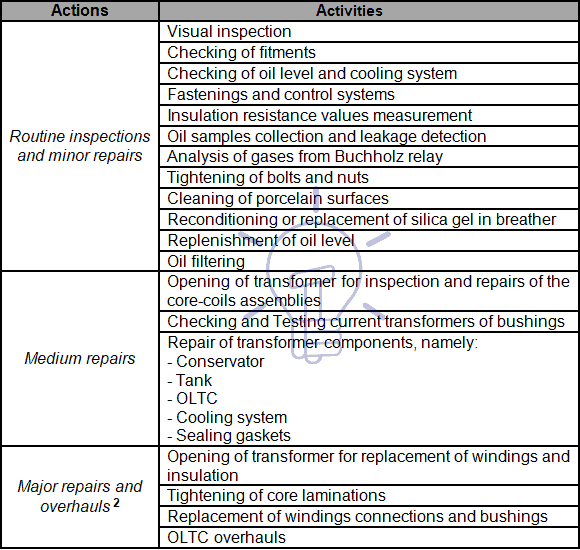 Table 6 – Usual actions of each type of maintenance activities

Also read: How to Find the Rating of Transformer in kVA (Single Phase and Three Phase)?

During maintenance period or after a major repair operation, it is necessary to collect a sample of the oil to proceed to the tests defined by IEC[5] Standard 60296 for FAT.

It is necessary to take certain precautions when collecting a sample, in order to avoid the sample to be contaminated.

DGA, one of the most valuable diagnostic tools available, is a procedure used to assess the condition of an oil-filled transformer from an analysis of the gases dissolved in the cooling/insulating medium.

It is a well established technique that is cost effective, providing essential information from a relatively simple, non-destructive test based upon oil sampling.

Whilst the analysis is normally done in a laboratory, on-line devices are also available.

The results reveal much about the health of the oil and of its properties as an insulating medium, including its present condition, any changes that are taking place, the degradation effects of overload, ageing, the inception of minor faults and the most likely cause of major failures.

It should be noted that a severe fault may also produce free gases that may be collect in the Buchholz relay. 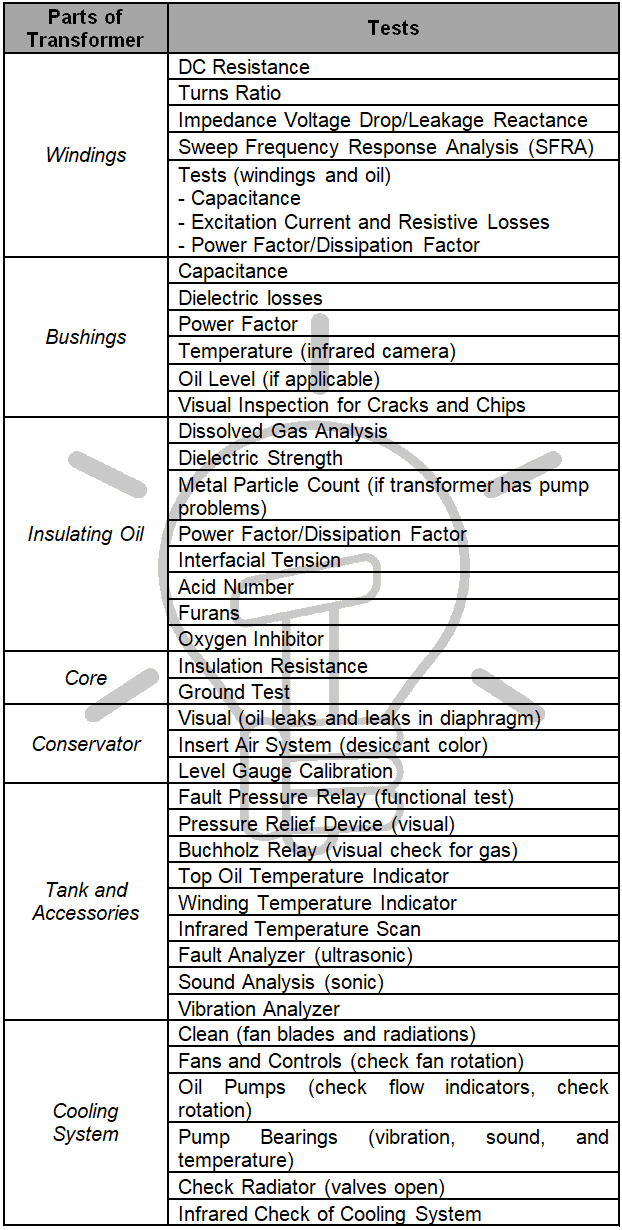 Bushings without a potential tap are normally tested from the bushing top conductor to ground.

This test results are compared with factory tests and/or prior tests to determine deterioration.

About 90% of bushing failures may be attributed to moisture ingress evidenced by an increasing power factor.

Frequency Response Analysis (SFRA)[6] consists of measuring the impedance of transformer windings over a wide range of frequencies and comparing the results of these measurements to a reference set.

Differences may indicate damage to the transformer, which can be investigated further using other techniques or by an internal examination. The swept frequency method for SFRA requires the use of a network analyzer to generate the signal, take the measurements and manipulate the results.

This test should be applied when hydrogen is increasing markedly in the DGA.

Vibration analysis by itself cannot predict many faults associated with transformers, but it is another useful tool to help determine transformer condition.

Vibration can result from loose transformer core segments, loose windings, shield problems, loose parts, or bad bearings on oil cooling pumps or fans. Extreme care must be exercised in evaluating the source of vibration. Many times, a loose panel cover, door, or bolts/screws lying in control panels, or loose on the outside have been misdiagnosed as problems inside the tank.

To do this test, the intentional core ground must be disconnected.

This may be difficult, and some oil may have to be drained to accomplish this.

On some transformers, core grounds are brought outside through insulated bushings and are easily accessed.

Expected values of insulation resistance are:

Values between 10 and 100 MΩ reveal possible damage of insulation between the core and the ground and values lower than 10 MΩ can origin destructive circulating currents and must be further investigated.

Infrared thermography (IR) is a noncontact and nondestructive way to detect problems in electrical systems.

All electrical and mechanical equipment emits heat in the form of electromagnetic radiation. Infrared cameras, which are sensitive to thermal radiation, can detect and measure the temperature differences between surfaces.

Abnormal or unexpected thermal patterns can be indicative of a problem with the equipment problems that could lead to a breakdown or failure, or cause a fire.

Commonly Infrared Analysis is done each 2 or 3 years, while equipment is energized and under full load, if possible, but special functioning and environment conditions may require to conduct IR annually.

IR analysis should also be conducted after any maintenance or testing to see if connections that were broken were remade properly. Also, if IR is done during factory heat run, the results can be used as a baseline for later comparison.

The following components of transformers are usually subjected to IR analysis:

Radiators must be examined with an IR camera and compare them with each other.

If visual inspection shows the valves are open, the radiator or segment must be isolated, drained, and removed and the blockage cleared.

A transformer operating with reduced cooling will have its useful life is drastically shortened (an increased operating temperature of only 8 to 10oC will reduce transformer life by one-half).

IR scans of bushings can show low oil levels, which would call for immediate De-energizing and replacement.

In general the reason for this is that the seal in the bushing bottom has failed, leaking oil into the transformer. The top seal has probably failed, also allowing air and moisture to enter the top.

Too high oil level in bushings generally means the seal in the bottom of the bushing has failed and oil head from the conservator, or nitrogen pressure, has pushed transformer oil up the bushing.

Another reason a bushing can exhibit high oil level is the top seal leaking, allowing water to enter. The water migrates to the bushing bottom displacing the oil upward.

Over 90% of bushing failures are attributed to water entrance through the top seal.

Bushings commonly fail catastrophically, many times destroying the host transformer and nearby equipment and causing hazards to workers. Previous IR scans of the same bushing must be compared with the current scan.

Bushings have two internal connections, one in the head and another much deeper inside connected to the transformer coils.

Problems with cracks have been found in certain insulators that affect the electrical and mechanical strength of the insulator.

When the crack becomes severe enough a temperature increase may become evident.

The source of the heat is inside the OLTC casing and is considerably hotter than the indicated temperature.

An external OLTC compartment should be no warmer than the body of the transformer. If it is warmer, it indicates probable heating of the internal tap connections.

One difficulty with tap inspections is that all taps are not connected at the time of the inspection so results may not be conclusive.

[2]To be carried out after a severe internal fault or each 8-10 years of continuous functioning, namely when the transformer is subjected to severe overload cycles or external short-circuit. These activities must be performed by specialized personnel.

[3] MEGGER is a trade mark, but this equipment is known under this name.

[6] Only if this test was performed during FAT – Factory Acceptance Tests.

All About Electrical Protection Systems, Devices And Units