In different types of solar panels designs, both the bypass and blocking diodes are included by the manufactures for protection, reliable and smooth operation. We will discus both blocking and bypass diodes in solar panels with working and circuit diagrams in details below.

Bypass Diode in a solar panel is used to protect partially shaded photovoltaic cells array inside solar panel from the normally operated photovoltaic string in the peak sunshine in the same PV panel. In multi panel PV strings, the faulty panel or string has been bypassed by the diode which provide alternative path to the flowing current from solar panels to the load.

Blocking Diode in a solar panel is used to prevent the batteries from draining or discharging back through the PV cells inside the solar panel as they acts as load in night or in case of fully covered sky by clouds etc. In short, as diode only passes current in one direction, so the current from solar panels flows (forward biased) to the battery and blocks from the battery to the solar panel (reverse biased). 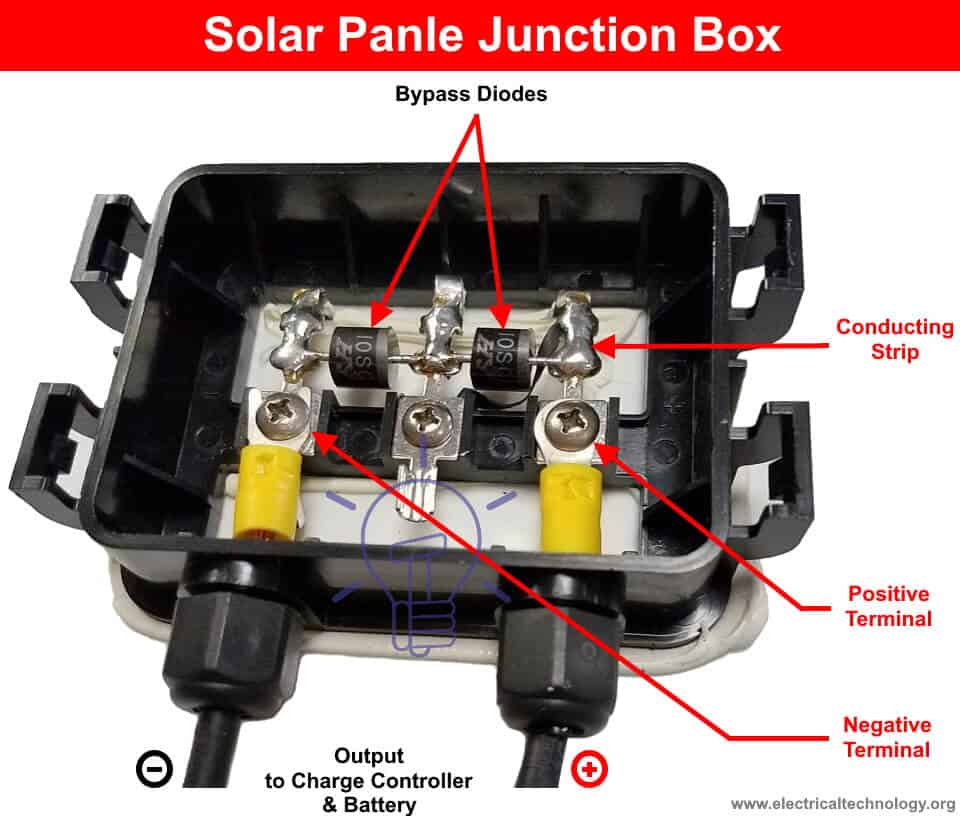 What is a Diode?

They are made off semiconductor materials such as Silicon and Germanium. They offer high resistance to the current in one direction (reverse bias) and act a short circuit path for current in the opposite direction (forward bias). Following is the generic symbol of a diode with anode and cathode terminal.

Solar panels system is the best alternative of wide range (mW to MW) of free electrical energy and can be used with On-Grid or Off-Grid power system. It can be installed wherever you want within the sunlight range to generate electrical power.

One of the most factor which affect the output and efficiency is fully or partially shaded solar panels due to clouds, trees, leaves, building etc. In this case, some of the photovoltaic cells are not able to generate power as they are not exposed to the direct sunlight. In this scenario, the affected cells acts as a load and may be damaged due to hot-spot. That is the reason why we need a bypass diode in a solar panel. 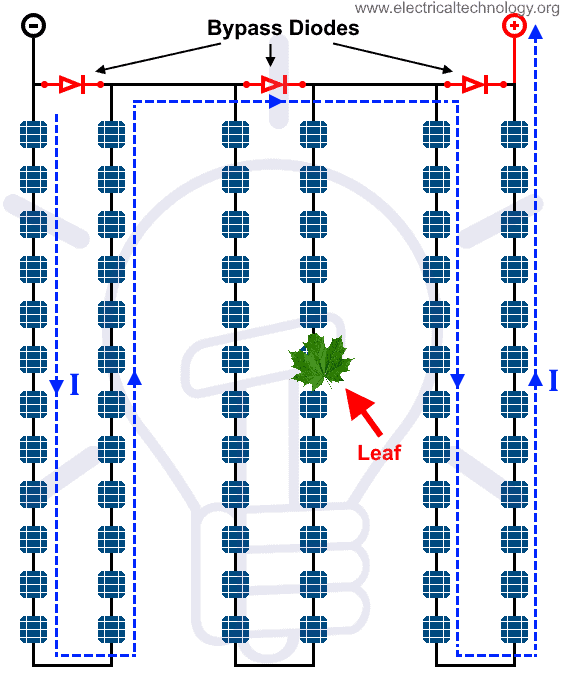 Lets see below how the shaded solar panels can be dangerous and how the bypass diode prevent the solar panels or damaging the the photovoltaic strings.

Suppose, there is no bypass diodes connected across the PV cells. As you can see, the photovoltaic cells are connected in series string (positive terminal is connected to the negative terminal of second one solar panels and so on).

As a normal operation, all the photovoltaic cells are working perfectly i.e. all the three PV cells producing the rated power in currents and volts. The power is additive in both series and parallel connection. So we get the ideal maximum rated power in Amperes and volts. The flow of current is shown in blue dotted lines from PV cells to the output load. 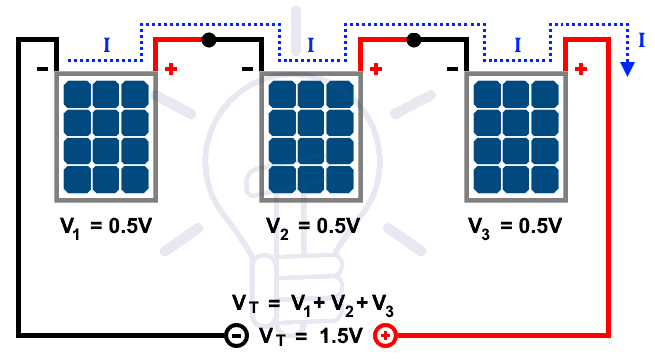 But what in case of shaded cell(s) ? And what if there is no bypass diode as well? Lets see what happens next.

In case of fallen leaves or clouds, the shaded photovoltaic cells wont be able to produce electrical energy and acts as a resistive semiconductor load. In case of non-existence of bypass diodes, energy produced by PV cells string facing direct sunlight will start to flow to the shaded cells as they behaves as load as well. This excessive current will make the shaded load cells heated as they dissipate power which leads to hot-spot and may damage or burn the affected cell(s).

As voltage drops occurs at the shaded cells, the normal cells without shades try to adjust the voltage drop by increasing the open circuit voltage. This way, the affected shaded PV cells becomes revere biased and negative voltage appears in the opposite direction across its terminals. This negative voltage causes to flow the current in the opposite direction in the affected shaded PV cells which consume power at the rate of operating current and short circuit current ISC. This way, the shaded cell inside a solar panel will dissipates power instead of producing it as reverse voltage drops occurs in it due to flow of electronic currents. This whole process will decrease the overall efficiency or may lead to damage and explode the PV cells in a solar panel.

The blue dotted lines shows the flow of currents i.e. some current are flowing from normal cells# 1 and cell# 3 to the affected shaded cell# 2. In case of open circuit, all the currents may flow to the affected cells while in case of connected load to the PV panel, some current flows to the load with decreased rate. 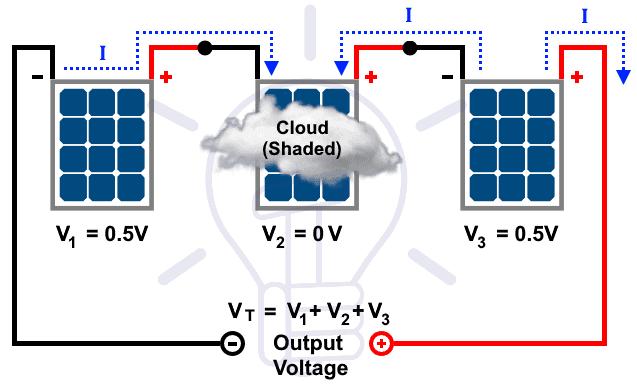 Now, these are the reason we need bypass diodes in a solar panel. Let’s see what happens when there is a bypass diode in PV panel as follow.

Now, lets see how can we protect a solar panel or photovoltaic array and strings from partial of fully shaded PV cell effects. That is a Bypass diode. Bypass diodes can be used by connecting them in parallel with the PV cell of a series connected string array to eliminate the risk factor and protect the solar panels from overall damage and explosion in case of full or partial shades.

Bypass diodes are connected externally across (in parallel) with the photovoltaic cells in reverse bias (Anode terminal connected to the +Ve and Cathode to the -Ve side of solar cell) which provides an alternate path for current flow in case of shaded cells. The reverse bias bypass diodes wont allow the produced current in the normal cells into the shaded cells.

The flow of generated currents are shown by the blue dotted lines. In case of clear sky, i.e. peak sunshine, the produced current will not flow through the bypass diodes as shown by red dotted lines as they are reverse biased and acts as an open circuit. So total power going to the battery charging or connected load without affecting the efficiency as expected. 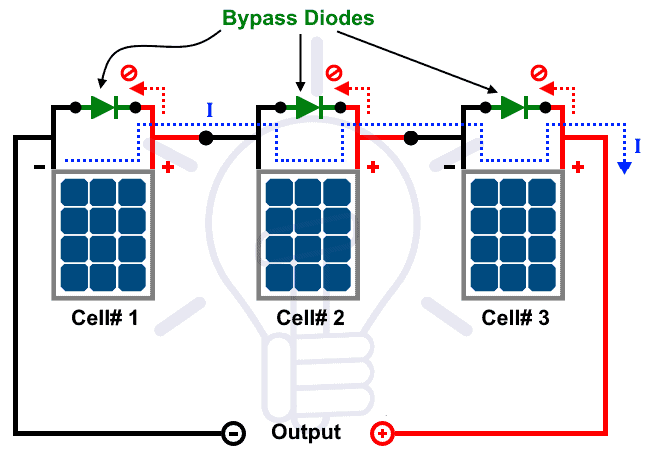 But what happens when there is clouds or building shades on partial cells? lets see follow.

In case of clouds or snow etc, the cell# 2 is affected and wont be able to generate power thus becomes a semiconductor resistor acts as a load now. Now the shaded cells provides negative power (want to dissipates power instead of generating it), the bypass diodes across the cell activated (as it is in forward bias now) and divert the flow of current to the load as shown by the blue dotted lines bypassing the shaded cell in fig.

In short, the bypass diodes connected across the shaded cells#2 provide an alternative path to flow currents from cell#1 to cell#3 and load then. This way, the bypass diode maintains the reliable and smooth operation of PV cells without damaging the PV cell or overall photovoltaic string array with reduced power rate as cell#2 is not able to generate the electrical power. 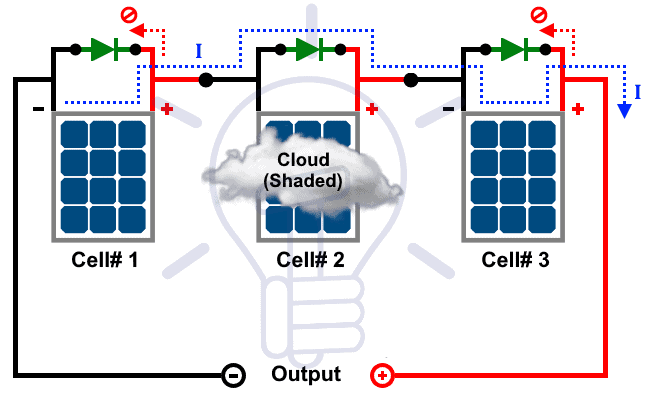 It means when forward biased, the Schottky diode saves almost the voltage level of single photovoltaic cell (which is 0.5V) in each series string. In other words, it provide an efficient operation of photovoltaic cells due to lower power dissipation in blocking mode.

Another advantage of bypass diode connected in parallel with solar cells is that when it is operated (i.e. forward biased), the forward voltage drop is 0.4V (and 0.7V in case of PN-Junction diode) which limits the reverse i.e. negative voltage produced by the shaded cell which leads to reduce the chances of making hot-spots. The rise in temperature may leads to burn or damage the PV cells, but in case of bypass diodes, it returns the shaded cell to the normal operation when cloud has been removed. The above mentioned are the exact reasons why there are bypass diodes in solar panels.

Why There is No Bypass Diode Across Each PV Cell?

Connecting a bypass diode across each single PV cell will lead to expensive and complicated design. Thus, manufacturer install bypass diodes externally in solar panel junction box (back side of PV panel) to string arrays instead of single PV cells.

Commonly, two bypass diodes are sufficient for a 50W solar panel having 36-40 individual PV cells and charging a 12V to 24V series or parallel connection of batteries system depends on the current and voltage rating which is 1- 60A  and 45V in case of Schottky diode.

As mentioned above, the diodes pass the current only in one direction (forward bias) and block in the opposite direction (reverse bias).

This is what actually do the blocking diodes in a solar panel. During the normal operation of solar cells at clear sunshine, the solar cells generates electrical energy and let pass the flow of electron in one direction i.e. from solar panel to the battery or charge controller and other connected loads.

During the night, clouds or no load in the shades, the connected battery will provide the current to the solar cells as they behave like a normal resistors. To overcome this issue, blocking diodes are used to block the current flow back to the solar panels which prevents the draining of battery as well as protect the solar cells from hot-spots due to dissipating power inside it which lead to damage the solar cell. 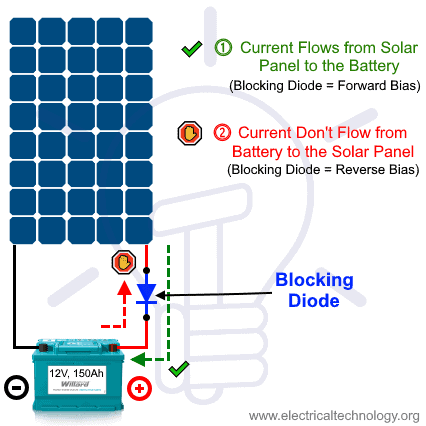 In short, the blocking diodes only provide a single path for current from the solar panel to the battery and block the currents from the battery to the solar cells during night as solar cells are acting as a load instead of generating energy.

As shown in fig below, a leaf is fallen on cell# 3. This way, the generated current will flow from cell#1 and cell# 2 to the out put as it is in normal operation. The current will flow through bypass diode across cell# 3 which is affected and cell# 4 and to the loads then through blocking diodes which is a reliable operation of solar power system as expected. 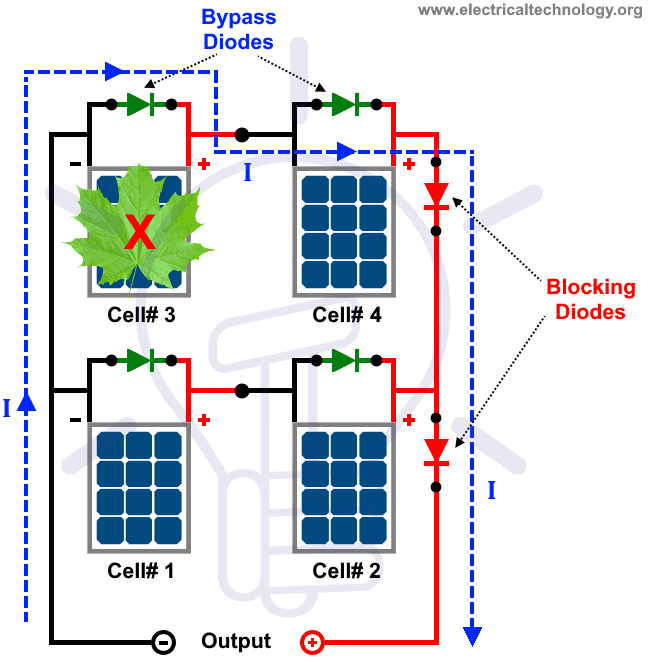 I hope it cleared the concept that what are those bypass and blocking diodes in the junction box at the back side of solar a panel.

How to Calculate the Number of Incandescent Lamps in a Final Sub Circuit?