What is a Diode?

Generally, silicon is used to make a diode. But another semiconductor material like germanium or germanium arsenide is also used. 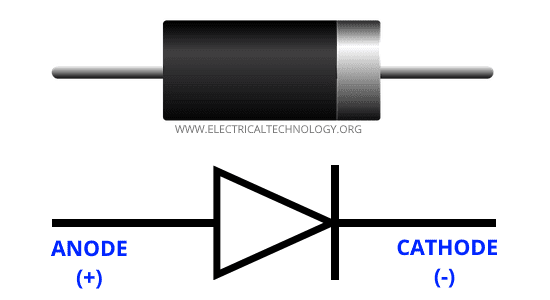 If we add trivalent impurities in silicon or germanium, a greater number of holes are present and it is a positive charge. Hence, this layer is known as the P-type layer.

If we add pentavalent impurities in silicon or germanium, a greater number of electrons are present and it is a negative change. Hence, this layer is known as the N-type layer.

A junction is formed between the P-type and N-type layers. This junction is known as PN junction.

The below figure shows the basic construction of the diode.

The connection diagram is as shown in the below figure.

When such voltage is applied to the circuit, immobile ions create a depletion region as shown in the above figure. The width of the depletion region is large. Hence, no more hole or electron crosses the junction.

It cannot create a flow of electrons or holes even if it is supplied at rated voltage. Hence, it is not possible to flow the current through the diode and it behaves as an open switch.

If we increase the voltage up to reverse breakover voltage, the minority charge carriers get high kinetic energy and collide with atoms. In this condition, the number of covalent bonds broken and a huge number of electrons-holes pair generates a huge amount of flow of current.

Due to this high amount of current, a diode may get damaged. Hence, in general condition, the diode is not connected in reverse bias.

Now, we gradually increase the supply voltage. If we increase a small voltage, the majority charge carrier does not get sufficient energy to cross the depletion region.

When supply voltage increases more than this voltage, the majority charge carriers flowing through the circuit and it made the diode conducting.

In this mode of operation, a very small amount of drop occurs. This drop is known as an on-state voltage drop. The connection diagram of this mode is as shown in the below figure.

The VI characteristic of the diode shows the relation between diode current and voltage. It is a graph between voltage and current where the voltage is on X-axis and current is on Y-axis.

The circuit diagram to obtain the VI characteristic of the diode is as shown in the below figure.

The characteristic is divided into two parts;

When voltage is not applied, the current flowing through the circuit is zero. The point ‘O’ shows this condition where voltage and current are zero. 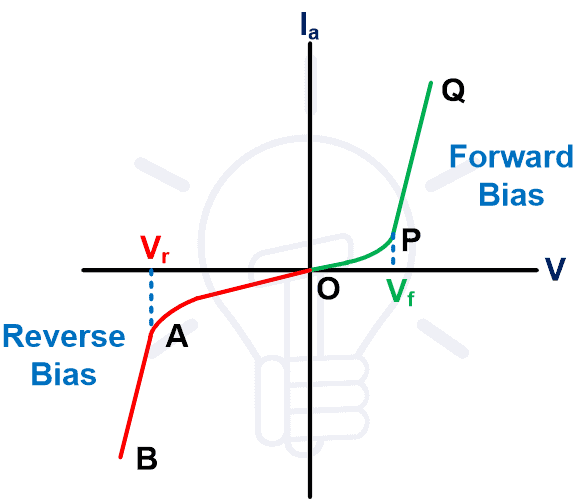 For silicon, breakover voltage is 0.7V and for germanium, this voltage is 0.3V. Once the voltage is increased above this level, the voltage is sufficient to move charge carrier from one carrier to another carrier. And due to the flow of charge, current can flow through the diode.

As shown in characteristics, part OP is the non-linear part. That shows the starting period where voltage is below forward breakover voltage. Here, the current is very small.

The part PQ shows when the voltage is more than the forward breakover voltage. And in this condition, the current increases linearly.

In this condition, the diode behaves as a close switch as it allows the current to flow. For the ideal diode, the on-state resistance is zero and It behaves as a pure conductor.

In reverse bias, the N-type material or cathode is connected with a negative terminal of the battery. This type of connection is known as a reverse bias connection.

In this condition, the voltage is gradually increased with the help of a variable resistor. But this voltage is not sufficient to cause the flow of current.

Because the junction created between P-type and N-type layer is in reverse bias and the depletion width is large in this condition. Therefore, the rated voltage is not sufficient to create a movement of charge carrier.

Hence, the current will not flow through the diode. The curve obtains in this mode is OA. As shown in the graph, a very small amount of current will flow due to the minority charge carrier, this current is not sufficient to turn ON the diode.

When the applied voltage is more than the reverse breakdown voltage, a large current will flow due to the avalanche breakdown. This part is shown as AB in the graph.

There are some advantages of PN junction diodes over vacuum diodes as follow.

What is a Contactor ? Types, Working and Applications