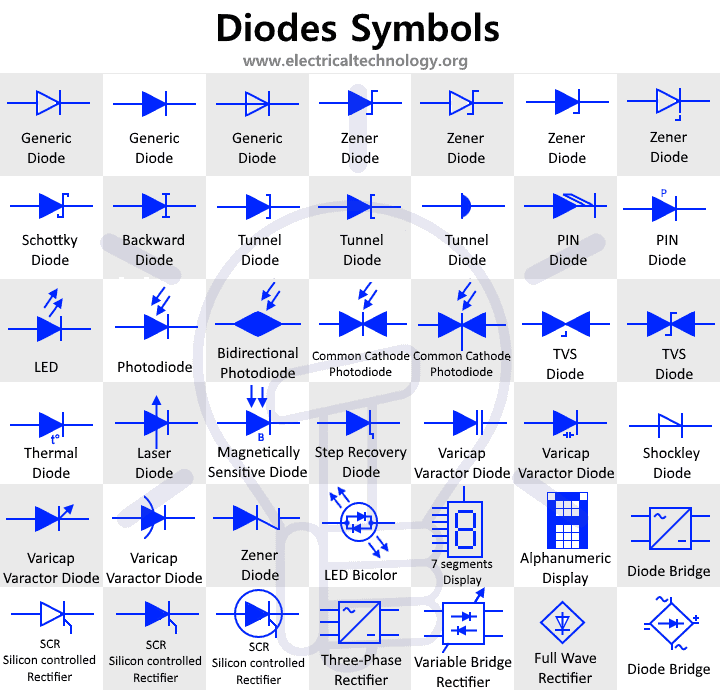 This symbol represents a generic diode or a rectifier diode. It is an electronic component made of semiconductor that allow current flow in one direction and block it in reverse direction.

Zener diode is a type of diode that allows the flow of current in forward direction as well as reverse direction but when the reverse voltage reaches the breakdown voltage known as Zener voltage.

This type of diode made from of a small junction between an N-type semiconductor and a metal. It has no P-N junction like normal diodes. Due to which, it has very low forward voltage drop and fast switching because there is no capacitive junction (P-N junction).

It is a type of diode that operates as a tunnel diode in forward bias & zener diode in reverse bias. but its tunneling effect & zener breakdown voltages are much reduced. It is used in rectification of a small voltage signal (0.1 to 0.6v).

This type of diode is made from heavily doped P & N semiconductor that works on the principle of the tunneling effect. Tunneling is the phenomenon of escaping electrons between the PN junction due to heavy doping. Tunnel diode has a negative resistance region where the current decrease with increase in voltage & they are operated in this region.

It is a three-layer diode where PIN stands for  P-layer, I-layer & N-layer. The ‘I‘ intrinsic semiconductor layer is placed between heavily doped P and an N-type semiconductor. The I layer blocks high voltage in reverse bias. Due to poor reverse recovery time, they are not used in high frequency applications.

LED (Light emitting diode) is a type of P-N junction diode that emits light when configured in forward bias. It converts electrical energy into light energy & the color of the light depends on the energy gap of the semiconductor.

A photo diode converts light energy into electrical energy. When light hits the P-N Junction it creates an electron-hole pair which flows out as electrical current. this symbol represent a photo diode.

A generic photo diode is designed to operate in only reverse bias. This type of photo diode operates in both directions.

This type of photo diode is made from two diodes in a single package with one common terminal i.e. cathode.

Transient voltage suppression diode is a type of diode that is used for suppressing high voltage spikes. It is used for protecting circuit in reversed bias (Unidirectional TVS)

Step recovery diode or snap diode which instantaneously blocks the current flow when its direction is reversed. This is because of the low doping of PN junction.

Varactor or vericap diode is a voltage controlled capacitor that has a variable PN junction capacitance. Its capacitance varies by changing the reverse voltage.

Seven segment displays is made of 7 LEDs in specific pattern. It is used for displaying decimal numerals and English alphabets. However it can be designed to display numerous characters.

It is made of LEDs in 5×7 matrix pattern that is why it is known as dot matrix display. It has 5 columns and 7 rows of dot shaped LEDs next to each other. It is used for displaying characters & shapes in digital devices.

SCR or thyristor is a diode made from PNPN junction. SCR is activated (to conduct current) if the forward voltage increases its forward breakdown voltage or through a positive gate pulse

It is a PNPN diode just like SCR but it does not have any gate control input. it is only triggered by applying forward voltage higher than its breakdown voltage.

It is also known as full wave rectifier. It is made up of four diodes that converts the AC signal into DC signal. the process of conversion from AC to DC is known as Rectification.

A three phase rectifier converts the three phase electrical signal into a DC rectified output. it is a modified form a full wave bridge rectifier where 2 pair of diodes converts each phase.