Power outage, a very common phenomenon especially in third world countries but the 1st world countries are not exempted from it. There are multiple causes for power outages in the form of a natural disaster such as, storm, lightning, snow, earthquake, etc. that causes power failure.

The sudden loss of power is very annoying and it could damage sensitive electronics equipment with an abrupt shutdown. Crucial lifesaving equipment in hospitals that needs to work 24/7 with an abrupt power cutoff could risk someone’s life. In such cases of power failure, we use UPS and inverter to provide backup power. They both provide backup power but there function, circuitry and features are very different. 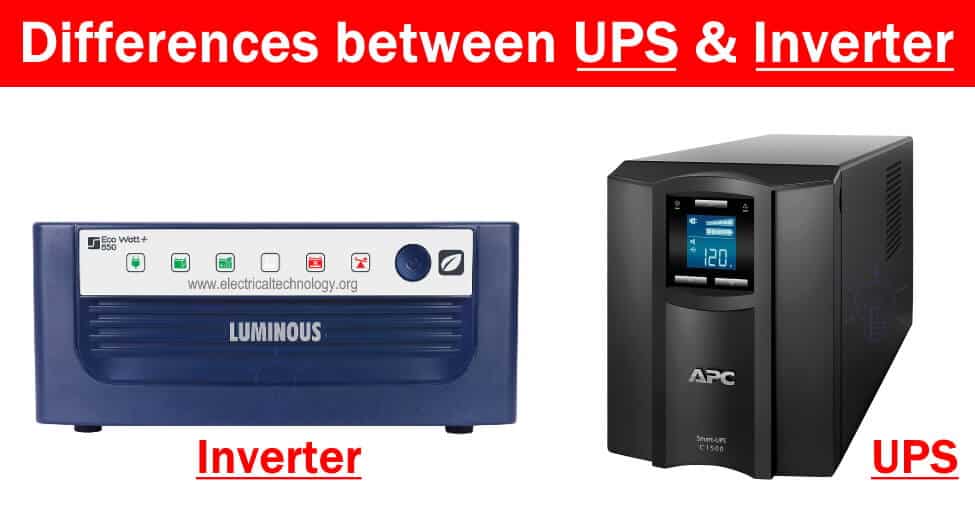 Before going further into the difference, let’s look into what UPS and Inverter is.

What is UPS (Uninterruptible Power Supply)?

UPS is an abbreviation for Uninterruptible Power Supply. It is a device capable of providing backup power in case of power failure. It is connected with a battery that acts as the source of power. 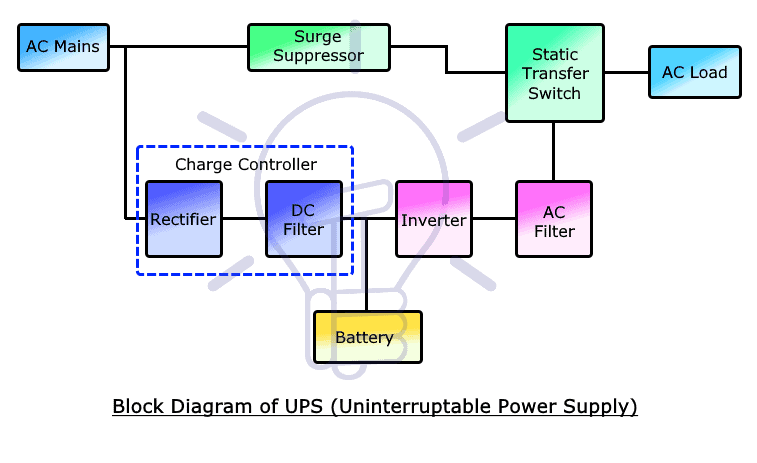 The intelligent circuit is the most crucial part of the UPS and it is what differentiates it from an Inverter. It is responsible for sensing any interruption in the power source and in any case, it switches between the primary power supply (AC mains) and the backup supply (battery). But the most important part is the switching speed. It instantly switches without interrupting its power supply which is why it is called Uninterruptible Power Supply.

This fast switching allows smooth operation of sensitive electronic devices. They are mostly used for computers. It is very frustrating because you can lose data if your computer is abruptly shut down in the middle of doing any important work. It provides enough backup time to save your progress or data and  safely shut down your computer.

The UPS also does include circuits for protection against abnormal conditions such as voltage surges and fluctuations, Under Voltage, Over Voltage, etc.

What is an Inverter?

An inverter is an electronic circuit or device that converts DC into AC. It is used for providing backup supply to non-sensitive electronic devices where a delay in switching time does not matter such as lights, fans etc. The switching speed of an inverter is very slower than UPS and because of this; the sensitive equipment may get damaged.

It does not offer protection against abnormal current and voltages. Therefore, the voltage spikes and surges are one of the drawbacks of Inverter that can damage sensitive electronic devices.

The main difference between the UPS and Inverter is its switching time. The switching time of an Inverter is somewhere between 300 and 500 milliseconds. This much delay can cause a shutdown in computers and you may lose your data. But it does provide a longer backup time.

The Inverters can also be used for the generation of variable voltages and frequency outputs which is why a Variable Frequency Drive (VFD) is also called an inverter. These drives are used for variable speed operation of motors.

Differences between Inverter and UPS

Can a UPS be Used as an Inverter and Vice Versa?

A UPS can be used an inverter while an inverter can’t be used as a UPS. To use a UPS as inverter, simply don’t connect the input supply voltage (120V in US and 230V in EU) to the UPS.

You may only connect the battery as a source to the UPS and it will act as an inverter i.e. it will convert the direct current (DC) from the battery into alternating current (AC) and you can feed it to any electrical appliances rated for AC voltages.

Good to know: A UPS can be an inverter but an inverter can’t be a UPS as Inverter is the part of UPS (uninterruptible power supply).