Modern power grids are extremely complex and widespread. Surges in power overhead lines and other faults can cause massive network failures and permanent damage in power plants and in costumers’ equipments.

If a network failure happens it is necessary to establish a program to restore power, avoiding the power system to suffer a peak current due to the simultaneous connection of all loads 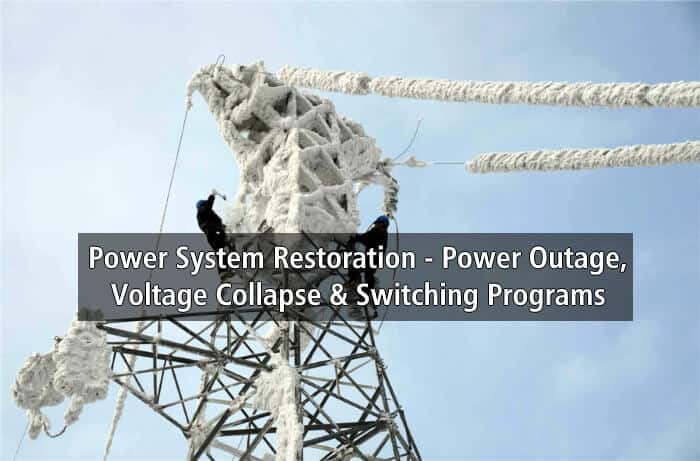 A power outage (also called a power black-out) is a short or long-term loss of the electric power in an area.

There are many causes of power failures in an electricity network. Examples of these causes include faults at power stations, damage to electric transmission and distribution lines (overhead or underground), substations or other parts of the distribution system, a short circuit or overloading.

Power failures are particularly critical at sites where the environment and public safety are at risk.

Institutions such as hospitals, sewage treatment plants and mines or systems such as telecommunication are very sensitive to power failures.

Power outages are categorized into three different phenomena, relating to the duration and effect of the outage: 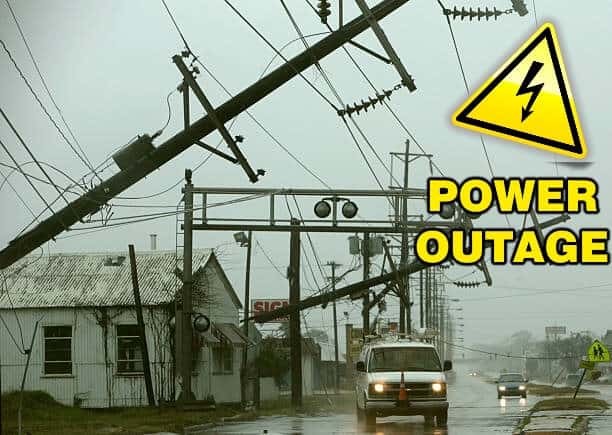 A black-out is a condition where a major portion or all of an electrical network is de-energized with much of the system tied together through closed breakers.

Any area whose tie-lines to the high voltage grid cannot support reasonable contingencies is a candidate for a black-out.

System separations are possible at all loading levels and all times in the year. Changing generation patterns, scheduled transmission outages, and rapid weather changes among other reasons can all lead to black-outs.

Separations due to dynamic instability are typically initiated by multiple contingencies such as loss of corridors, several transmission circuits, several generating units, or delayed fault clearing.

Under certain conditions, a network component shutting down can cause current fluctuations in neighboring segments of the network leading to a cascading failure of a larger section of the network.

Modern power systems and smart grid are designed to be resistant to this sort of cascading failure, but it may be unavoidable.

However, since there is no short-term economic benefit to preventing rare large-scale failures, some utilities a tendency to erode the resilience of the network over time, which is only corrected after a major failure occurs.

Power systems are self-organized critical systems exhibiting unavoidable disturbances of all sizes, up to the size of the entire system. This phenomenon has been attributed to steadily increasing demand/load, the economics of running a power company, and the limits of modern engineering.

While black-out frequency has been shown to be reduced by operating it further from its critical point, it generally isn’t economically feasible, causing providers to increase the average load over time or upgrade less often resulting in the grid moving itself closer to its critical point.

Conversely, a system past the critical point will experience too many black-outs leading to system-wide upgrades moving it back below the critical point. Near the critical point the relationship between black-out frequency and size follows a power law distribution. Other leaders are dismissive of system theories that conclude that black-outs are inevitable, but do agree that the basic operation of the grid must be changed.

Some utilities use smart grid features (such as power control devices employing advanced sensors) to coordinate the grid. Others use electronically controlled High-voltage direct current (HVDC) firebreaks to prevent disturbances from cascading across AC lines in a wide area grid.

The practice of operating these systems much closer to their maximum capacity leads to magnified effects of random, unavoidable disturbances due to aging, weather, human interaction, etc.

While near the critical point, these failures have a greater effect on the surrounding components due to individual components carrying a larger load.

This results in the larger load from the failing component having to be redistributed in larger quantities across the system, making it more likely for additional components not directly affected by the disturbance to fail, igniting costly and dangerous cascading failures.

These initial disturbances causing black-outs are all the more unexpected and unavoidable due to actions of the power suppliers to prevent obvious disturbances (cutting back trees, separating lines in windy areas, replacing aging components etc.).

The complexity of most power grids often makes the initial cause of a black-out extremely hard to identify.

Voltage collapse is the process by which voltage instability leads to the loss of voltage in a significant part of the system.

This condition results from reactive losses significantly exceeding the reactive resources available to supply them.

Voltage collapse can look like both a steady-state problem with time to react and a problem where no effective operator intervention is possible. It is very hard to predict the area that will be affected or electrically isolated from the grid.

Voltage collapse is an event that occurs when an electric system does not have adequate reactive power support to maintain voltage stability in which the sustained voltage level is controllable and within predetermined limits, and may result in outage of system elements and may include interruption in service to customers.

Restoring power after a wide-area outage can be difficult, as power stations need to be brought back on-line.

Normally, this is done with the help of power from the rest of the grid. In the total absence of grid power, a so-called black start needs to be performed to bootstrap the power grid into operation.

The means of doing so will depend greatly on local circumstances and operational policies, but typically transmission utilities will establish localized “power islands” which are then progressively coupled together.

To maintain supply frequencies within tolerable limits during this process, demand must be reconnected at the same place that generation is restored, requires close coordination between power stations, transmission and distribution organizations and a switching program must be established. 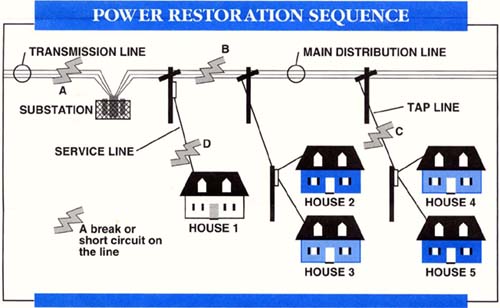 The system restoration sequence and timing will be directly impacted by the various sizes, types, and state of operation of the system generating units prior to the black-out.

After a system has blacked out, the system operators perform a survey of the system status. Circuit breaker positions will not provide a reliable indication of faulted versus non-faulted equipment. Breakers can be found in the closed position, but the associated transmission facility is faulted.

If the system black-out is storm-initiated, this condition is quite possible. The storm can continue to damage equipment after the system is de-energized.

Also, equipment with neutral connections, such as reactors, transformers, and capacitors, may be locked out from the neutral overcurrent conditions during system shutdown. These facilities may be in perfectly serviceable condition. Most relay systems will remain reliable and secure during restoration, provided there is adequate fault current available to activate the relaying. The most questionable relay reliability issues come from re-closing relays.

During electrical switching of networks, loads, transformers and capacitor banks, transient disturbances (during a short time) occur in power systems that may damage key equipment, potentially having a great impact on system reliability.

An oscillation of the power system and electromagnetic pulses (EMP) can be caused by that sudden change of a circuit.

One of those transient disturbances is over-voltage (known as “switching over voltages”) that influences the required insulation level of the network and of the equipments.

During the switching of capacitor banks, high magnitude and high frequency transients can occur.

Transient inrush currents appear during the energization of power transformers can exceed its rated current and may reach the short circuit current.

The power quality will be reduced and peak values can cause misoperation of the network protection schemes.

Up to date, several methods like pre-insertion resistors and “sequential phase energization with grounding resistor” were developed to reduce or respectively eliminate the inrush transients.

An electrical utility which experiences an operating capacity emergency seeks to balance its generation to its load to avoid prolonged outages of service.

The emergency reserve inherent in frequency deviation may be used as a temporary source of emergency energy.

An utility unable to balance its generation to its load removes sufficient load to permit correction of the outage. In the event of a capacity deficiency, generation and transmission facilities are used to the fullest extent practicable to promptly restore normal system frequency and voltage.

If all other steps prove inadequate to relieve the capacity emergency, the system may take immediate action which includes but is not limited to manual load shedding.

If the overload on a transmission facility or abnormal voltage/reactive condition persists and equipment is endangered, the affected system or pool may disconnect the affected facility shutdown. If abnormal levels of frequency or voltage resulting from an area disturbance make it unsafe to operate the generators or their support equipment in parallel with the system, their separation or shutdown would be accomplished in a manner to minimize the time required to re-parallel and restore the system to normal.

After a system collapse restoration begins when it can proceed in an orderly and secure manner. Restoration priority is normally given to the station supply of power plants and the transmission system.

Even though restoration is intended to be expeditious, system operators seek to avoid premature action to prevent a re-collapse of the system.

Customer load is normally restored as generation and transmission equipment becomes available, since load and generation must remain in balance at normal frequency as the system is restored. When voltage, frequency and phase angle permit, the system operator may re-synchronize the isolated area with the surrounding area.

In order to systematically restore loads without overloading the remaining system, opening circuit breakers may isolate loads in blacked-out areas.

After determining the extent of the black-out and assessing the status of system equipment, the switching operations necessary for system reintegration represent a significant portion of the restoration process.

Depending on the specific utility’s requirements, there are two general switching strategies which may be used to sectionalize the transmission system for restoration.

The first is the “all open” approach where all circuit breakers at affected (blacked out) substations are opened.

The second strategy is the “controlled operation” where only those breakers necessary to allow system restoration to proceed are opened.

If this procedure is not possible the network must be planned to distribute the loads, particularly important loads, by several feeders, and even to have dedicated feeders for the most important loads.