Key Difference between RAM and ROM 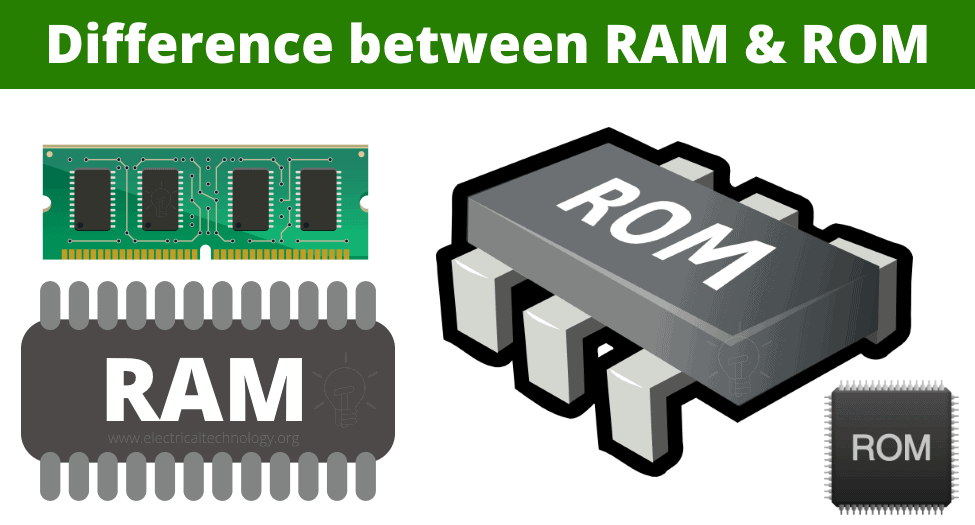 RAM and ROM are the two types of memories used in microcontrollers or computers. They are both used for storing information and they both belong to the classification of primary memory which is the memory directly accessed by the CPU.

RAM and ROM are two very different memories that differ from each other based on its usage, storage feature, capacity, speed, etc. Before going further into the differences between RAM and ROM, let’s discuss a little bit about them.

RAM is an acronym for Random Access Memory. It is a type of primary memory that stores the information currently being used by the CPU. The information could be the data being processed or the program code. It is a read-write memory meaning it can do both stores (write) and access (read) the data at almost the same time. But the RAM is a volatile or temporary memory i.e. its content erases when the power source is removed.

The RAM is a fast access memory because it can store and access the data randomly at any time regardless of its physical location. It stores the necessary instructions required for starting the device and the data being used by the processor. It increases the processing speed of the system by quickly transferring the data between the components.

The RAM has two types DRAM (Dynamic RAM) and SRAM (Static RAM), please refer to the article “types of memory” to know more about its types and advantages over each other.

ROM or Read Only Memory is also a type of primary memory but it stores the data permanently. It is a non-volatile memory i.e. the content of its data does not get erased when the power source is removed.

As the name suggests, it is a Read-Only memory, meaning the data cannot be altered but it can be accessed any number of times. The CPU can only access the data and cannot write it. The program or code is stored in the ROM during its manufacturing. Although there are some modified versions of programmable ROM such as PROM, EPROM and EEPROM (refer to the article “Types of memory”) that can be reprogrammed several hundred times using special devices.

The ROM stores the necessary instruction required for booting up the device or the program code for the device. The data stored is not directly accessible by the CPU thus the RAM is used for temporarily storing the data prior to access by the CPU.

Main Differences between RAM and ROM

The following tabular form shows the comparison between RAM vs ROM.

Advantage of RAM over ROM

Advantage of ROM over RAM

The Conclusion of this article is that we cannot replace the RAM and ROM with each other. A system needs both types of memories to perform perfectly and efficiently. The RAM is used for storing the data for processing and the ROM is used for starting the system.

Difference Between CPU and GPU - Comparison