What are the Main Differences Between Diode and SCR (Thyristor)?

Diode and Thyristor are both semiconductor switches that control the flow of current. they are unidirectional switches used in power supplies and other electronics circuits to control and protect sensitive equipment. Diode and thyristor both share some similarities such as they both are used for rectification and thyristor can be called a controlled diode. But they are very different from each other based on their structure, working, ratings and applications. 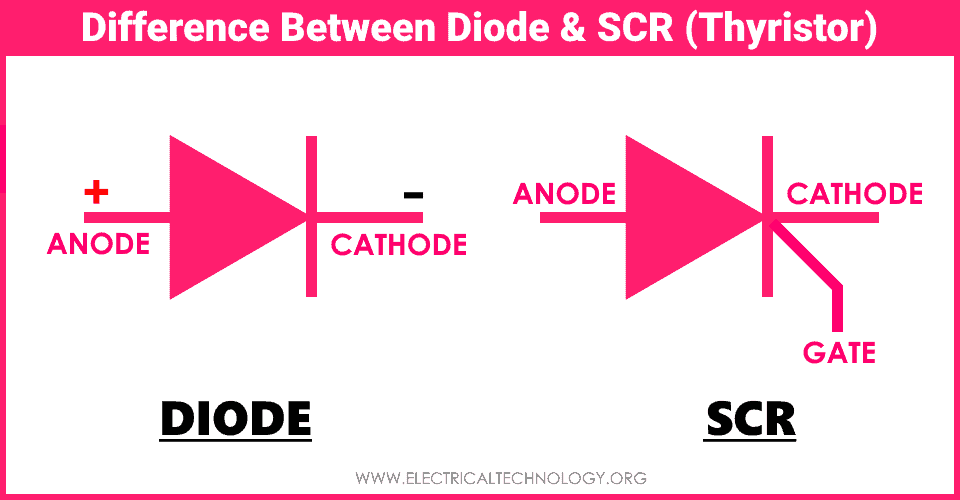 Before going into the list of differences between diode and thyristor, let’s discuss their basics first.

A diode is an electronic switch that allows the current in only one direction. It is an uncontrolled unidirectional switch mainly used for rectification of AC into DC. It has two semiconductor layers and It has 2 terminals called Anode and Cathode. It allows the current from anode to cathode and blocks the current flow from cathode to anode. 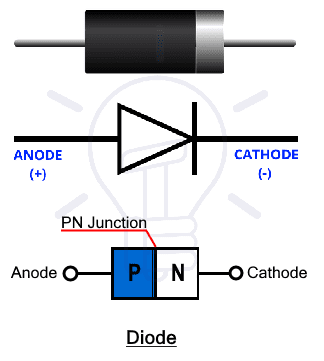 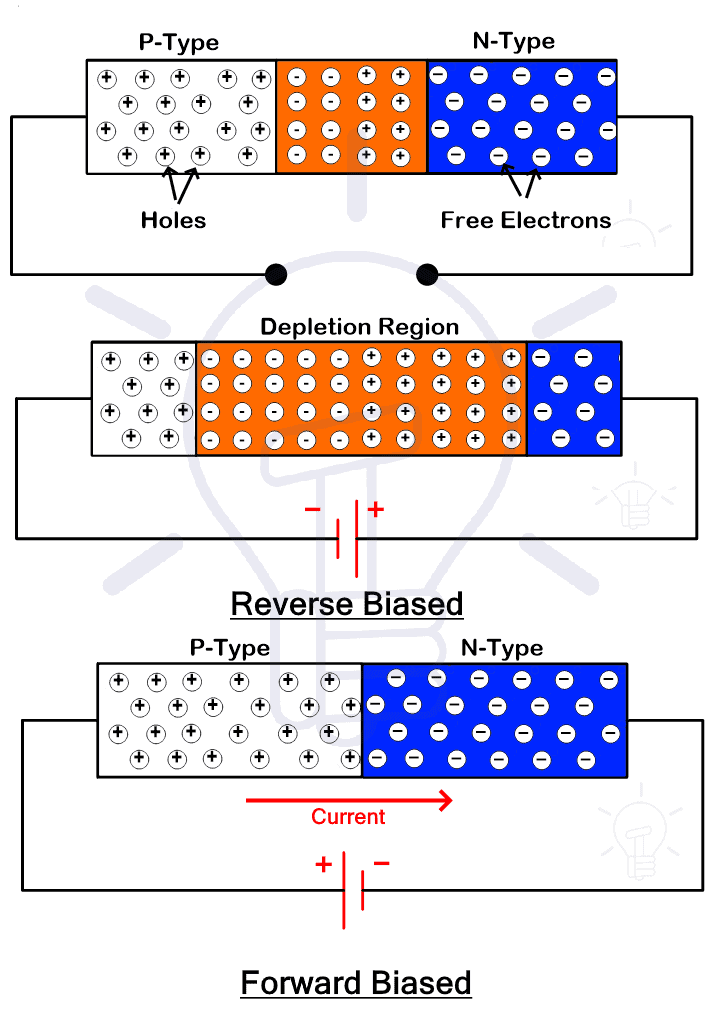 There are many types of diodes each type is used for different applications. Some of these diodes are, LED  “Light-emitting diode”, Zener diode, Avalanche diode, Photodiode, Laser Diode, Varactor, Tunnel Diode and basic PIN Diode etc.

SCR or Silicon Controlled Rectifier is a member of the thyristor family. It is generally known as a thyristor. It is a semiconductor controlled unidirectional switch that has 3 terminals and made of 4 layers. It converts AC into DC with controlled switching, suggested by its name.

It has 3 terminals: Anode (A), Cathode (C) and Gate (G). The anode and cathode are the main terminals used for the conduction of current while the Gate terminal is the control terminal used for triggering or firing the SCR. 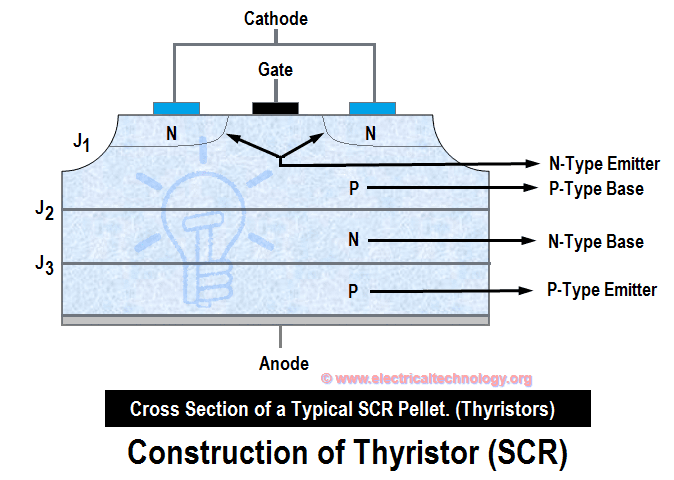 Good to Know: The word of Thyristor is derived from the combination of two words i.e. Thyratron and Transistor = Thyristor. Where a thyratron is a gas filled tube device used for control rectifier and high power electrical switching applications.

The following figure given below shows the structure and a symbolic representation of a thyristor. 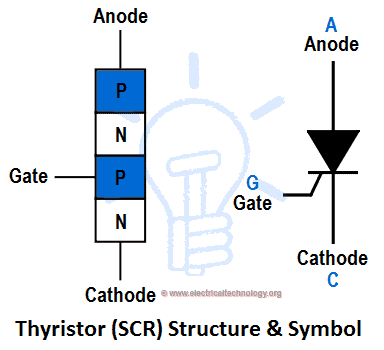 SCR works in three modes: Forward Blocking, Forward Conduction and Reverse Blocking Mode. In forward blocking mode, the SCR is connected in forward bias without any triggering pulse at the gate. In this mode, the SCR does not conduct.

In reverse blocking mode, the SCR is connected in reverse bias. The SCR does not conduct in this mode even if there is a control signal.

In forward conduction mode, the SCR is connected in forward bias and it is triggered by applying a triggering pulse at its gate terminal. Forward conduction also occurs if the voltage exceeds its breakdown voltage but it is a destructive method and it can damage the device.

When the SCR is connected in forward bias i.e. the anode’s potential is higher than cathode’s, the two junctions at the end become forward bias while the middle junction becomes reverse biased as shown in fig (b). The reverse-biased junction does not allow the current. applying a positive voltage pulse to the gate turns the junction in forward bias creating a path for the current to flow from anode to cathode.

When the SCR is in forward conduction mode, removing the gate pulse will not switch it off. But the voltage between anode and cathode must be brought down so that the current falls below the “holding current” limit. By doing so, the SCR breaks the current flow and goes into blocking mode.

A thyristor is a latching device which means when it switches ON it will remain switched ON whether there is a gate signal or not. It only requires a momentary pulse to start conduction. Zero crossing is required to break its conduction state.

Since the thyristor does not stop conduction when the gate signal is removed, it needs extra circuitry to turn off the thyristor at command.

SCR is mainly used for controlled rectification and to control the power supplied to any load such as lamp dimming, regulators and motor control.

The SCR is used for managing and controlling large power therefore they are rated in Kilowatts. and they are bulkier in size as compared to a diode.

The following comparison table shows the main differences between a diode and a thyristor (SCR).

The following different properties differentiate both Diode and an SCR “Thyristor” having different characteristics and applications.

Rectification is the conversion of alternating current AC into direct current DC.

Difference Between Diode and Transistor

Difference Between BJT and FET Transistors