Main Difference between Online UPS and Offline UPS – Which One to Use?

UPS, Uninterruptible Power Supply is a device that supplies power in case of power failures. A UPS can be either Online UPS or Offline UPS. Both types of UPS can be used as a backup power source but there are many differences between them. 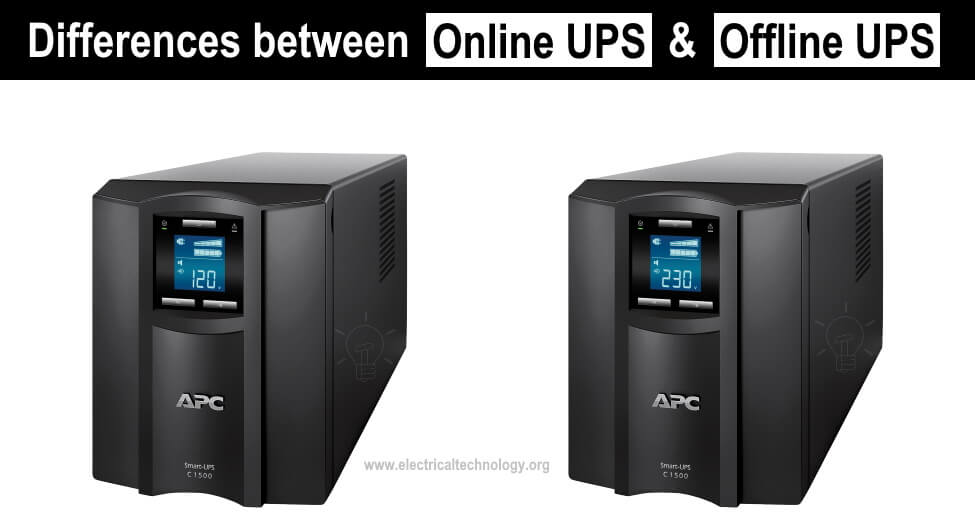 What is UPS (Uninterruptible Power Supply)?

A UPS system utilizes a DC power stored in the battery as its backup source. The UPS charges the battery from the AC mains through a Rectifier and charge controller circuit. At the same time, it supplies power to the output AC load. In case of power failure, the UPS utilizes this charged DC power in the battery and converts it into AC using an inverter and supplies it to the AC load.

Now the switch over between the sources (AC mains and the battery in case of power failure) is instantaneous. But it does take some time. This time delay during the switching may affect some sensitive electronic equipment while other devices may tolerate it in a specific range. This is where Online UPS and Offline UPS comes into play.

What is Online UPS?

The Online UPS is a type of UPS that supplies power to the AC load through the Rectifier and Inverter Combo in normal operation and uses an inverter to supply AC power during a power failure. Therefore, the output power supply always stays ON and there is no need for switching. Hence, there is no time delay in switching between its sources. There is no interruption in the case of power failure even for a nanosecond. 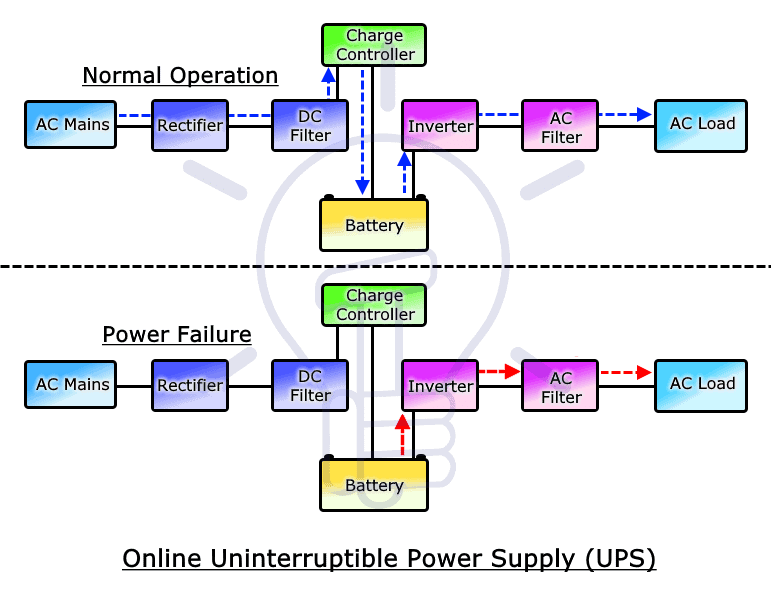 During normal operation, it converts the AC supply from the AC mains into DC using a rectifier and charges the battery using a charge controller circuit. Now at the same time, the DC power from the charged battery is being converted into AC using an inverter to supply it to the output AC load.

Therefore, Online UPS has a zero time delay when switching its power source. It is also why it is known as Online UPS because it stays ON even during its normal operation.

Since the current drawn by the AC load is continuously flowing through its whole circuit, the temperature of the system increases. Therefore, it needs comparatively larger heat sinks and the components that can withstand high temperature and it can tolerate current flow for very long duration. Due to such a requirement, the cost of Online UPS increases significantly.

It continuously draws current from the battery which quickly reduces the lifetime of the battery compared to offline UPS. They are more inefficient because they continuously stay ON even in normal operation.

On the other hand, it does offer high-quality output because there is no gap during the switching between the source supplies. It completely isolates the output from the AC mains. Therefore, it helps in protection against the distortions or fluctuations in the AC mains.

What is Offline UPS?

The offline UPS is a type of UPS that directly supplies the power to the AC load from the AC mains in normal operation and uses an inverter to power the AC load from the DC battery. Since there are two separate lines of supplies, the output supply must be switched between the two sources.

The switching speed of an Offline UPS is around 5ms which is enough to keep a computer from shutting down. But not fast enough to keep a smooth operation of sensitive equipment in hospitals. 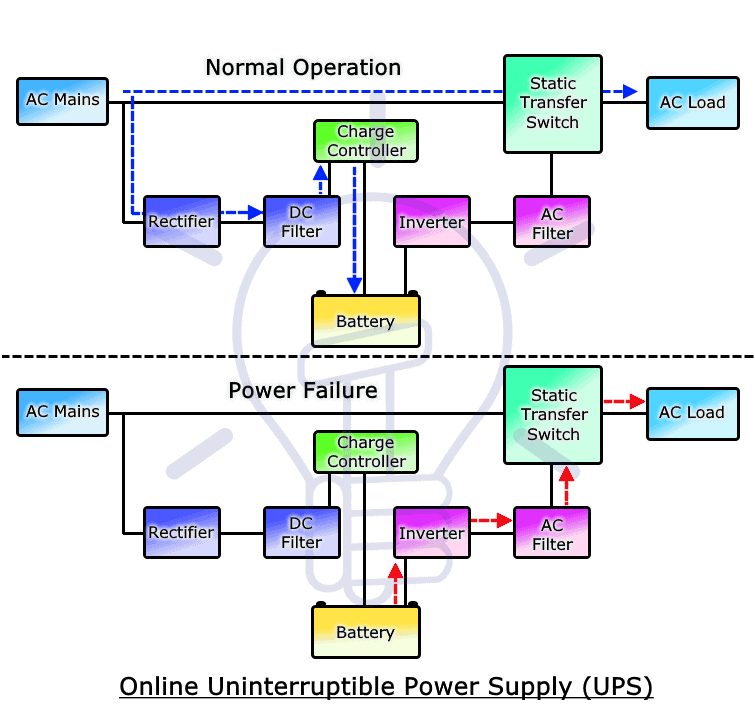 During normal operation, the power from AC mains is directly supplied to the output through a static transfer switch. At the same time, the AC is converted into DC using a rectifier to charge the battery using a charge controller. But unlike Online UPS, the inverter does not draw current from the battery until the primary supply (AC main) is interrupted.

When the primary supply breaks, the battery stops charging and the static switch transfer the output line to the inverter side very quickly. At the same time, the inverter starts drawing current from the battery which is then supplied to the AC load.

Since it stays off when it draws current from the AC line during normal operation, it is known as Offline UPS.

The Offline UPS mostly stays off in normal operation and because of that, the temperature of the components stays low. Therefore, it requires smaller heat sinks and the components with a lower tolerance can be used which also decreases the overall cost of the offline UPS.

Since it stays off in its normal operation and does not use the battery continuously, the efficiency of the system increases.

But the downside of offline UPS is that the directly supplied AC is not completely isolated from the load. Therefore, there is no protection between the load and source and the distortion or fluctuations in the Ac mains can damage the connected load.

Which one to Use, Online or Offline UPS & Why?

Is online or offline UPS Better? and When to use it? it totally depends on multiple factors such as cost, usage and specific conditions etc. For example,

When to Use Online UPS:

When to Use Offline UPS:

The conclusion of this article showing the key difference between ONLINE & OFFLINE UPS systems is that the online UPS has zero time delay between the switching and they are expensive. while the Offline UPS has a time delay of 5ms but they are inexpensive. Based on efficiency, the offline UPS is far better than Online UPS and it should be used for domestic purposes. The Online UPS should be only used for very sensitive electronic equipment.

Difference Between Alternator and Generator with Comparison