Ground wires or earth wires are bare conductors supported at the top of transmission towers. They serve to shield the line and intercept lightning stroke before it hits the current carrying conductors below i.e. power lines.

Ground wires normally do not carry current. Therefore, they are often made of steel. The ground wires are solidly connected to ground at each tower in transmission and distribution system. 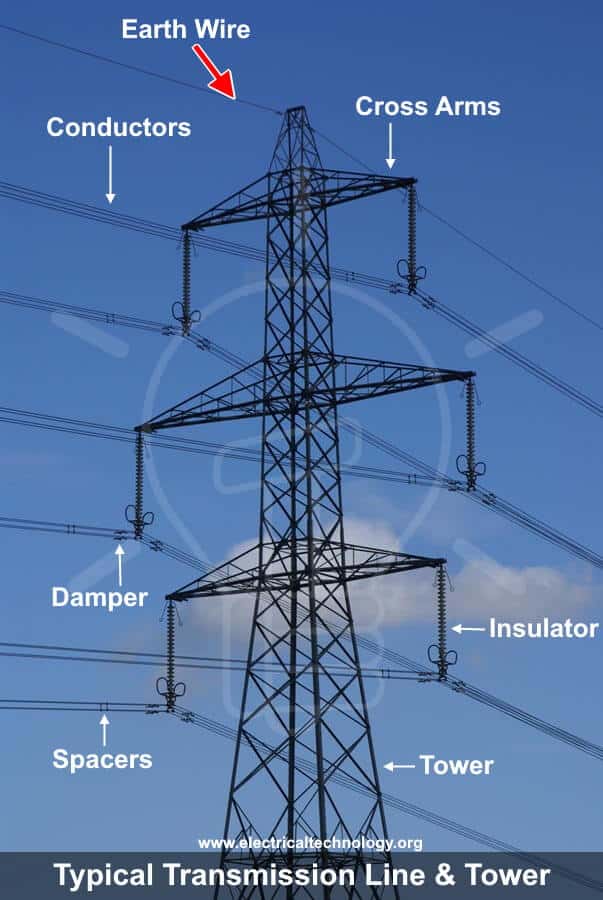 In case of lightning strikes, the resistance between earth and tower base should be low for effective protection. when lightning hit the ground wire, the produced waves travel along the line in opposite direction and reach to the adjoining tower. The tower passes them safely to the earth which ensures no power outage in case of lightning stroke faults.

The main purpose of ground wire is to protect the power lines conductors from direct lightning strokes. In HV transmission lines, lightning strokes may cause a voltage rise at the tower peak before reaching to the ground wire which may back flash-over from the tower to the conductors and insulators. To minimize the chances of insulator flash-overs, it is important to reduce the increase in voltage on the top of the tower as ground wire is not enough to protect the insulator set from flash-over. The chance of fault may be reduced by proper grounding and earthing of the poles and tower by deep earthing rods or counterpoise wires.

What is the Admittance and how Does it calculate ?