What is Electrical Earthing or Grounding?

To connect the metallic (conductive) Parts of an Electric appliance or installations to the earth (ground) is called Earthing or Grounding.

In other words, to connect the metallic parts of electric machinery and devices to the earth plate or earth electrode (which is buried in the moisture earth) through a thick conductor wire (which has very low resistance) for safety purpose is known as Earthing or grounding.

To earth or earthing rather, means to connect the part of electrical apparatus such as metallic covering of metals, earth terminal of socket cables, stay wires that do not carry current to the earth. Earthing can be said as the connection of the neutral point of a power supply system to the earth so as to avoid or minimize danger during discharge of electrical energy. 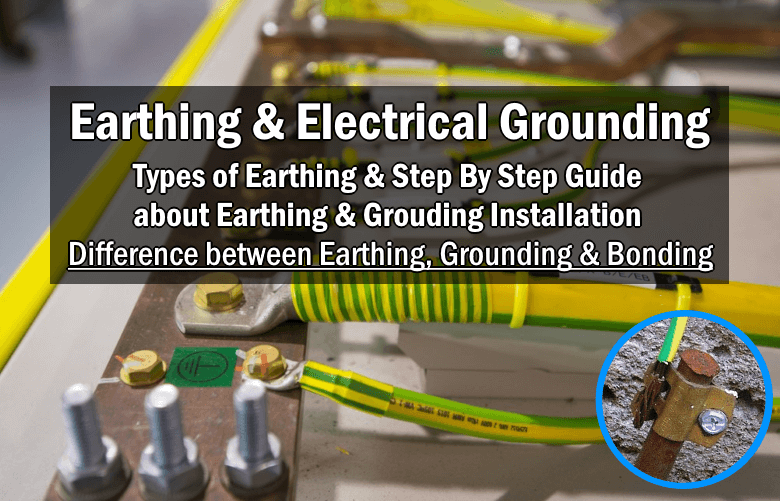 Difference between Earthing, Grounding and Bonding

Let me clear the confusion among earthing, grounding and bonding.

The word Bonding used for jointing two wires (as well as conductors, pipes or appliances together. Bonding is known as connecting the metallic parts of different machines which is not considered to be carrying electric current during normal operation of the machines to bring them at the same level of electric potential.

Why Earthing is Important?

The primary purpose of earthing is to avoid or minimize the danger of electrocution, fire due to earth leakage of current through undesired path and to ensure that the potential of a current carrying conductor does not rise with respect to the earth than its designed insulation.

When the metallic part of electrical appliances (parts that can conduct or allow passage of electric current) comes in contact with a live wire, maybe due to failure of installations or failure in cable insulation, the metal become charged and static charge accumulates on it. If a person touches such a charged metal, the result is a severe shock.

To avoid such instances, the power supply systems and parts of appliances have to be earthed so as to transfer the charge directly to the earth. This is why we need Electrical Earthing or Grounding in electrical installation systems.

Below are the basic needs of Earthing.

Points to be Earthed

Earthing is not done anyhow. According to IE rules and IEE (Institute of Electrical Engineers) regulations,

That part of the earthing system which interconnects the overall metallic parts of electrical installation e.g. conduit, ducts, boxes, metallic shells of the switches, distribution boards, Switches, fuses, Regulating and controlling devices, metallic parts of electrical machines such as, motors, generators, transformers and the metallic framework where electrical devices and components are installed is known as earth wire or earth continuity conductor as shown in the above fig.

Size of the Earth Continuity Conductor or Earth Wire depends on the cable size used in the wiring circuit.

Earthing lead is the final part of the earthing system which is connected to the earth electrode (which is underground) through earth connecting point.

There should be minimum joints in earthing lead as well as lower in size and straight in the direction.

Generally, copper wire can be used as earthing lead but, copper strip is also used for high installation and it can handle the high fault current because of wider area than the copper wire.

To increase the safety factor of installation, two copper wires are used as earthing lead to connect the device metallic body to the earth electrode or earth plate. I.e. if we use two earth electrodes or earth plats, there would be four earthing leads. It should not be considered that the two earth leads are used as parallel paths to flow the fault currents but both paths should work properly to carry the fault current because it is important for better safety. 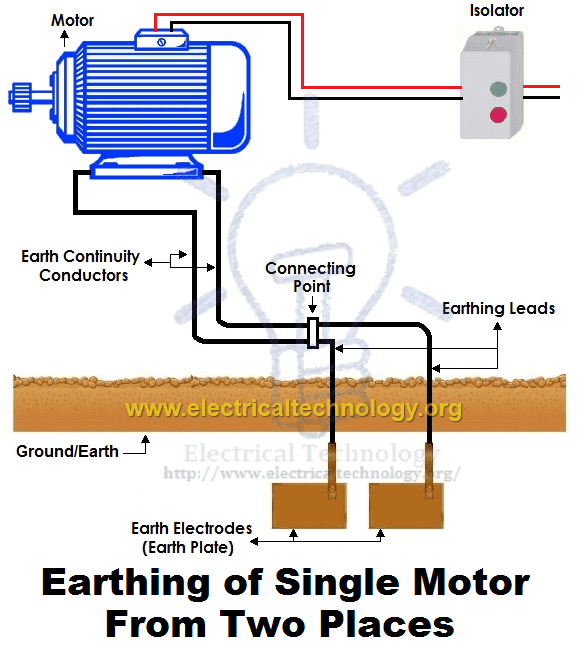 Size of the Earthing Lead

The size or area of earthing lead should not be less than the half of the thickest wire used in the installation.

The largest size for earthing lead is 3SWG and the minimum size should not be less than 8SWG. If 37/.083 wire is used or the load current is 200A from the supply voltage, then it is recommended to use copper strip instead of double earthing lead. The earth lead connection methods is shown in the above fig.

A metallic plate, pipe or rode can be used as an earth electrode which has very low resistance and carry the fault current safely towards ground (earth). 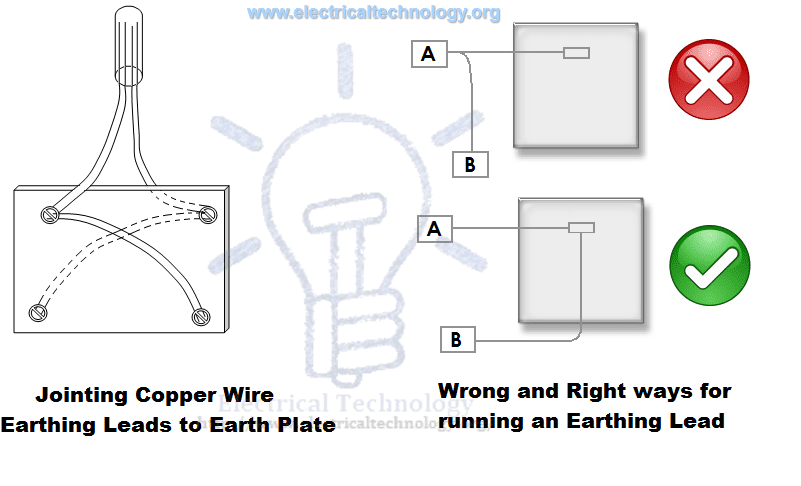 Both copper and iron can be used as earthing electrode.

The size of earth electrode (In case of copper)

In case of Iron

It is recommended to bury the earth electrode in the moisture earth. If it is not possible, then put water in the GI (Galvanized Iron) pipe to make possible the moisture condition.

This action makes the possible increase in the size of the earth electrode which leads a better continuity in the earth (earthing system) and also helps to maintain the moisture condition around earth plate.

Don’t use coke (after burning coal in the furnace to emit all the gases and other components, the remaining 88% carbon is called coke) or stone coal instead of charcoal (wood coal) because it causes to corrosion in the earth plate.

In small installation, use metallic rod (diameter = 25mm (1inch) and length = 2m (6ft) instead of earth plate for earthing system. The metallic pipe should be 2 meter below from the surface of ground. To maintain the moister condition, put 25mm (1inch) coal and lime mixture around the earth plate.

For effectiveness and convenience, you may use the copper rods 12.5mm (0.5 inch) to 25mm (1 inch) diameter and 4m (12ft) length. We will discuss the installation method of rod earthing latter.

Methods and Types of Electrical Earthing

Earthing can be done in many ways. The various methods employed in earthing (in house wiring or factory and other connected electrical equipment and machines) are discussed as follows.

For proper earthing system, follow the above mentioned steps in the (Earth Plate introduction) to maintain the moisture condition around the earth electrode or earth plate. 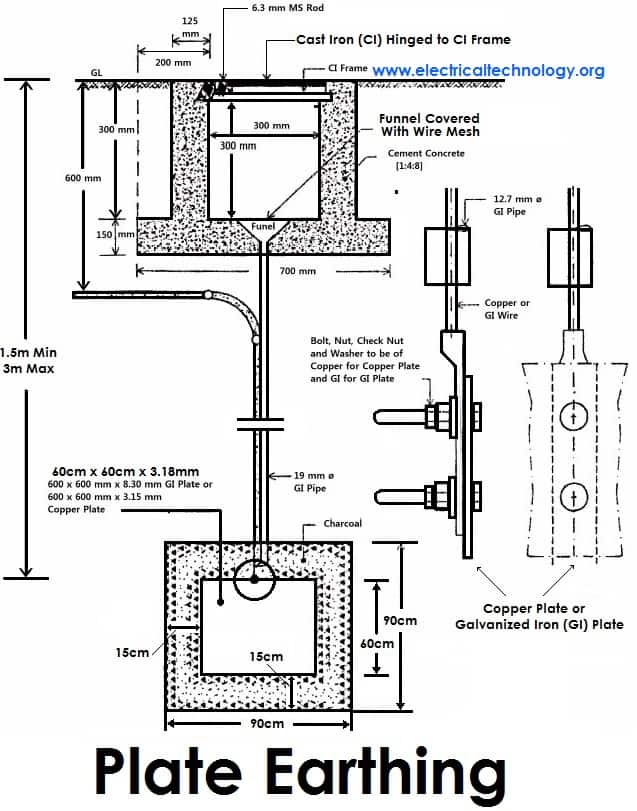 The size of pipe to use depends on the magnitude of current and the type of soil. The dimension of the pipe is usually 40mm (1.5in) in diameter and 2.75m (9ft) in length for ordinary soil or greater for dry and rocky soil. The moisture of the soil will determine the length of the pipe to be buried but usually it should be 4.75m (15.5ft). 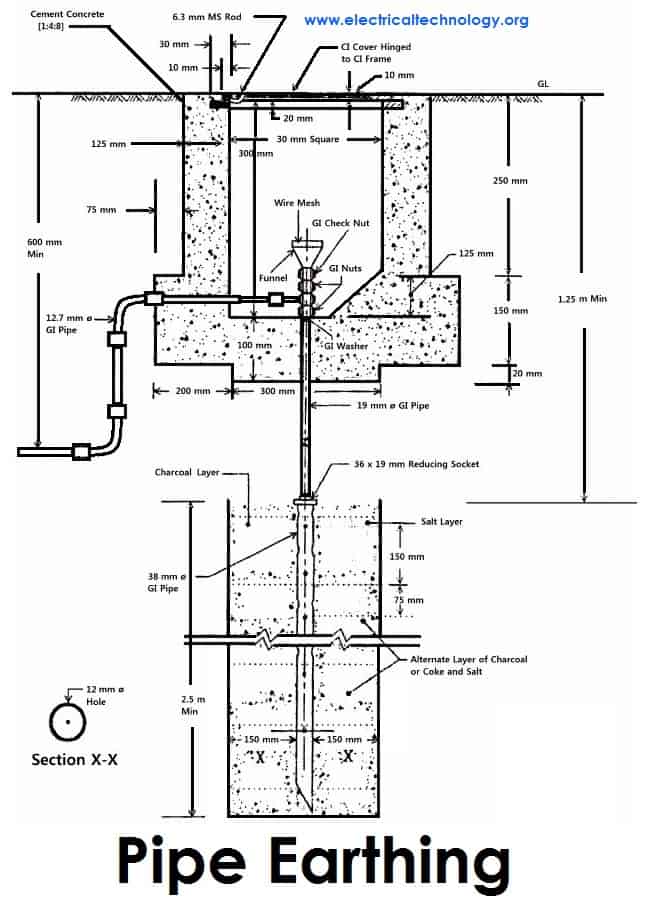 it is the same method as pipe earthing. A copper rod of 12.5mm (1/2 inch) diameter or 16mm (0.6in) diameter of galvanized steel or hollow section 25mm (1inch) of GI pipe of length above 2.5m (8.2 ft) are buried upright in the earth manually or with the help of a pneumatic hammer. The length of embedded electrodes in the soil reduces earth resistance to a desired value.

Earthing through the Waterman

In this method of earthing, the waterman (Galvanized GI) pipes are used for earthing purpose. Make sure to check the resistance of GI pipes and use earthing clamps to minimize the resistance for proper earthing connection.

If stranded conductor is used as earth wire, then clean the end of the strands of the wire and make sure it is in the straight and parallel position which is possible then to connect tightly to the waterman pipe.

If at all round conductors are used, their cross-section area should not be too small, say less than 6.0mm2 if it’s a galvanized iron or steel. The length of the conductor buried in the ground would give a sufficient earth resistance and this length should not be less than 15m.

The usual method of earthing of electric equipments, devices and appliances are as follow:

Various specifications in respect to earthing as recommended by Indian Standards are given below. Here are few;

Dangers Of Not Earthing A Supply System

As emphasized on earlier, earthing is provided in order

However, if excessive current is not earthed, appliances will be damaged without the help of fuse in place. You should note that excessive current are earthed at their generating stations which is why earth wires carries very little or no current at all. It therefore implies that it is not necessary to earth any of the wires (live, earth and neutral wires) contained in a PVC. Earthing the live wire is catastrophic.

I have seen a person killed simply because a live wire got cut from overhead pole and fell to the ground while the ground was wet. Excessive current is earthed at generating stations and if at all the earthing is not efficient due to fault, earth fault interrupters will be there to help. Fuse help only when the power transmitted is above the rating of our appliances, it blocks the current from reaching our appliances by blowing off and protecting our appliances in the process.

In addition, if a live wire touches accidentally (in a faulty system) to the metallic part of a machine. Now, if a man touches that metallic part of the machine, then the current will flow through their body to the ground, hence, he will get shocked (electrocuted) which may lead to serious injuries even to death. That’s why earthing is so important?

Electrical Grounding & Earthing….. To be continued…

Types of ICs. Classification of Integrated Circuits and Their Limitation