What is the Difference between Earthing, Grounding and Bonding?

There is unusual confusion to understand the basic concept and  main difference among grounding, earthing and bonding even some professionals interchanged the word for earthing, grounding and bonding such as earthing bond, bonding ground etc. In addition, electrical bonding is a totally different thing other than grounding and earthing.

To the point, Grounding and Earthing is the same concept expressed by different terms used for them. There is a small difference between earthing and grounding which we will discuss in detail as follows. 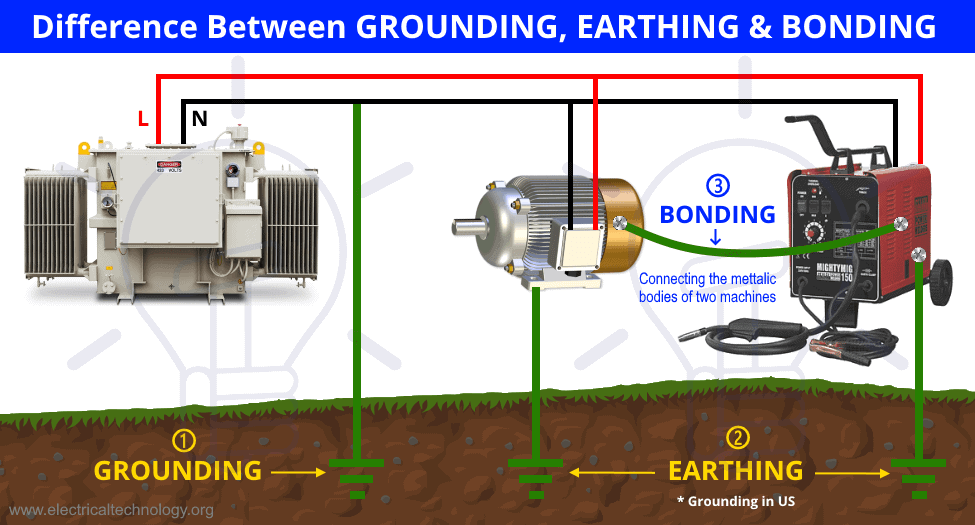 Now let’s discuss them one by one in detail.

Grounding is the connection between live parts of a machine (which carries current in normal operation) and earth such as the neutral of a generator or neutral point of a star connected power transformer. This grounding provides an effective path to the fault currents from the equipment to the power source which leads to protect the power system installations and devices.

Grounding is also used to balance the unbalance system. For example, all three phase (lines) become unbalanced when a fault occurs in the system hence, the grounding discharge the faulty current to the earth and make the system balanced once again having the total neutral current as “0” (it is not possible to gain this value in specific cases but it reduces to the almost ideal case i.e. nearest value).

Moreover, grounding provides protection against the surge voltage (lightning, line faults and surges) and discharges the over-voltage to the ground which makes the system stable and reliable with maximum transformer efficiency. 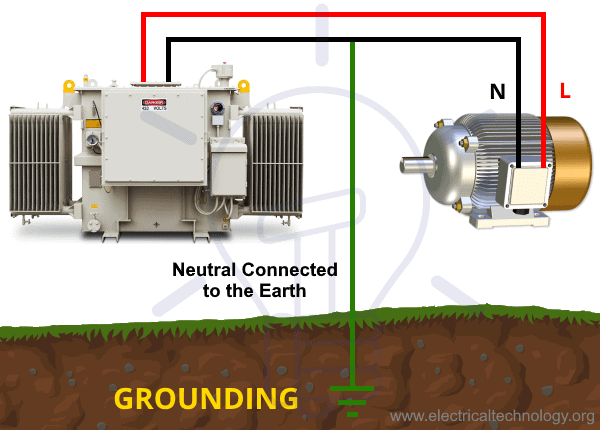 Earthing is the connection between the metallic (conductive) parts (such as body frame, metallic enclosure which in non current carrying during normal operation) of an electric appliance or installation and earth (ground). Electrical Earthing is also known as Grounding in the US.

If the live (phase, hot or line) wire touches to the metallic body frame of a machine or panel box enclosure and someone comes in contact (by touching) the machine frame or metallic enclosure, he will get a tough electric shock (due to the high positional between ground and the body frame) even electrocution may occurs due to the fault current flowing through the victim body to the earth.

For this reason, a bare or green or green with yellow stripe wire is connected between the metallic body and earth electrodes (or earth plate buried in the ground) through the earth continuity conductor. This way, the fault current discharges to the ground, hence the earthing system protects the personal from the hazardous electric shock.

It is recommended both earthing (grounding in the US) and bonding between the external surfaces and metallic parts of the machines and ground for additional and perfect protection. Moreover, high voltages machines such as motors, transformers and generators should be earthed (grounded) twice i.e. from two different and separate locations (using separate earth conductors and earth electrode plates). 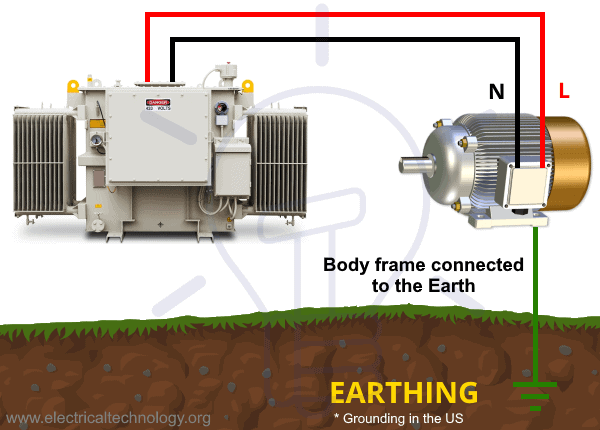 Bonding or electrical bonding is the process of connecting and permanently joining two electrical conductors, machines, pipes, devices and all the metallic parts in the power installations. In this process, all the  dead metallic parts (non-current carrying under normal condition) of the installations are connected through a conductor wire which equalize the intentional difference between them.

This way, a person is still protected (from getting electric shock) even if he touches the two (bonded) machines at the same time connected to the different sources. In other words, the bonding rod equalizes and makes sure the same electrical potential levels on the both surfaces. This way, there is no chance of current flow due to the lack of potential difference, hence the system and personnel is well protected.

For the reason mentioned above, a well bonding system connected to the earth is used to protect the persons, devices, equipment and other installations as the earthed bonding system makes sure all the connected devices are the same level of voltage, hence no chance for discharge & current flow.

Bonding ensures that these two things which are bonded will be at the same electrical potential. That means we would not get electricity building up in one equipment or between two different equipment. No current flow can take place between two bonded bodies because they have the same potential.

If a single machine or panel box is properly earthed (grounded) and bonded to another box, there will be no chances of current flow due to the zero (grounded) potential between the bonded boxes or machines.

Bonding itself won’t protect, but provides the low impedance return path to the power source. This way, a high amount of current will start to flow which leads to trip the protective circuit breaker and eliminate the fault.

Bonding is necessary due to the following two safety related reasons..

The properly bonded as well as grounded (earthed) system provide protection against both the above mentioned scenarios.

Main Difference Between Grounding and Earthing

Both grounding and earthing are almost the same thing i.e. connecting an electrical device to the ground (earth plate or earth electrode though continuity coadjutor or protective rod). This system provides a must have reference voltage in the circuit, to protect the installations for lightning strikes, and discharge the fault current to the earth hence the system protects the lives.

For non US residents, there is a small (almost negligible) difference between the ground and earth as follows.

Related Post: The purpose of Earth or Ground wire in overhead Transmission lines.

Comparison Between Earthing, Grounding and Bonding

The following table shows the comparison and differences between bonding, earthing and grounding.

What Happens to the Battery with Reverse Polarity Wiring Connection