How to Program a PIC18 Microcontroller in C. Step by Step Tutorial (Pictorial Views)

How to Program a Microcontroller?

In this tutorial, we will program or write a simple code for PIC18 microcontroller in C where “C” is a widely-used computer language and it happens to be the only supported language (aside from assembly) at this time for 8-bit and 16-bit PIC microcontrollers. 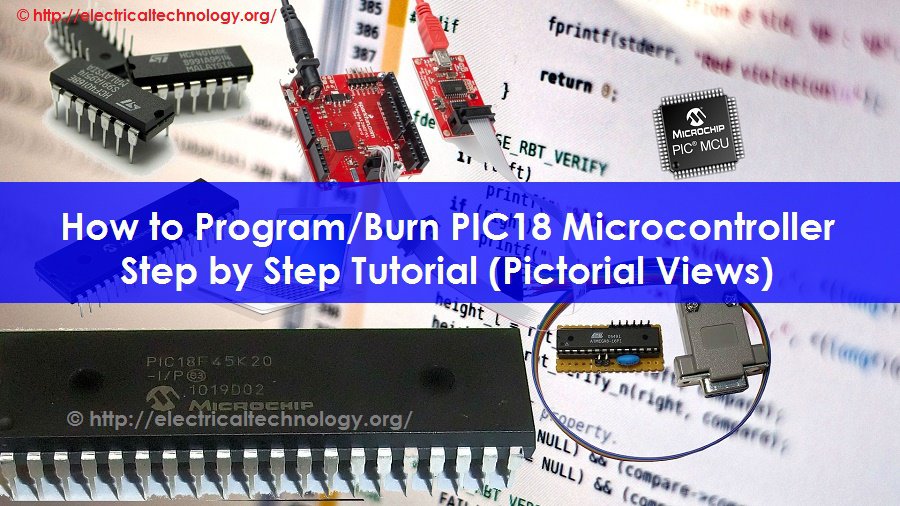 How to burn a coded program to the microcontroller?

Introduction of the Target Controller:

This Controller can also have modules for communication with other hardware like RS232 Module, I2C Module, 1wire Module and Parallel Slave port. This Microcontroller is the aesthetically engineered device and suitable for beginner, hobbyist as well as professional for mini and complicated electronics projects.

Introduction of the Programming Environment:

The programming environment we are going to use is MikroC for PIC. This IDE is fully equipped with a range of built in libraries and easy to use interface. This integrated development environment is packed with many calculators like hex to binary and decimal conversion which helps a lot in programming.

This Software size is also very small as compared to other software so it is easy to use and install. The Syntax of this software is a little Bit different then MPLAB Software but being a designer, I will suggest all the reader to use MikroC instead of MPLB because of it really easy to read syntax and lots of built in libraries to use.

It will definitely reduce the programming time and you don’t have to build the common functions from scratch like delay, LCD read and writes, RS232 Protocol and lots of others.

Note that MikroC is not a free software while Microchip’s MPLAB X IDE and XC8 compiler are free and offers many free libraries.

Let’s start with an example.

Note: it is considered that you have downloaded and installed the MikroC Programming Software and we are going to Program it in C and you have initial knowledge of C programming as well.

Double click the MikroC icon on your Desktop or where you have installed that software (as shown below).

After the software is loaded you will see this window. 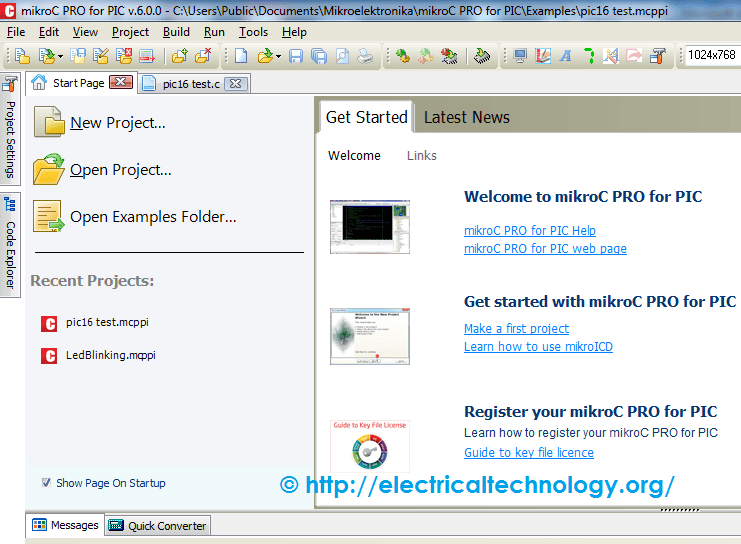 Step 2:
Now go to the Project button on the upper right corner and click the “Project”. 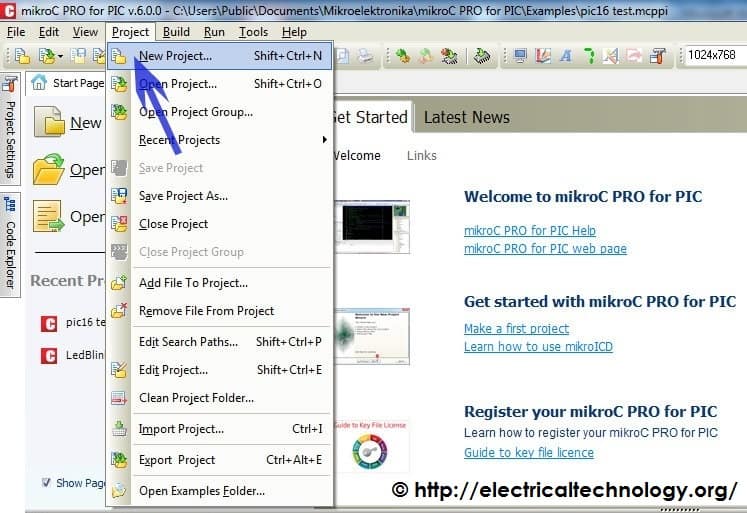 Now click on “Now Project” and the new below window will appear. 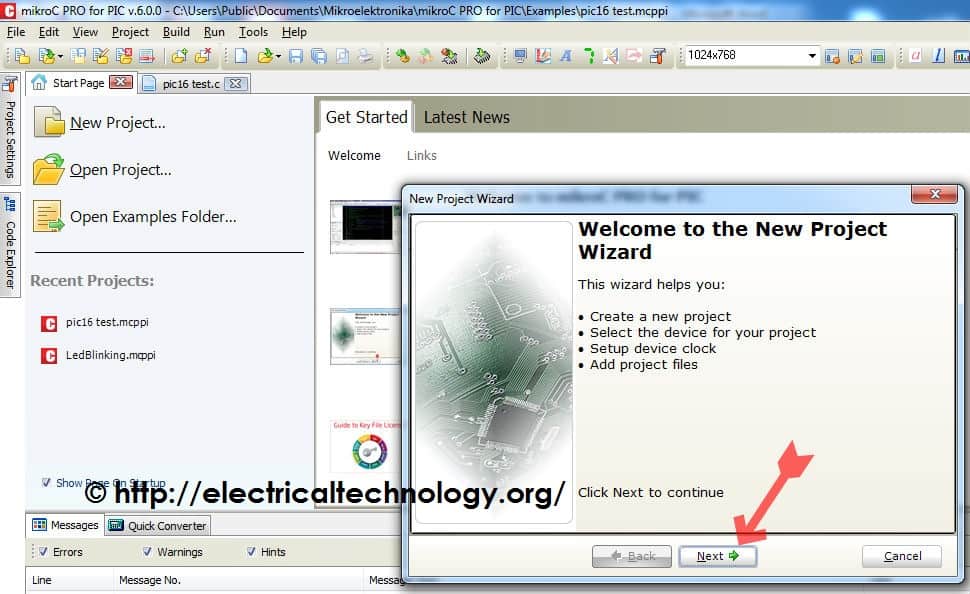 Now click next and select your target MCU Clock speed and project name and directory where you want to save it.

After that, don’t pay attention to the rest of the windows and just click next on all the remaining windows which appear.
Now the below window will appear. This is your programming Environment on this window you have to write code and compile it.

Now you have setup the software. Next step is writing code.

PIC18f452 comes with 5 ports. Four ports are 8 bits and one port is 4 bits in this tutorial we are going to use 8 bits port. There are few things you have to keep in mind while writing code for PIC18. (Code is given below)

Making a port as input or output:

Each port has TRISX Register which defines that you are using this port for the input or for output. Where X can be, A, B, C, D, E, F e.g. TRISB.

For output you have to put 0x00 in TRISB and for input you have to put 0xFF in it. but this is not always the case because Each pin can be independently selected as an input or output. you could write 0x09 to TRISB which would select RB0 and RB3 for inputs and the rest of the pins for outputs.

In mikroC I have selected the delay library so I don’t have to create the delay functions here I can simply use Delay_ms() function. In this function you have to give how many mili seconds delay you want like if you want 1000 mili second delay you can write it like Delay_ms(1000). 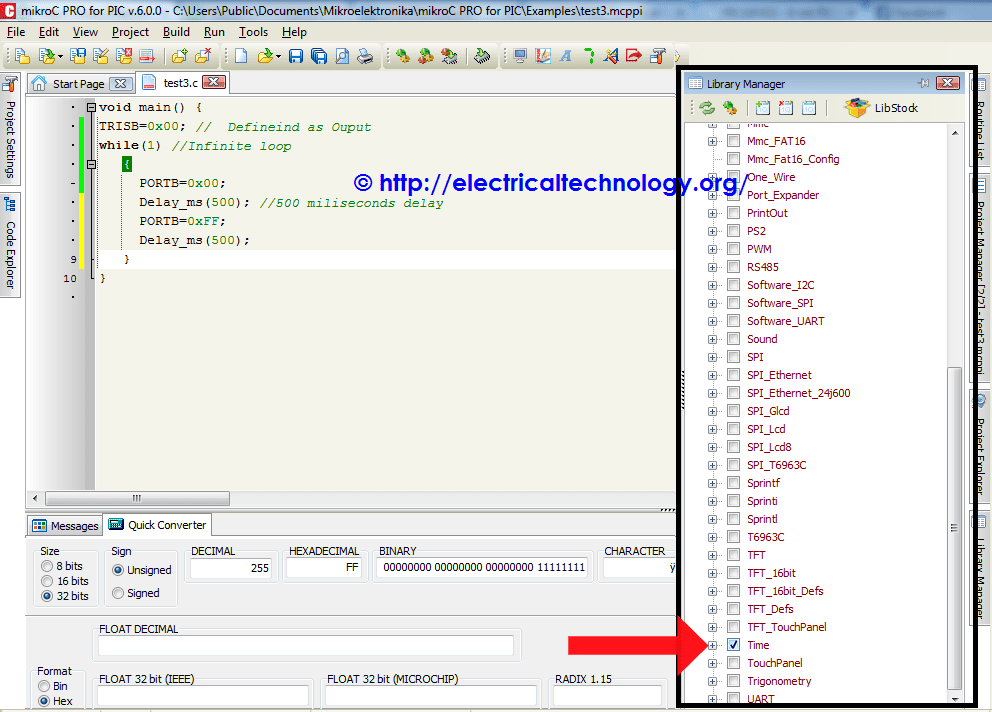 Her e is the First simple toggle PORT bits Code.

When you write this code after that you have to compile it.

Click on this “build all “button code will be compiled and hex will be created in the folder in which you have saved your project file.

Once the hex is created you can burn this hex in your PIC18f452 by using PICKIT hardware or you can test it by using proteus.

That’s all about this first tutorial; stay tuned for upcoming posts about the topic.

PCB Designing: How To Design a PCB (Step by Step & Pictorial Views)