Different Types of Microcontrollers and their Applications

What is a Microcontroller?

A microcontroller is a semiconductor IC (integrated circuit) chip consists of multiple functional block such as CPU, ROM, RAM, Timer, Counter & interrupts etc. It is essentially a small computer with all peripheral inside a single package. 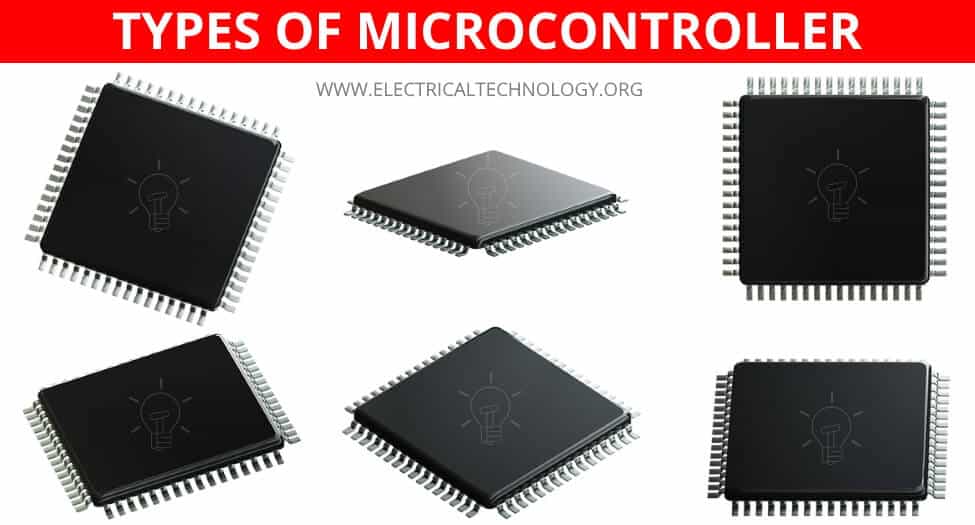 Different types of microcontrollers are being used for automatic control of industries, automobiles, electronic medical devices, appliance & many other embedded systems. They are mostly preferred due to their compact size, low power consumption & low cost.

The microcontrollers are classified into different types on various basis: 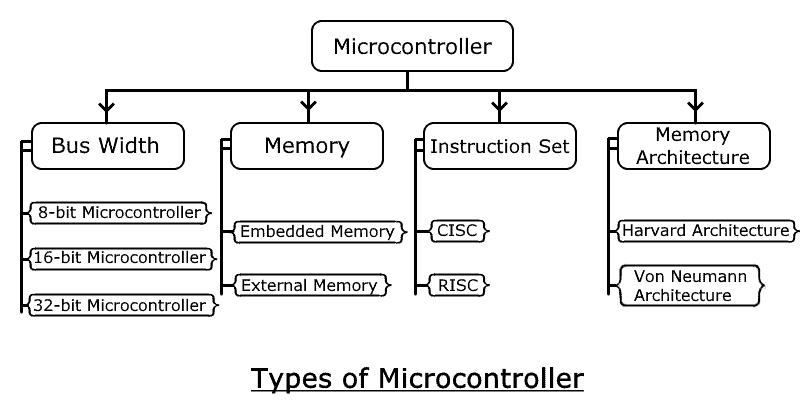 On the Basis of Bus-Width

The Bus in a microcontroller refers to the parallel lines of connection between various components of the microcontroller. It transmits the instructions & data between the CPU, Memory & input/output ports. There are three types of buses inside a microcontroller; data bus, address bus, control bus. 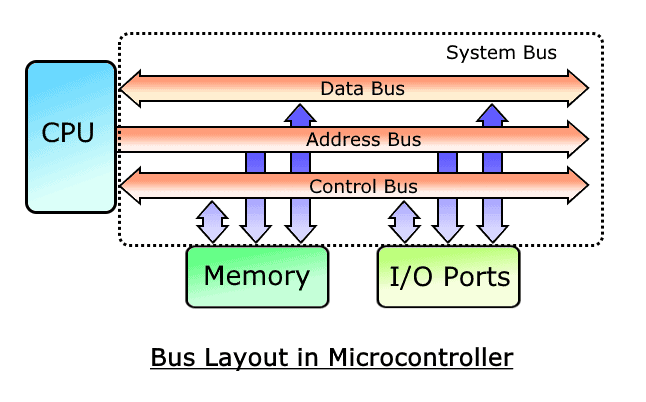 The bus width of such microcontrollers is 8 bit (1 byte) wide long. It means it can transfer & process the data of 8 bits in a single cycle. The main hindrance it poses is in the mathematical operations because its ALU (arithmetic logic unit) is also 8-bit. In order to process a large data of for example 16 bit, it uses multiple cycles to complete a simple mathematical function. It results in a poor performance of the overall logic circuit.

Another key feature of 8bit microcontroller is its Timer.  An 8-bit timer has a maximum range of 0x00 (0) to 0xFF (255). It can cause inaccuracy in generating time delay functions.

The bus width of such microcontroller is 16 bit (2 byte) wide. It can transfer & process a data of 16 bits in a single cycle. Its 16-bit ALU is more efficient in performance comparing to 8-bit microcontroller. And its 16-bit timer provides a wide range of 0x0000 (0) to 0xFFFF (65535) which provides the best accuracy per cost for any application or projects that require Timer functions.

Its higher processing speed makes it the best candidate for performing a complex tasks such as audio & video signal processing, Image processing, etc. It can also support multiple peripheral required in any embedded system projects or applications such as Ethernet, Universal Serial Bus (USB), Universal Asynchronous Receiver-Transmitter devices (UARTS), and a Controller Area Network (CAN) bus.

On the Basis of Memory

The microcontroller is also classified into two types on the basis of essential memory blocks. 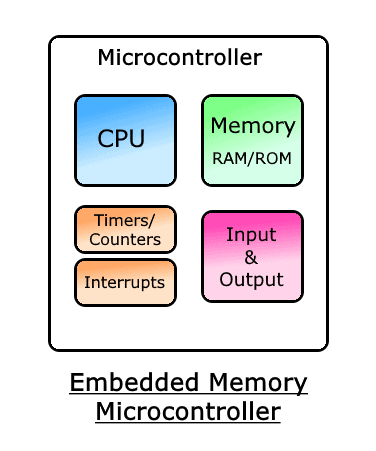 Such type of microcontroller has all the essential memory blocks or modules embedded inside a single package. Some of these functional blocks are program & data memory, Timers & counter, interrupts etc. These memory blocks are fixed & not expendables but a microcontroller having the feature of supporting external ROMs can extend its storage memory. These are compact in design. 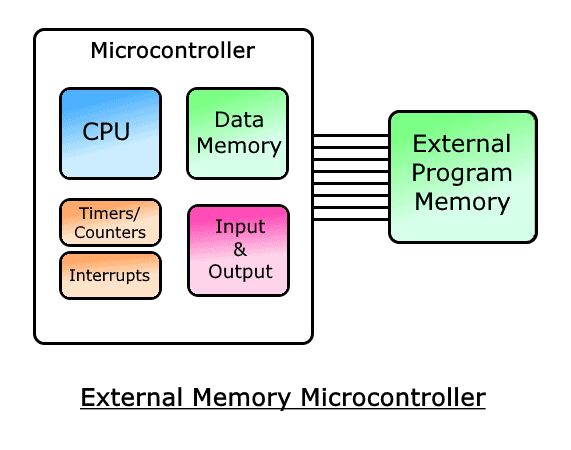 Such type of microcontroller does not have one of the essential memory blocks inside its chip & it needs to be connected externally to function properly. The use of external modules increases the size of the overall device.

On the Basis of Instruction Set Architecture

Here are some of the Examples of instruction in a microcontroller; read, write, copy/move, add, subtract, multiply, divide, increment, decrement, compare, call to address location etc.

According to the instruction set, the microcontrollers are classified into two types;

Such type of microcontroller’s CPU is designed to execute a single complex command. It can execute multiple instructions or steps using a single instruction. The advantage of CISC microcontroller is its small-sized program. But due to the large size of its instruction set with many addressing modes, it takes a multiple machine cycle to execute & causes longer time to perform. Another problem is the parallel execution of an instruction which is not possible in CISC.

This type of microcontroller’s CPU is designed to execute smaller simple instructions. Since it takes one machine cycle to execute a single instruction, the number of instructions can be reduced to execute a complex task with higher speed than a CISC. Its instruction set size is small & the program code written for such MCU’s are usually very lengthy & consists of many lines.

On the Basis of Microcontroller Architecture:

The Harvard architecture based microcontroller has physically separate memory storage for program code (instructions) & the data, known as the program memory & the data memory respectively. Thus, they have separate bus lines & can be accessed both at the same time. Therefore, the Harvard architecture based microcontroller can complete instruction in one machine cycle. 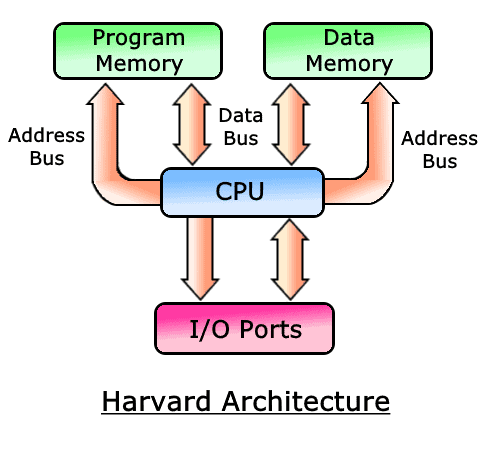 Due to the two physically separate bus lines, the complexity of the microcontroller design & the development cost increases. They are mostly used in modern microcontrollers & digital signal processing units.

Von Neumann or Princeton architecture suggests to use a single memory for both the program & data storage. This concept was proposed by a mathematician Von Neumann in 1945 & It is the most used architecture in all computers, desktop & laptops to date. 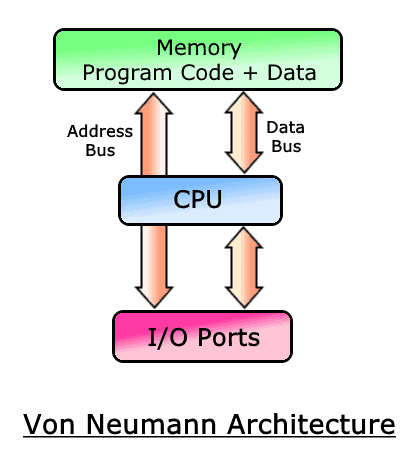 There is only one bus required for accessing data & fetching instructions. Thus, both operations cannot be done at the same time & they must be scheduled. This is why von Neumann architecture based microcontroller takes two machine cycles to complete an instruction. Since it uses a single bus system, its design is simple & production is very low compared to Harvard architecture.

PIC is an acronym for the peripheral interface controller & it is based on Harvard architecture. It is mainly used for the development of embedded electronics systems in vehicles, robotics, medical devices, vending machines, office machines & various other devices. It is a family of microcontrollers made by Microchip technology. It can be easily programmed through software using Assembly, C or Basic C language to complete a specific task. 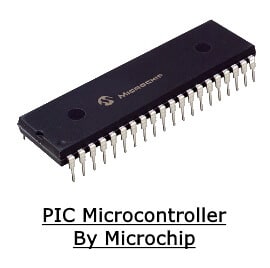 Most PICs have their internal oscillator of usually 8MHz or 16MHz. They are available in 8-bit, 16-bit & their latest models in a 32-bit wide data bus. The instructions set of PIC microcontrollers vary from 35 instructions in low-end MCUs to 80 instructions in high-end MCU. The program instruction set width can be 12, 14, 16 & 24 bit long. It varies by family & model of PIC microcontroller. They are available in both SMD (surface mount device) & DIP (dual inline package) packaging having a minimum 6 to maximum 144 pins.

Due to its low cost, low power consumption & high speed, they are used in almost every electronic device.

The most common type of PIC microcontroller is PIC16F877A. Following are some of the most prominent features of PIC16F877A; 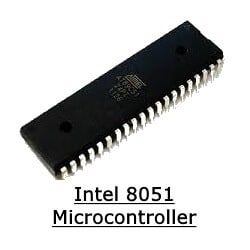 The 8051 is the most common & cheap microcontroller made by Intel corporation in 1981. It is based on CISC Harvard architecture for having separate programs & data memory. The most prominent features of 8051 microcontrollers include;

AVR stands for Alf and Vegard’s RISC Processor because it was first developed by Alf-Egil Bogen & Vegard Wollan, Norwegian students. It is a family of microcontroller developed by Atmel since 1996 & microchip since 2016.

It is based on modified Harvard architecture that offers separate storage space for program & data. AVR has a very high speed when compared with PIC or 8051 microcontroller.

The AVR microcontrollers are generally available in the following families;

The most common AVR microcontrollers belong to the MegaAVR family known as ATmega16, ATmega32 & ATmega64. The difference between these microcontrollers is their flash storage space of 16KB, 32Kb & 64KB identified by the last number in their name.

The common feature of AVR ATmega32 microcontrollers are;

ARM is an acronym for Advanced RISC Machine & it is a family of microprocessor core available in both Harvard & von Neumann based architecture. The Harvard architecture has separate buses for accessing the program (ROM) & Data (RAM) Memory while von Neumann architecture uses a single memory for both thus compromising the speed. Basically the ARM cores are microprocessors designed to be used in chips such as microcontrollers.

The ARM processor is based on RISC architecture which offers fast instruction execution. They are a popular choice for extensive use in consumer handheld electronic devices such as mobile phones, tablets, multimedia players, and other wearable devices.

There are different types of ARM processors specifically designed for various purposes;

Cortex-A: these processors are built for advanced operating systems and they offer the best performance;

Cortex-R: these processors have fast response time thus they are used for real-time applications.

Due to the availability of the largest range of memory capacity &  pin count, they are used in various advance automotive control embedded applications. The RL78 & RX family microcontrollers are most popular where the former is used for its low power consumption feature while the latter is famous for its high performance.

Some of the most prominent feature of RENESAS RL78 & RX family microcontrollers;

Microcontrollers can be used to complete any task by interfacing sensors, actuators, motors & appliances, etc. they are used in embedded systems based applications to control a specific task automatically. Following are some of the applications of microcontrollers;