What is Atmega Atmel AVR Microcontrollers ? 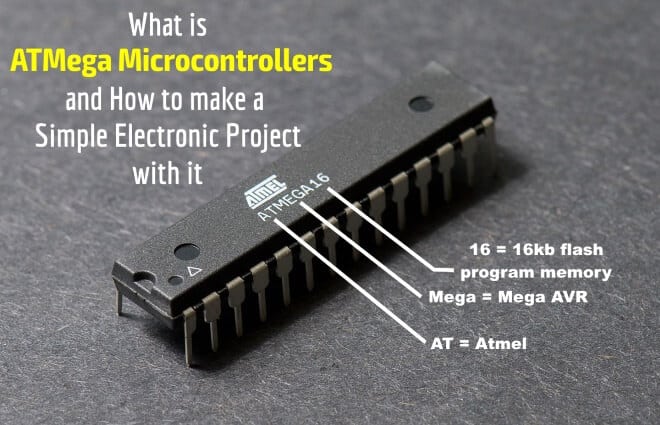 The ATMega microcontrollers were designed by two Norwegian Institute of Technology (NTH) students – Alf-Eigel Bogen and Vegard Wollan. It was later bought and developed by Atmel Corporation in 1996.

As mentioned in the introduction part, ATMega microcontrollers are based on Harvard architecture, i.e. separate data memory and program memory. The Program memory also known as Program or Code Memory is the Flash Random Access Memory (ROM). The size of program memory ranges from 8K to 128K Bytes.

The below diagram represents the architecture of ATMega microcontrollers. 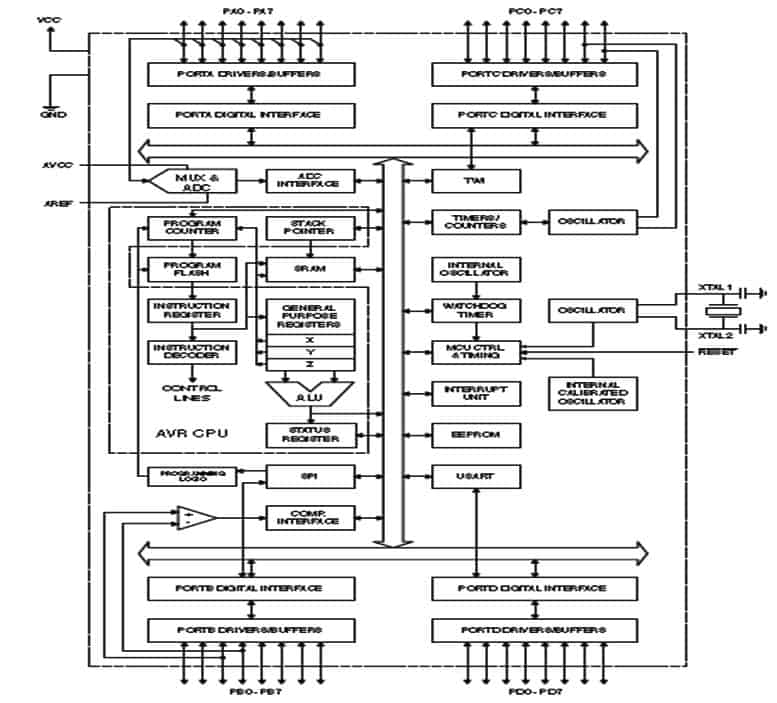 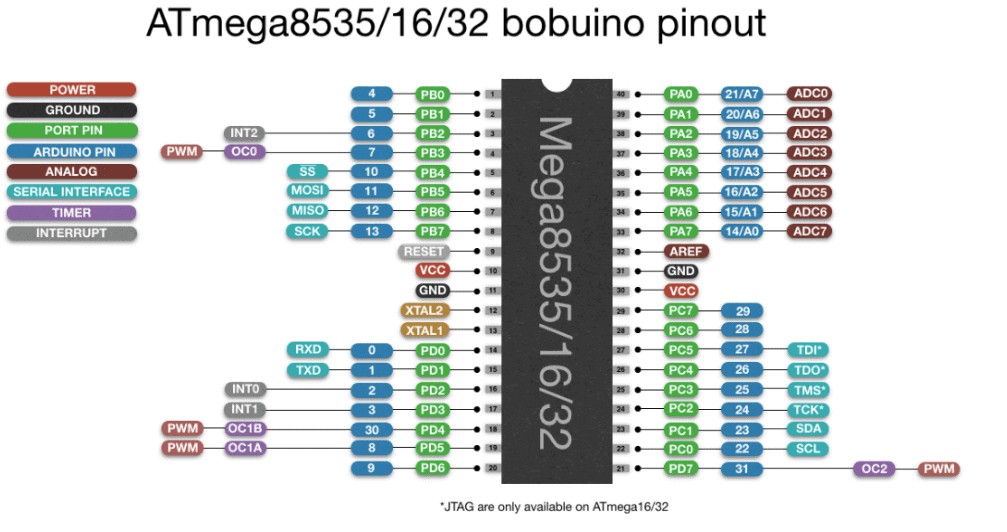 Let us have a brief overview about each and every module

1. General Purpose Registers: The ATMega microcontrollers have register based architecture, i.e. both the operands and the result of operations is stored in the registers, collocated with the Central Processing Unit (CPU). The general purpose registers are coupled to the processor’s Arithmetic Logic Unit (ALU).

These registers are used to store information temporarily while executing a program. These consume 32 Bytes of Data Memory space and takes the address location – $00 to $FF. These registers are nomenclature as R0 to R31 and are each 8-bit wide.

The number of locations occupied by this memory depends on the number of pins and peripheral functions supported by the chip. While 64 Bytes of I/O location is fixed for all chips, some ATMega microcontrollers have an extended I/O memory which contains registers related to the extra ports and peripherals.

4. Flash Electrically Erasable Programmable Memory (Flash EEPROM): This is an in-system programmable memory used to store the programs. It is erasable and programmable as a single unit. Since it is non-volatile, memory content is retained even in case of power off. For each ATMega microcontroller, the number at the end of the name denotes the capacity of flash memory.

5. Data Electrically Erasable Programmable Memory (Data EEPROM): Some This memory is used to store and recall permanent program data and other system parameters.

2. Clock: Microcontroller clock is used to provide time base to the peripheral sub systems. We can set clock internally by using the user-selectable Resistor Capacitor or externally using oscillators.

3. Timers and Counters: ATMega microcontrollers generally contain 3 timers/counters. While two 8-bit timers can also be used as counters, the third one is a 16-bit counter. These are used to generate precision output signals, count external events or measure parameters of input digital signal.

5. Interrupts: There are 21 interrupt peripherals in ATMega microcontrollers. While 3 are used for external sources, remaining 19 are used for internal sub-systems. These are used to interrupt normal sequence of events in case of high priority emergencies.

Let us have a brief discussion about assembly level programming.

An assembly language instruction consists of the following fields:

Here mnemonic refers to the instruction. ATMega microcontrollers support both immediate as well as indirect addressing modes. The I/O registers can be accessed through their respective locations in the memory space.

Operands refer to the arguments operated on by the instruction. For ATMega microcontrollers, the operands are the general purpose registers or the I/O registers.

I have written and compiled the code using Atmel Studio 7, which converts the .c file to binary ELF object file. It is then again converted to hex file, which is passed to the microcontroller using AVRdude program.

This is a brief information about ATMega microcontrollers. Any other related information is welcome in the comments below.