RS232 is one of the standard protocol in telecommunication which is used for serial communication of data. It is basically the process of connecting signals between data terminal equipment (DTE) for example, file server, routers and application servers, such as a modem.

The standard interprets electrical features and important timings of signal and the physical size and points of the connectors. The RS232 standard has been mostly utilized in computer ports. It involves two types of communication, serial and parallel. 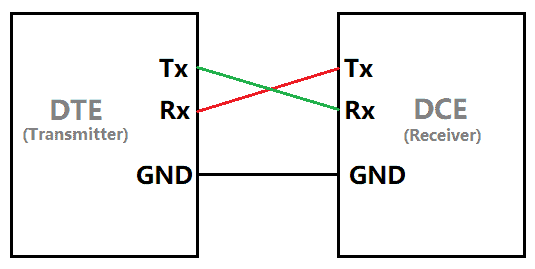 What is Serial Communication?

When data is transmitted bit by bit, from a transmitter to a receiver by various networking systems, it is known as Serial Communication. It is therefore a relatively slow process than Parallel Communication.

The electrical features refer to the specifications according to voltage levels, rate at which the signal alters and line resistance.

One of the most significant characteristics is the rate at which the signal level alters, which is called the Slew Rate. In RS232 the maximum slew rate is always kept up to 30V/ µs. Due to these limitations of standard, it helps in decreasing the cross talk with other signals.

The mechanical identifications of RS232 includes the mechanical alliance of the standard. The RS232 standard strongly implies to provide a 23 – pin and D – Type connector in order to support the entire functional utility of RS232.

There are three kinds of signals in RS232, i.e data, control and ground. These function according to their direction in communication, signal types and with a variation of pins.
With technological advances and devices getting smaller in size, there isn’t any space for huge connector like DB25, and most of applications doesn’t require the need of connecting all the 25 pins. Therefore, a much decreased function of 9-pin connector is in use mostly. It is known as DE -9 which is a D –Type subminiature connector. 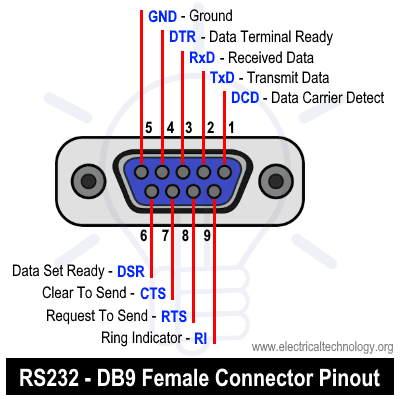 RS232 officially is known to be a complete standard that can define more than electrical and mechanical features. R232 standard has the abilities of defining functions of various signals used in the interface. The signals are known as: Common, Data, Timing and Control Signals.

The Procedural Specifications of RS232 talks specifically about the patterns of operations that are carried out when DTE and DCE wires are connected.

If a Router (DTE) is connected to a Modem (DCE) through RS232 interface. In order to send data from router to Modem, the following procedure must be used:-

In RS232 standard devices one wire transmits a changing voltage and other wire is connected to the ground as the wires has a single end. Noise induced by differences in ground voltages of driver and receiver circuit affects the Single-ended signals. The information or data in RS232 standard is serially transmitted only in one direction over a single data line. In order to incorporate a two way communication, three wires (RX, TX and GND) are needed along with the control signals. At any moment a byte of information can be passes given the fact, the previous byte of data has been transmitted already.

RS232 strictly follows asynchronous communication protocol i.e. there is no clock signal to synchronize the sender and receiver. Hence, it needs start and stop bits to inform the receiver when to check for data. There is a delay of certain time between the transmissions of each bit. This delay is an inactive state means the signal is set to -12 volts or logic “1” as mentioned earlier that logic 1 is -12 volts and logic 0 is 12 volts in RS232.

First, the transmitter i.e. the DTE sends a Start bit to the receiver i.e. the DCE to inform it that data transmission starts from next bit. We always keep Start bit as logic 0 or +12 volts and the next 5 to 9 characters are the data bits.

Going by the fact that RS232 is a complete standard, many manufacturers does not follow the standards. Some of them abide by the complete identifications while some only partly follow the specifications.

This is because this variation in implementation of the RS232 standard is that not all devices and applications require the full specifications and functionality of the RS232 Protocol. For instance, a serial model which is using a RS2323 may require more control lines than a serial mouse using the serial port.

The process of transmitting and receiving which uses different identifications altogether is backed up by another process called the Handshaking.

Handshaking is a process that actively places the parameters of a communication between the transmitter and receiver before communication beginning. The requirement of handshaking is dependent on the speed of the transmitter at which it sends the data to the receiver and the speed at which the receiver receives it. In case of asynchronous data transmission system, there can also be no requirement of handshaking.

In few transmissions where handshaking is not used, the receiver (DCE) should read the data that is already received by it before the transmitter (DTE) sends the next data. The receiver needs to use a special memory location called Buffer, as it is used at the end of the receiver it is known as Receiver Buffer.

The received data gets stored in the buffer before it is read by the receiver. The Receiver Buffer can usually store a single bit of data and this data must be read before the next data arrives and if it is not cleared, the present data will be overwritten along with the new data. 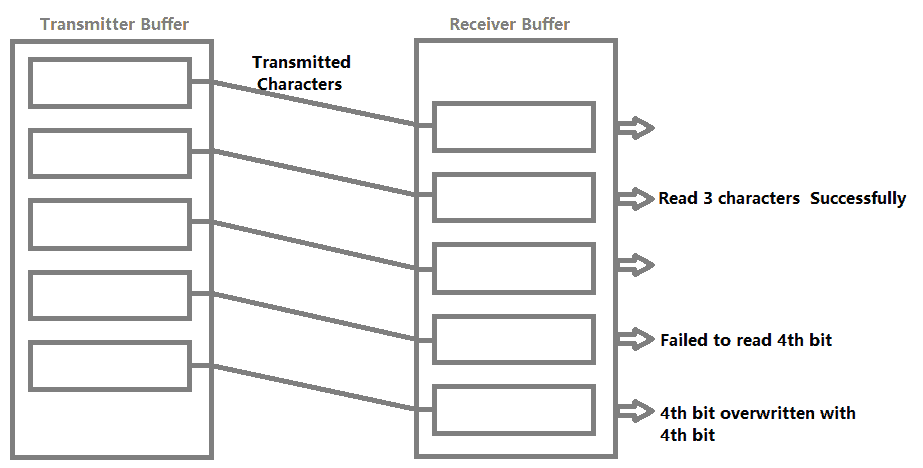 The RS232 Protocol refers to four signals for the use of Handshaking:

Software Handshaking in RS232 needs two characters to start and end the communication. These characters are known as X-ON and X-OFF (Transmitter On and Transmitter OFF).

When the receiver sends an X-OFF signal, the transmitter stops sending the data. The transmitter will only send data after receiving the X-ON signal. 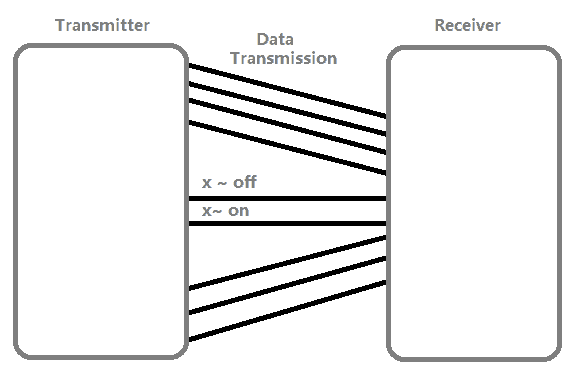 The voltage levels of RS232 are very different from most of the systems designed in the recent times. Therefore, we require a level converter of some kind to implement RS232 interface. This implementation is done by dedicated level converter IC MAX232 by Maxim Integrated. These ICs takes in the RS232 signals and give out a TTL level voltages. These ICs also invert the signals as low voltage levels in RS232. For the process of serial communication Universal Asynchronous Receiver and Transmitter (UART) send and receive signals and further the signal is converted by RS232 driver between TTL and RS232 interface.

The entire system of communication mentioned in this example is of asynchronous type and it requires start, stop and parity bits which are also called as synchronization bits. The UART in the example is responsible for generating the Start, Stop and Parity bits when it transmits the data and also detects errors while receiving data.

In case of a computer and modem, the Computer and Modem communicate with each other using the RS232 interface and the communication between the modems is established using other telecommunication links.