Key Difference Between 8085 and 8086 Microprocessor

Before going any further into their differences, let’s discuss the basics of a microprocessor and also 8085 & 8086 microprocessors. 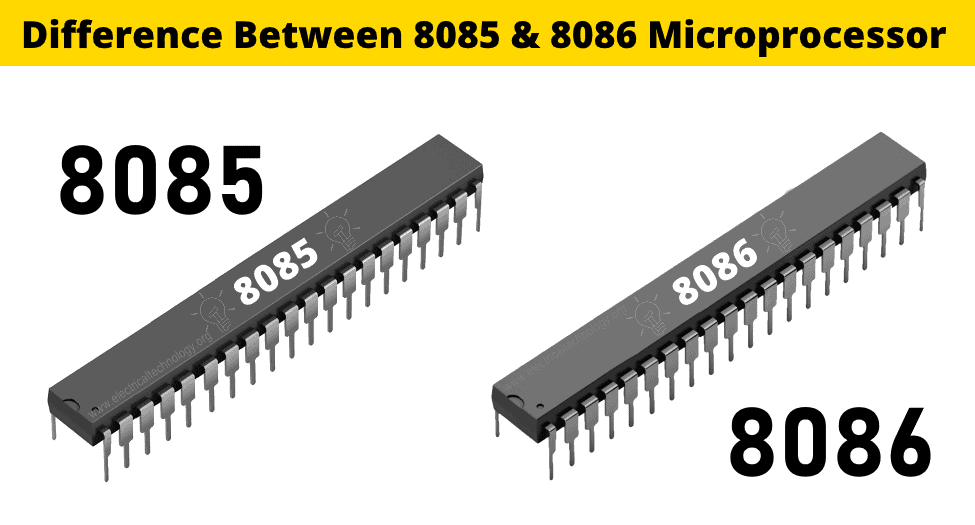 What is a Microprocessor?

A microprocessor is an electronic chip that functions as a central processing unit or the brain of a computer or microcontroller. It is made up of millions of transistors, diodes and resistors and it is responsible for any arithmetic or logical operation. The microprocessors operate on binary data in the form of “0” & “1”.

The microprocessors do not have RAM or ROM inside it. But they do have registers to stores the results from the ALU (Arithmetic Logic Unit). It includes interfaces to connect the external ROM and RAM to the processors.

There are different types of Microprocessors classified based on various features. Please refer to the article types of microprocessor for more information.

The 8085 pronounced as “Eighty-Eighty-five” is an 8-bit microprocessor first introduced by Intel in the year 1976. Its data bus is 8-bit long which means it can process 8-bit of data at a time. Its address bus is 16-bit wide which means it can access 216 different memory locations. Since each memory location contains a byte (8-bit) of data, the maximum accessible memory capacity of 8085 becomes 216 or 64KB. It is equipped with an on-chip internal oscillator of 3 MHz.

The reason it has an 8-bit data bus is that it has an 8-bit ALU (Arithmetic Logic Unit). Its ALU is capable of the operations such as, add, subtract, increase, decrease, compare, shift, complement, ADD, OR, X-OR.

The 8085 performs sequential execution of the instruction in this order; fetching, decoding and execution. It does not support pipelining.

The 8086 is a 16-bit microprocessor introduced by Intel in 1976. It is the enhanced version of the 8085 microprocessor. It has a 16-bit data bus with a 16 bit ALU. The address bus is 20-bit long; therefore the accessible memory capacity of 8086 microprocessor is 220 Bytes or 1MB. it is available in various versions with a clock frequency of 5 MHz, 8 MHz and 10 MHz.

It has a 16-bit ALU capable of performing all the operations of 8085’s ALU and also the operation of Multiplication and Division.

It is a general-purpose register-based microprocessor. It uses registers to stores the data being used and the results and the intermediate results from the ALU. There are 14 internal registers each 16-bit wide.

The internal architecture of the 8086 is divided into two parts that operate independently; The Bus Interface Unit (BIU) and Execution Unit (EU). The BIU is used for interfacing external components, fetching instruction and maintaining prefetch instruction queues also known as pipelining. It helps in increasing the execution speed of the instruction by fetching the next instruction while executing the current instructions. The EU contains ALU and registers that fetch the instruction from BIU, decode it and execute it.

The 8086 memory is segmented i.e. the 20-bit address bus can access 1MB of memory but it only uses the four 64KB segments from it. This increases the execution speed of the processor by providing different segments for different operations.

Mai Differences between 8085 and 8086 Microprocessor

There are some advantages of 8086 over 8085 e.g. more memory, faster clock speeds, backward compatibility, sort of better math etc. some of them are as follows:

The 8086 is a more advanced, efficient and fast operating microprocessor then 8085 but it is also more expensive. However, the selection between 8085 and 8086 microprocessor depends on the application they are being used for. You do not need an expensive, fast processor for a simple task that can be efficiently done using a cheaper microprocessor.

Difference Between CPU and GPU - Comparison

Difference Between Serial and Parallel Communication