PID Controllers – What are they and How Do they Work?

PID Controller is a most common control algorithm used in industrial automation and applications and more than 95% of the industrial controllers are of PID type. PID controllers are used for more precise and accurate control of various parameters.

Most often these are used for the regulation of temperature, pressure, speed, flow and other process variables. Due to robust performance and functional simplicity, these have been accepted by enormous industrial applications where a more precise control is the foremost requirement. Let’s see how the PID controller works? 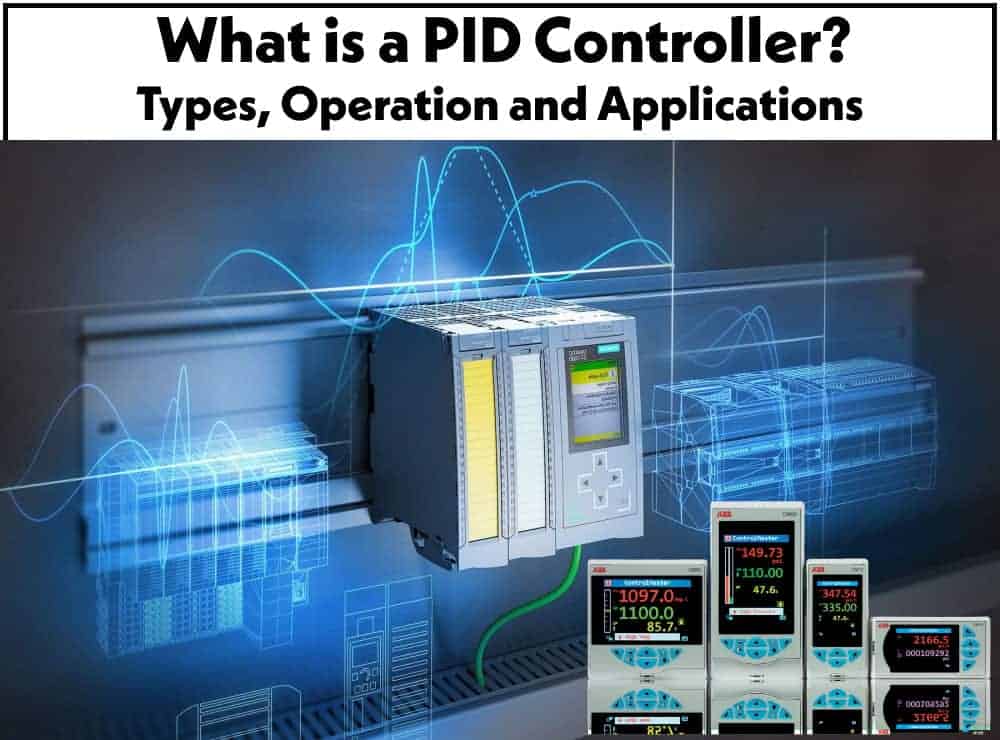 What is a PID Controller?

A combination of proportional, integral and derivative actions is more commonly referred as PID action and hence the name, PID (Proportional-Integral-Derivative) controller. These three basic coefficients are varied in each PID controller for specific application in order to get optimal response.

It gets the input parameter from the sensor which is referred as actual process variable. It also accepts the desired actuator output, which is referred as set variable, and then it calculates and combines the proportional, integral and derivative responses to compute the output for the actuator.

This deviation of actual value from the desired value in the PID control algorithm causes to produce the output to the actuator (here it is a heater) depending on the combination of proportional, integral and derivative responses. So the PID controller continuously varies the output to the actuator till the process variable settle down to the set value. This is also called as closed loop feedback control system.

In manual control, the operator may periodically read the process variable (that has to be controlled such as temperature, flow, speed, etc.) and adjust the control variable (which is to be manipulated in order to bring control variable to prescribed limits such as a heating element, flow valves, motor input, etc.). On the other hand, in automatic control, measurement and adjustment are made automatically on a continuous basis. 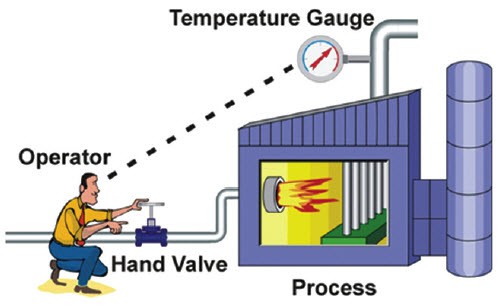 In case of ON-OFF controller, two states are possible to control the manipulated variable, i.e., either fully ON (when process variable is below the set point) or Fully OFF (when process variable is above the set point). So the output will be of oscillating in nature. In order to achieve the precise control, most industries use the PID controller (or PI or PD depends on the application). Let us look at these control actions.

For example, the magnitude of the error is 20 and Kc is 4 then proportional response will be 80. If the error value is zero, controller output or response will be zero. The speed of the response (transient response) is increased by increasing the value of proportional gain Kc. However, if Kc is increased beyond the normal range, process variable starts oscillating at a higher rate and it will cause instability of the system. 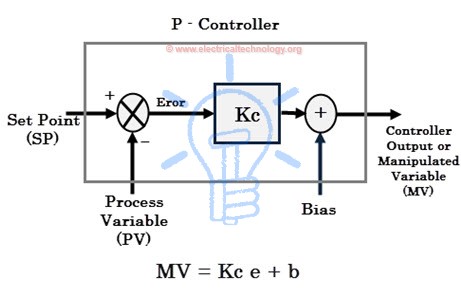 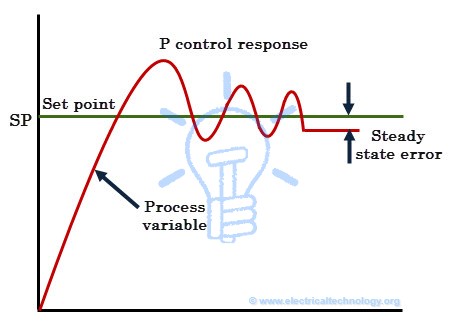 Although P-controller provides stability of the process variable with good speed of response, there will always be an error between the set point and actual process variable. Most of the cases, this controller is provided with manual reset or biasing in order to reduce the error when used alone. However, zero error state cannot be achieved by this controller. Hence there will always be a steady state error in the p-controller response as shown in figure. 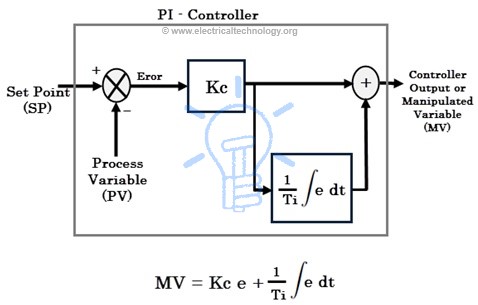 For many applications, proportional and integral controls are combined to achieve good speed of response (in case of P controller) and better steady state response (in case of I controller). Most often PI controllers are used in industrial operation in order to improve transient as well as steady state responses. The responses of only I-control, only p-control and PI control are shown in below figure. 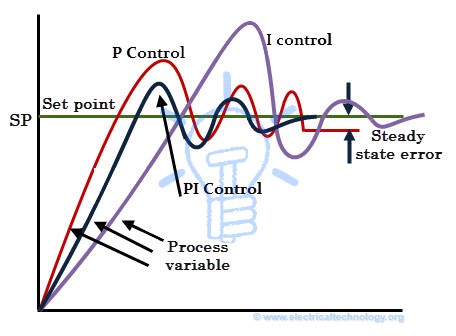 In such case, D-controller moves the final control device (such as control valves or motor) in such direction as to counteract the rapid change of a process variable. It is to be noted that D-controller alone cannot be used for any control applications.

The derivative action increases the speed of the response because it gives a kick start for the output, thus anticipates the future behavior of the error. The more rapidly D-controller responds to the changes in the process variable, if the derivative term is large (which is achieved by increasing the derivative constant or time Td).

In most of the PID controllers, D-control response depends only on process variable, rather than error. This avoids spikes in the output (or sudden increase of output) in case of sudden set point change by the operator. And also most control systems use less derivative time td, as the derivative response is very sensitive to the noise in the process variable which leads to produce extremely high output even for a small amount of noise. 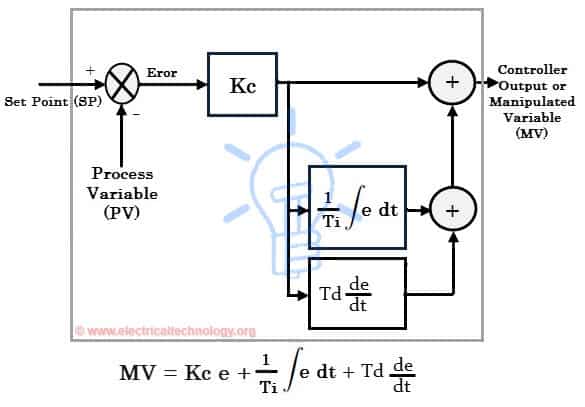 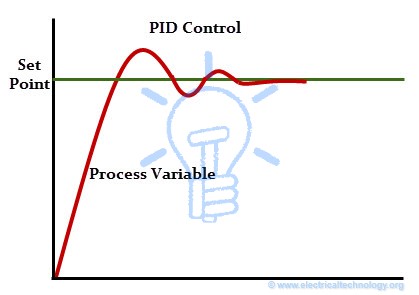 There are different types PID controllers available in today’s market, which can be used for all industrial control needs such as level, flow, temperature and pressure. When deciding on controlling such parameters for a process using PID, options include use either PLC or standalone PID controller.

Standalone PID controllers are used where one or two loops are needed to be monitored and controlled or in the situations where it difficult to access with larger systems. These dedicated control devices offer a variety of options for single and dual loop control. Standalone PID controllers offer multiple set point configurations and also generates the independent multiple alarms. 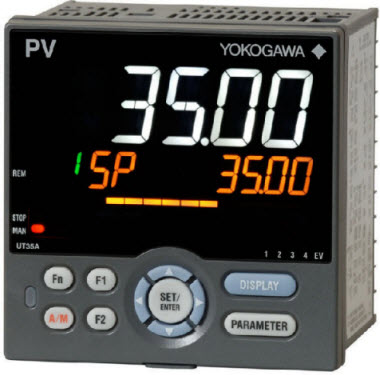 Most of the control applications, PLCs are used as PID controllers. PID blocks are inbuilt in PLCs/PACs and which offers advanced options for a precise control. PLCs are more intelligent and powerful than standalone controllers and make the job easier. Every PLC consist the PID block in their programming software, whether it can Siemens, ABB, AB, Delta, Emersion, or Yokogava PLC.

The figure below shows the Allen Bradley (AB) PID block and its setup window. 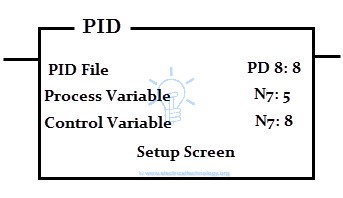 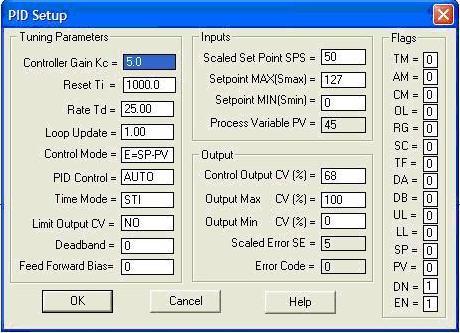 The figure below shows the Siemens PID block.

What is LabVIEW and How to make basic Electrical Projects in LabVIEW?

What is AC Drive? Working & Types of Electrical Drives & VFD