What is Analog To Digital Converter (ADC)? Block Diagram, Factors & Applications Of ADC

What is ADC (Analog To Digital Converter)?

ADC stands for analog to digital converter. It is an electronic device used for converting an analog signal into a digital signal. 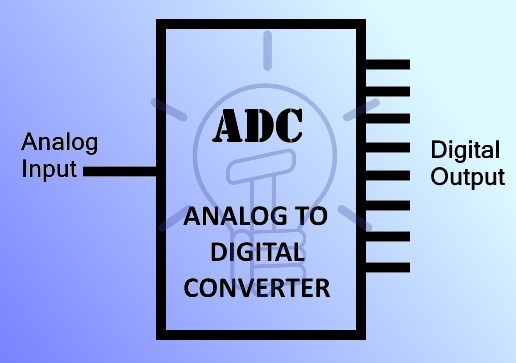 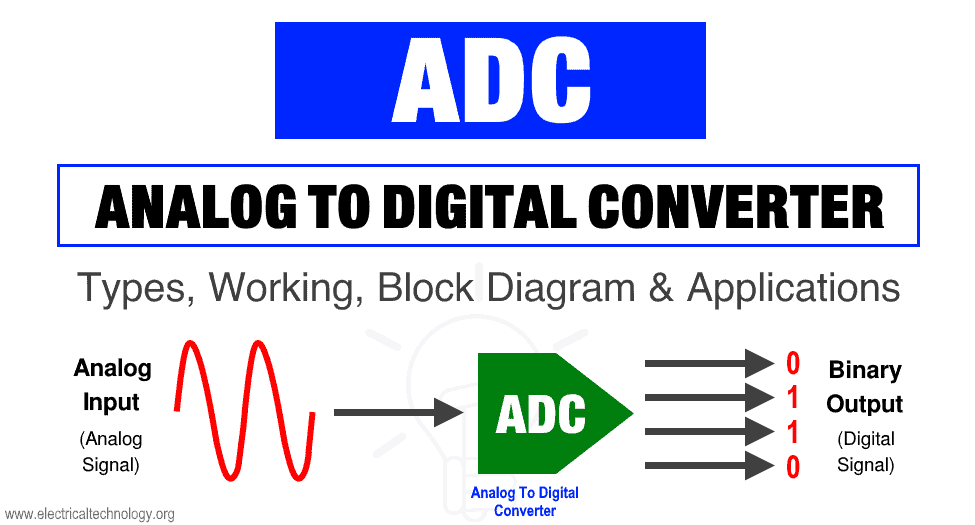 In the real world, every real quantity such as voice, temperature, weight etc exists in the analog state. And it cannot be processed by any digital device such as a computer or a cell phone.

These analog quantities are converted into digital form so that a digital device can process it. This conversion is done using analog to digital converter.

The analog signal is first applied to the ‘sample‘ block where it is sampled at a specific sampling frequency. The sample amplitude value is maintained and held in the ‘hold‘ block. It is an analog value. The hold sample is quantized into discrete value by the ‘quantize‘ block. At last, the ‘encoder‘ converts the discrete amplitude into a binary number.

The conversion from analog signal to a digital signal in an analog to digital converter is explained below using the block diagram given above.

The sample block function is to sample the input analog signal at a specific time interval. The samples are taken in continuous amplitude & possess real value but they are discrete with respect to time.

The sampling frequency plays important role in the conversion. So it is maintained at a specific rate. The sampling rate is set according to the requirement of the system.

The second block used in ADC is the ‘Hold’ block. It has no function. It only holds the sample amplitude until the next sample is taken. The hold value remains unchanged till the next sample.

This block is used for quantization. It converts the analog or continuous amplitude into discrete amplitude.

The on hold continuous amplitude value in hold block goes through ‘quantize’ block & becomes discrete in amplitude. The signal is now in digital form as it has discrete time & discrete amplitude.

The encoder block converts the digital signal into binary form i.e. into bits.

As we know that the digital devices operate on binary signals so it is necessary to convert the digital signal into the binary form using the Encoder.

This is the whole process of converting an Analog signal into digital form using an Analog to Digital Converter. This whole conversion occurs in a microsecond.

Resolution of an ADC is the number of bits that represents the digital signal’s amplitude.

The analog signal has continuous amplitude. It can have infinite values i.e. real, floating basically any value one can imagine. On the other hand, the digital signal has a discrete and finite number of values. These discrete values are represented using binary numbers (bits).

To better understand the idea of resolution of ADC, 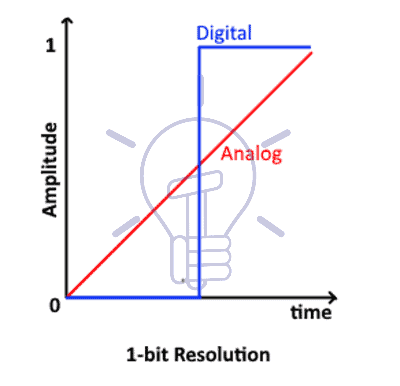 The figure above shows an analog signal represented in a digital form which is either 0 or 1. This is a 1-bit resolution. The resolution of ADC defines its number of steps.

Where n is the number of bits. Therefore, there are 2 steps in 1-bit resolution. 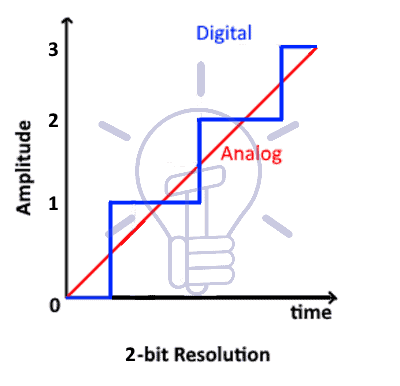 This figure shows the conversion of analog to digital in 2-bit resolution. There are 4 steps or quantization levels. 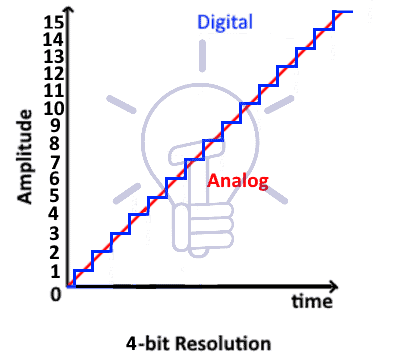 Width Of The Step

The voltage difference between two adjacent steps is known as the width of the step. It is denoted by Δv.

So a single step represents a fixed voltage that is

Where vref is the maximum voltage being converted & n represents the bits of resolution.

The ADC updates its value if the increase or decrease in its input voltage is greater than Δv/2. Any change less than Δv/2 will not be registered. This is known as Quantization Error.

In other words, the difference between the input and the digital round-off figure of output is known as quantization error.

The increase in the resolution of the ADC decreases the step-size if the vref remain constant. Consequently, the quantization error decreases.

The number of samples taken during a single second is known as sampling rate or sampling frequency.

The sampling rate should be set according to the input signal. It should not be very low or very high. 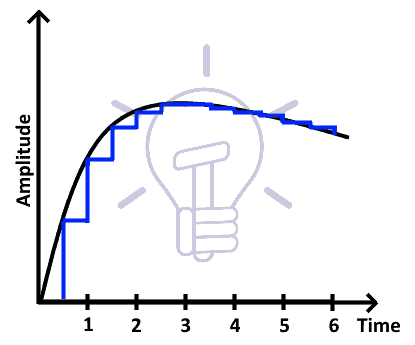 This example shows that the sampling rate is 0.5 sec, as it takes 2 samples in one second. 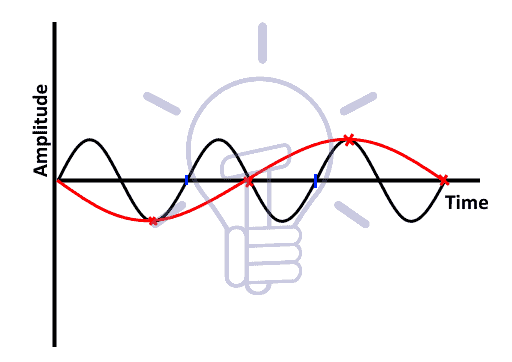 If the sampling rate is very low then the resultant signal will not look anything like the original signal. In fact, it will become a different signal after reconstruction. This problem is known as aliasing.

The offset in ADC is the shift in the digital output. For example, for input vin = 0, the output might not necessarily be digital 0. It can be digital 5, which will be the offset of the ADC.

In today’s modern world almost every device has become the digital version of itself & they need to have ADC in it. Because it has to operate in digital domain which can be only acquired using analog to digital converter (ADC).