In electronics, Rectifier circuit is the most used circuit because almost every electronic appliance operates on DC (Direct Current) but the availability of the DC Sources are limited such as electrical outlets in our homes provide AC (Alternating current). The rectifier is the perfect candidate for this job in industries & Home to convert AC into DC. Even our cell phone chargers use rectifiers to convert the AC from our home outlets to DC. Different types of Rectifiers are used for specific applications.

We mainly have two types of voltage types present that are widely used these days. They are alternating and direct voltage types. These voltage types can be converted from one type to another using special circuits designed for that particular conversion. These conversions happen everywhere.

Our main supply which we get from power grids are alternating in nature and the appliances we use in our homes generally require a small DC voltage. This process of converting alternating current into direct current is given the name rectification. Converting AC to DC is preceded by further process which can involve filtering, DC-DC conversion and so on. One of the most common part of an electronic power supply is a bridge rectifier.

Another way to look at the rectifier circuit is that, it can be said to convert currents instead of voltages. This makes more intuitive sense, because we are more accustomed to using current to define a component’s nature. Concisely, a rectifier take a current which has both negative and positive components and rectifies it such that only the positive component of the current remains.

Bridge rectifiers are widely used in power supplies that provide necessary DC voltage for the electronic component or devices. The most efficient switching devices whose characteristics are known fully are diodes. In theory any solid-state switch which can be controlled or cannot be controlled can be used instead of the diodes. 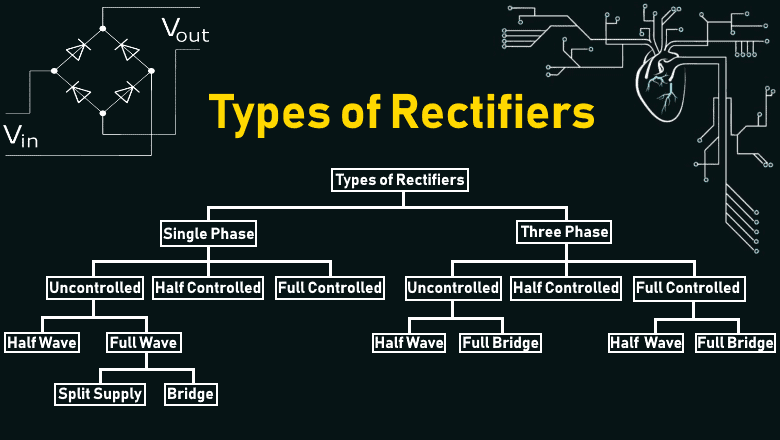 A Rectifier is an electrical device that is made of one or more than one diodes that converts the alternating current (AC) into direct current (DC). It is used for rectification where the process below shows that how it convert AC into DC..

Rectification is the process of conversion of the alternating current (which periodically changes direction) into direct current (flow in a single direction).

There are mainly two types of rectifiers:

The further classification is based on the switching devices the rectifier uses and the types are uncontrolled, half controlled and full controlled rectifiers. Some of the types of rectifiers are discussed below.

Based on the type of rectification circuit does, the rectifiers are classified into two categories.

We will discuss both the controlled and uncontrolled (half waves and full waves bridge) rectifiers in details with circuit diagrams and operation as follows.

The type of rectifier whose output voltage cannot be controlled is called an uncontrolled rectifier.

A rectifier uses switches to work. The switches can be of various types, broadly, controllable switches and uncontrollable switches. A diode is unidirectional device that allows the current flow in only one direction. The working of a diode is not controlled as it will conduct as long as it is forward biased.

With a configuration of diodes in any given rectifier, the rectifier is not fully in the operator’s control, so these types of rectifiers are called uncontrolled rectifiers. It does not allow the power to vary depending on the load requirement. So this type of rectifier is commonly used in constant or fixed power supplies.

Uncontrolled rectifier uses only diodes and they give a fixed output voltage depending only on the AC input.

A Type of rectifier that converts only the half cycle of the alternating current (AC) into direct current (DC) is known as halfwave rectifier. 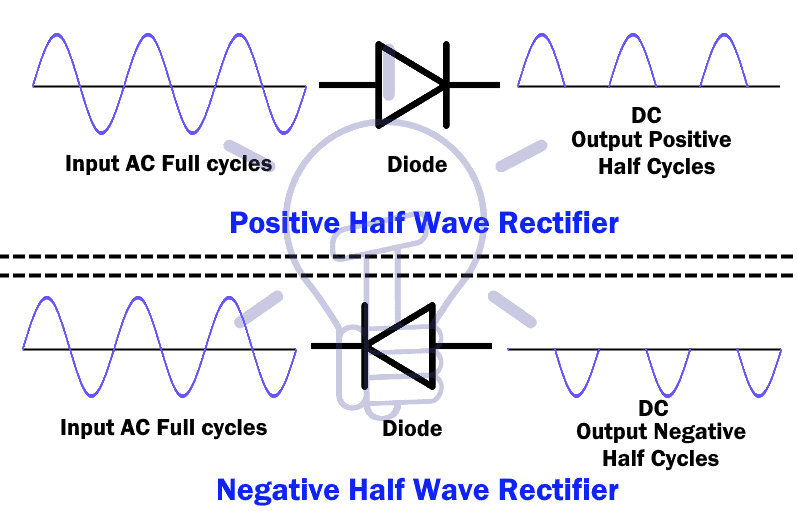 In all types of rectifiers, a half-wave rectifier is the simplest of them all as it is composed of only a single diode. 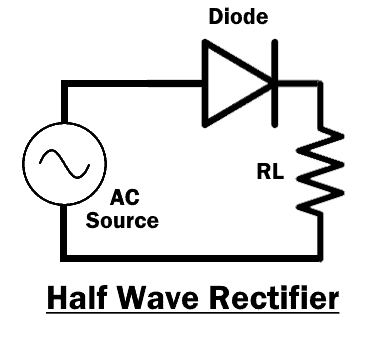 A diode allows the current flow in only one direction known as forward bias. A load resistor RL is connected in series with the diode. 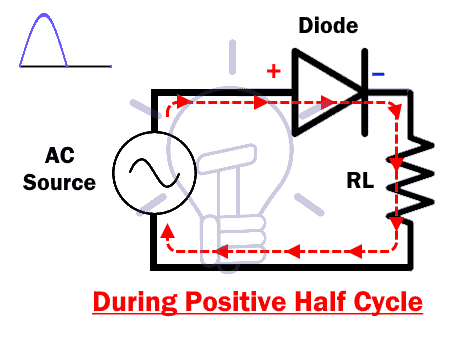 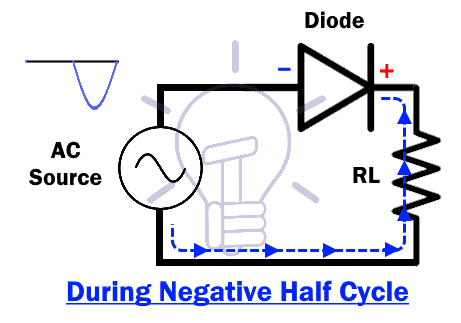 So when an AC source is connected to the half-wave rectifier, only half cycle will flow through it as shown in the figure below.

The output of this rectifier is taken across the load resistor RL. if we look at the input-to-output graph, it shows a pulsating positive half cycle of the input.

The output of the half wave rectifier has too many ripples & it is not very practical to use this output as DC source. To smooth this pulsating output, a capacitor is introduced across the resistor. The capacitor will charge during the positive cycle and discharge during the negative cycle to give out a smooth output signal.

Such types of rectifiers waste the power of AC input’s half cycle.

A full wave rectifier converts both positive and negative half cycles of the AC (alternating current) into DC (direct current). It provides double output voltage compared to the halfwave rectifier

A full wave rectifier is made up of more than one diode.

There are two types of full wave rectifier.

A bridge rectifier uses four diodes to convert both half cycle of the input AC  into DC output.

In this type of rectifier, the diodes are connected in a specific form as given below. 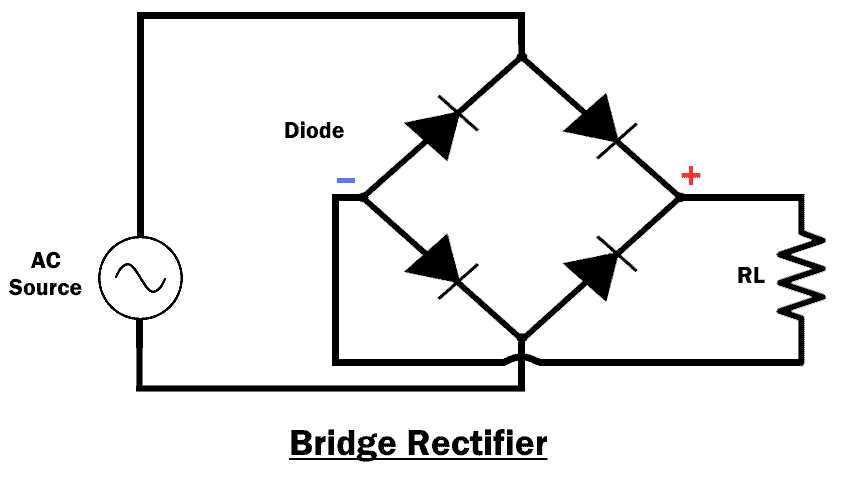 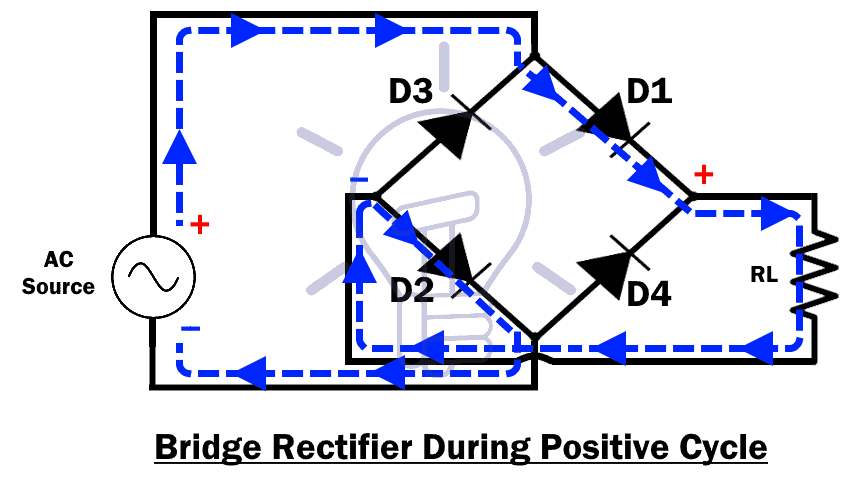 During the negative half cycle, the diode D3 & D4 becomes forward bias while D1 & D2 becomes reverse bias. But the polarity across the load resistor RL remains the same and provides a positive output across the load. 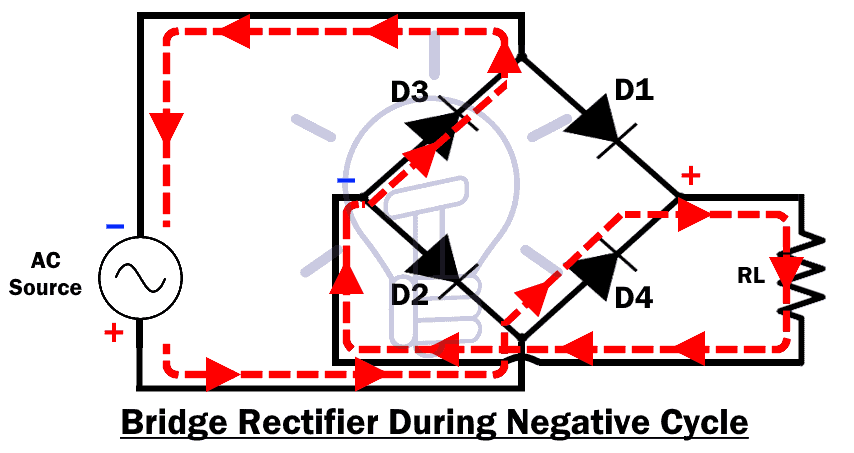 In order to make the output voltage smooth & steady, a capacitor is placed at the output as shown in the figure below.

The capacitor charge & discharges which make smooth transitions between the half cycles.

From the circuit diagram it is apparent that the diodes are connected in a particular fashion. This unique arrangement gives the converter its name. In bridge rectifier, voltage that is given as the input can be from any source. It can be from a transformer that is used to step up or down the voltage or it can be from the mains of our domestic power supply.  In this article, we are using a 6-0-6 centre tapped transformer for providing AC voltage.

Again, we get a positive half cycle at the output. At the end of the rectification process, the negative part of the AC current is converted into a positive cycle. The output from the rectifier is two half-positive pulses with the same frequency and magnitude as that of the input.

Although we use four individual power diodes to make a full wave bridge rectifier, pre-made bridge rectifier components are available “off-the-shelf” in a range of different voltage and current sizes that can be used directly to make a working circuit.

The output voltage waveform after the rectification is not a proper DC, so we can try to make it more into a DC waveform using a capacitor for filtering purpose. Smoothing or reservoir capacitors that are connected in parallel with the load across the output of the full wave bridge rectifier circuit increases the average DC output level to the required average DC voltage at the output because the capacitor not only acts as a filtering component, but it also periodically charges and discharges effectively increasing the output voltage.

Advantages of a Bridge Rectifier: 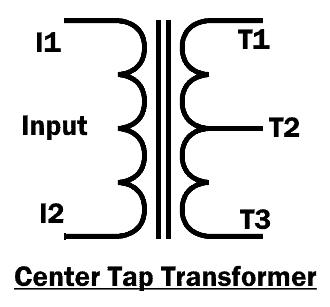 The design of the center-tap rectifier is given below: 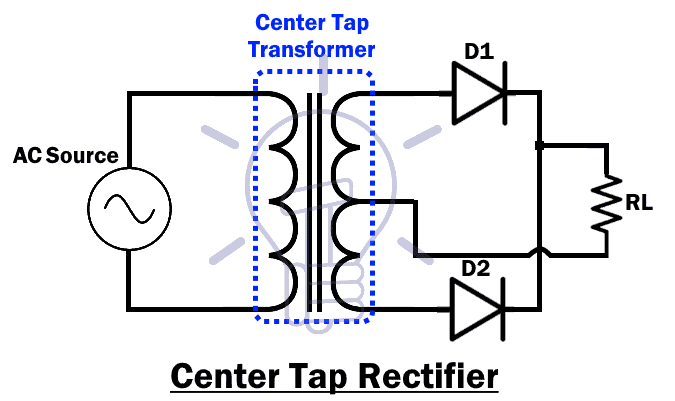 During the input positive half cycle, the T1 will produce positive and T2 will produce a negative voltage. The diode D1 will become forward bias & diode D2 will become reverse bias. This makes a close path from T1 to T2 through the load resistor RL as shown below. 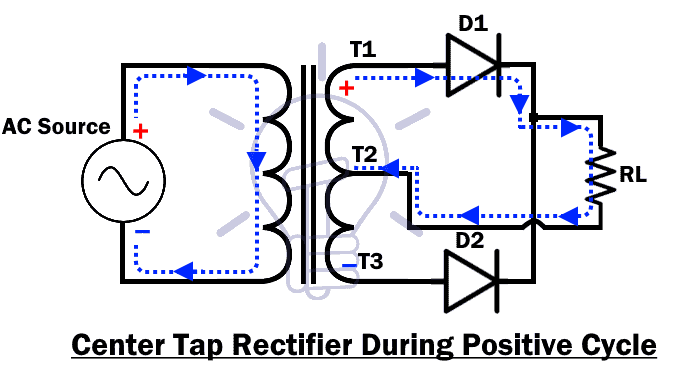 Now during the input negative half cycle, T1 will generate negative cycle & T2 will generate a positive cycle. This will put the diode D1 into reverse bias & diode D2 in forward bias. But the polarity across the load resistor RL is still the same as the current takes the path from T3 to T1 as shown in the figure below. 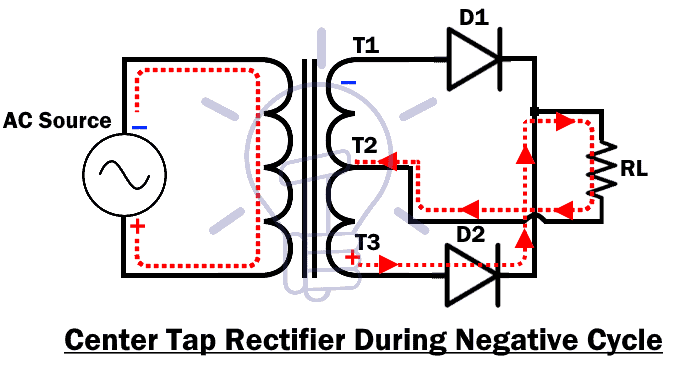 The DC output of a center-tap rectifier also has ripples and it’s not smooth & steady DC. A capacitor at the output will remove the ripple and make a steady DC output. 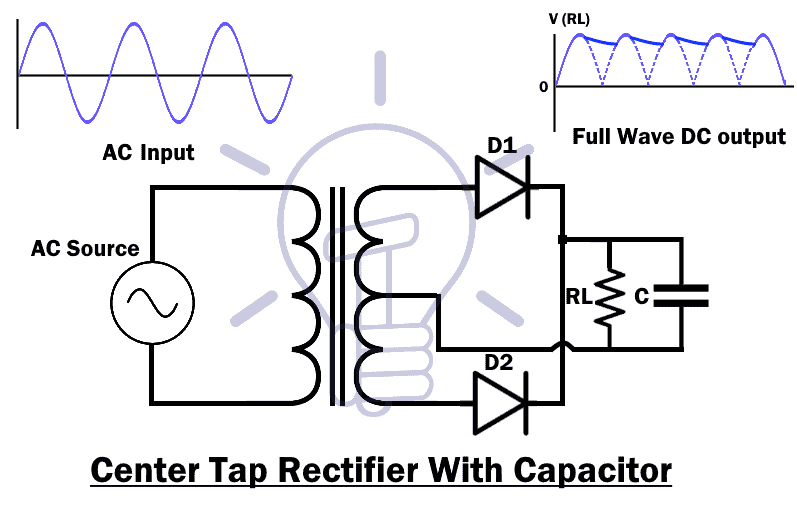 A type of rectifier whose output voltage can be varied or changed is called controlled rectifier.

It is composed of one or more than one SCR (Silicon Controlled Rectifier).

An SCR, also known as thyristor is a three-terminal diode. These terminals are Anode, Cathode & a control input known as Gate.

Just like a simple diode an SCR conduct in forward bias and blocks current in reverse bias but it only starts forward conduction when there is a pulse at the gate input. So the output voltage can be controlled using the gate input.

There are two types of controlled rectifier.

The half wave controlled rectifier is made up of a single SCR (Silicon Controlled Rectifier).

An SCR does not conduct in reverse bias, so it will block the negative half cycle.

In this way, we can control the output voltage of this rectifier.

The output of the SCR is also a pulsating DC voltage/current. These pulses are removed by using a capacitor parallel to the load resistor RL.

A type of rectifier that converts both positive and negative half cycle of the AC into DC as well as controls the output amplitude is known as a full wave controlled rectifier.

In this rectifier, the diode bridge is replaced by an SCR (Thyristor) bridge with the same configuration as shown in the figure below. 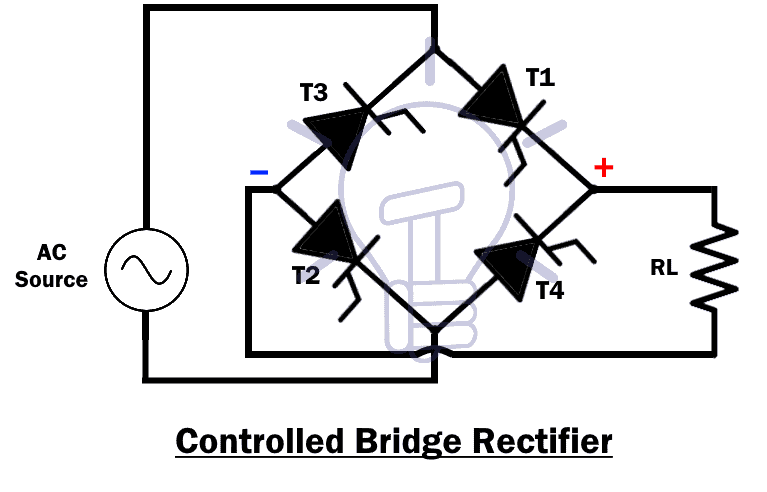 During the positive cycle, the SCR (thyristor) T1 & T2 will conduct when the gate pulse is applied. T3 & T4 will be reversed bias, so they will block the current. The output voltage will be established across the load resistor RL as shown below. 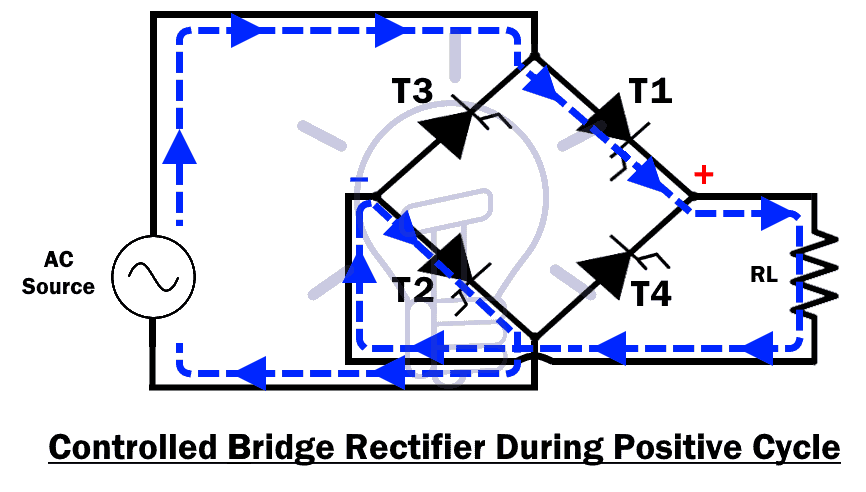 During the negative half cycle, the thyristor T3 & T4 will become forward bias considering the gate input pulse & the T1 & T2 will become reverse bias. The output voltage will appear across the load resistor RL. 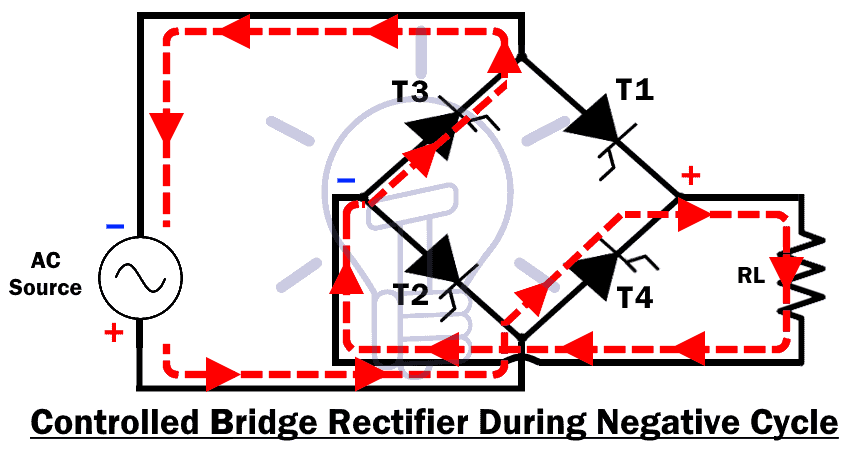 At the end of the output, a capacitor is used to remove the ripples and makes the output steady & smooth. 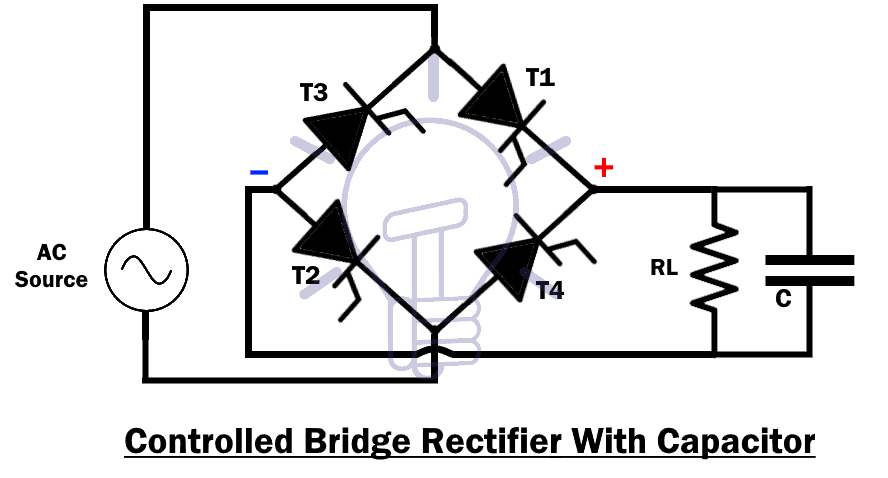 Both of these SCR switchings will be timed differently according to the input AC frequency.

Its operation is the same as the uncontrolled rectifier & its schematic design is given below.

The single phase bridge rectifier consists of four diodes, whereas a three phase rectifier uses six diodes arranged in a particular fashion to get the desired output. These can be controlled or uncontrolled rectifiers depending on the switching components used in each rectifier such as diodes, Thyristors, and so on.

The following table shows the compassion between different types of rectifiers such as half wave rectifier, full wave rectifier and center tapped rectifier.

Below is the list of common applications and uses of different Rectifiers.

How to Test a Relay? Checking SSR & Coil Relays