Colorful visuals is what we see in our everyday lives without any restrictions, hence a life without vision is not something anyone would ever want to have. How dark and gloomy a person’s life can get who can never see the world! As human beings it isn’t worthwhile at all to just help these visually impaired people in their regular tasks, rather do something better than that.

This is the 21st century with rapid technological advancements and therefore we live in a world with much more advanced scientists and developed engineers with whose help nothing is impossible. Scientists are the ones who invent new ways whereas it is because of the engineers that ideas are being put into action. Due to these advancements, technology has proved itself in providing virtual eye sight too. Hence it is our foremost duty to utilize these inventions to further help to create a better world.

In the recent times, more people are suffering from blindness and a good count of people are facing the difficulty of low vision, which is one of the reasons why scientists and doctors have invented such artificial ways of curing such problems.

However, the sole purpose of BIONIC EYE is restoring visual signal to whom who are suffering from eyesight difficulties such as pigmentosa and retinitis. This entire process is based on signal networking. This system involves a video camera, along with a pair of glasses which again captures and enhances the images. This system has to be connected with the fatal eyes, in order to make it work. The images that the camera captures, are then transmitted to a retinal implant or electrode which sends visual messages to the brain for further processing. 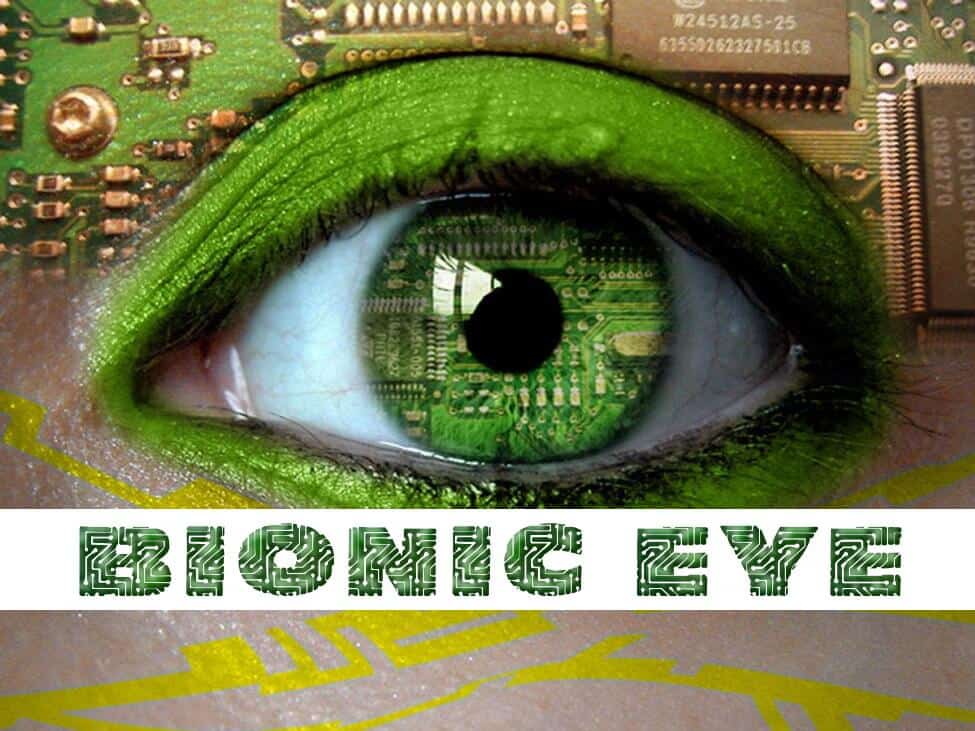 Bionic Eyes have Proven to be More Beneficial than Prosthetic Eyes. Prosthetic eyes are another pair of artificial eyes that only replaces the somatic composition and appearance on any eye that should be removed due to any particular disease. It is not a real eye, but a shell that covers the eye socket.

Bionic eyes therefore implants, and also works accordingly inside the brain cells. These artificial eyes helps one to view the world in a way as if it was their own real eyes. There are innumerable reasons for eye blindness, therefore there are innumerous cure to it as well. Before going for an eye surgery it is very important to know the exact cause behind one’s blindness.

A visually impaired person would be only able to see when lights enter the eye, and when the cornea and lens focuses light onto the retina at the backside of the eyeball in this process. Light-sensitive cells in the retina then transforms the lights focused into electrical energy, whose message is then received by the optic nerve to the brain.

It is not always necessary for this process to work for all the visually challenged people, given by the fact everyone has different reasons behind their blindness. For most of the failed cases, the problem that occurs is with the damaged lens or cornea, and due to this the retina doesn’t receive the light. Sometimes what happens is when the signal received by the artificial eye gets lost in the process of being transferred to the brain. Blindness doesn’t have one cause to it, just like that the Bionic eye also have other utilities as well.

In the recent times, these eyes that are surgically operated are retinal implants which are completely approved and commercial in use. This is the surgical process by which cornea transplants and cataract surgeries can be easily done, by restoring the cornea and lens only if these structures are clouded together.

The instruments which are involved in this process are very small machines called the micro-electrodes, image sensors, receivers, microprocessors, radio transmitters, and retinal chips which are very carefully placed near one of the eyes, with the optic nerve which is directly connected to the brain. Though it is an artificial implantation but unlike prosthetic eyes it does provide visual sensation and gives the person the feeling of real eyes, by allowing the passage of light through the retina and then by finally entering the other brain cells.

We all know that the human eye is one of the sensitive organs and must not be deal with any casualties. The entire process of visualization comes into action when the eye reacts to light and allows the passage of vision. Signals are being continuously sent to the brain, and the brain is then able to function accordingly, for example, identify colors, and other differentiations.

Neurons are brain cells which further helps the brain to recognize things through the nervous system. The human eye is connected to our nervous system, hence the light captured by the retina sends this image to the brain, and is further processed. 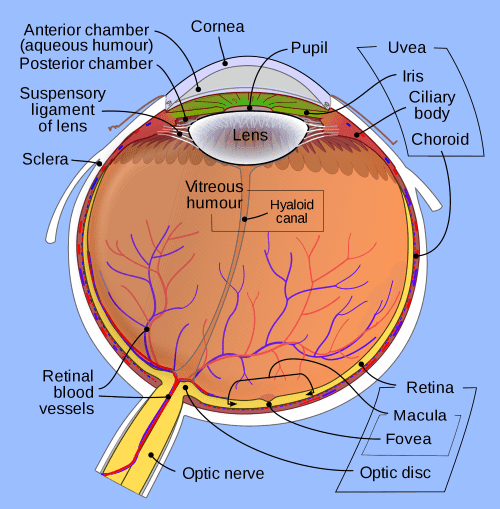 What is The Bionic Eye?

It is an artificial eye that allows the passage of visual pictures into the brain. The devices that are being used in this process are microprocessors, image sensors, radio transmitters, and other networking chips. As technology has reached heights and is always developing, this entire surgical process allows the visually challenged people to see again.

Bionic Eye works on a computer connecting chip that is carefully placed right behind the damaged eye and then linked to a very small video camera made like glasses so that the person can wear. The camera which captures the image, sends the electronic signal that the brain can easily perceive. The image which the bionic eye receives, is not that translucent enough but the brain easily reads it. The implantation kills the affected cells and goes into the rest rain cells. 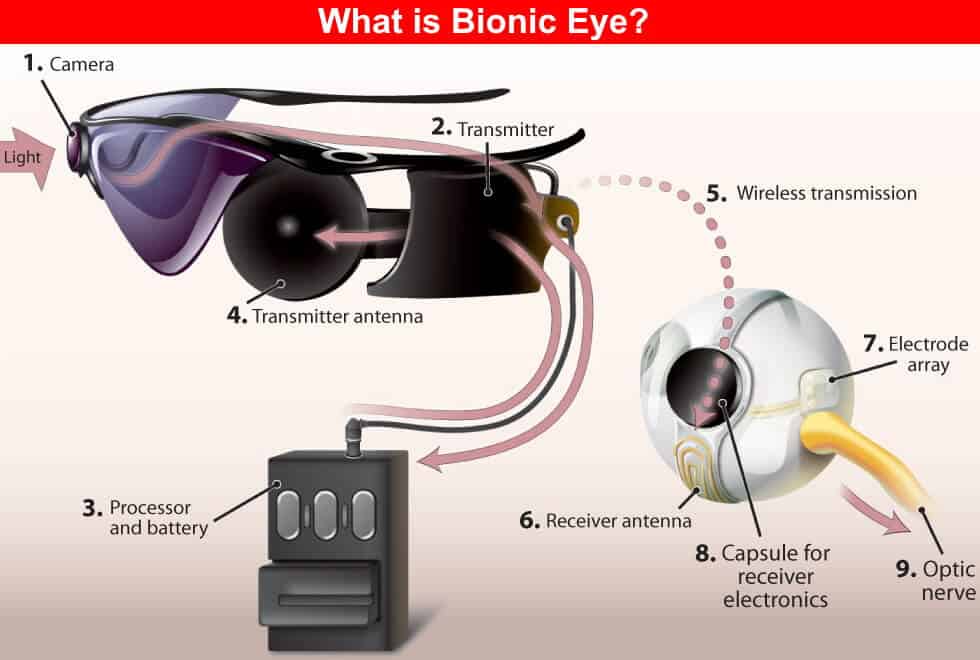 How Does a Bionic Eye Work?

The eye networking system involves a camera that are connected to a pair of glasses, which radiates high-frequency radio signals to a microchip implanted in the retina. Electrodes on the implanted chip transforms these signals into electrical impulses to give way to the cells inside the retina that directly is connected to the optic nerve. These signals are then transferred with the optic nerve to the vision processing centers of the brain where they are perceived as a picture.

The Bionic eye has the ability to work as similar to the real eye, by receiving images from the camera that is placed along with glasses which the person can wear and is a very minute device because it easily fits into the glass so that later on it can be used again, as an artificial eye. The images captured by the retina are then sent to a small electronic system. This device has the ability to transform the given image data to electronic signal and later transfers it to receivers, to the retina more precisely.

The electrode panel gives out pulses which reaches the optic nerve to the brain, also in case of a damaged optic nerve the signals can be easily sent with the use of other specialized devices. Just when the brain gets the signals, the brain starts processing accordingly letting the blind person see. 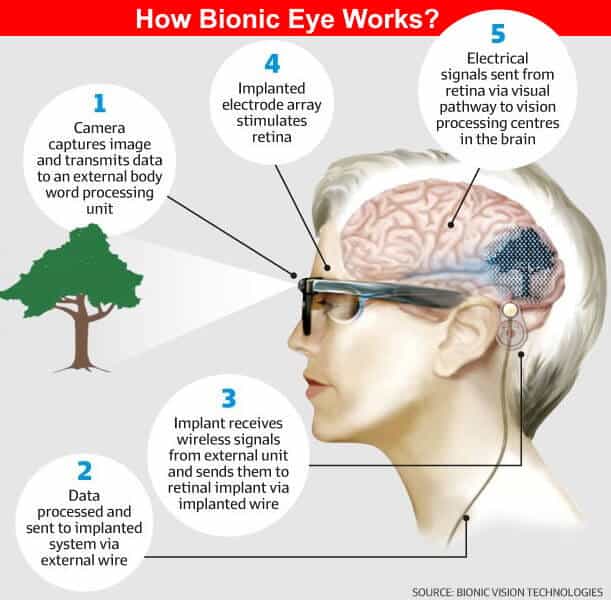 Along with rapid technological changes it is very much possible to produce higher quality electrode with functional vision for the visually impaired people. Big scientists are testing if devices with even more electrodes can take over this entire process and would be able to send signals or not. In the recent times higher quality electrodes with a capacity of providing subject beamed with better quality resolution images, will soon be introduced.

How Does it Feel to Look through Bionic Eyes?

These artificial eyes cannot restore vision like the normal human eyes do, but transparent enough to understand and recognize things. With these glasses blind people usually tend to see larger or rather sometimes smaller objects as compared to the normal eyes. 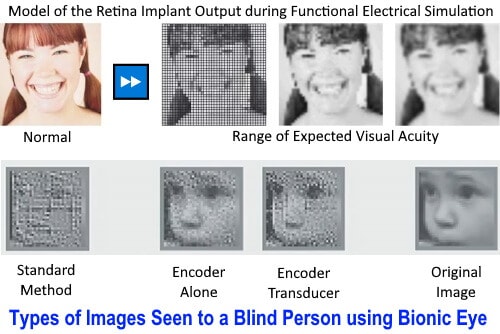 Hence, this is how we engineers can help blind people to see through a Bionic Eye and make them smile.