The Alternating Current (AC) and Direct Current (DC) are the two types of electric currents that coexists in our daily life. They are both used for supplying power to the electrical devices. But they are very different. The outlets in our home provide AC supply while the batteries provide DC supply. We cannot connect a DC appliance to the AC outlet (well we can but it will not work and worst case scenario it will blow up). The reason is the difference between their behavior and how they affect the circuits.

In this article, we will briefly discuss the difference between Alternating Current (AC) and Direct Current (DC) but first, let’s discuss AC and DC.

Based on the direction of motion of the electron or electric current, it is classified into two main types; Alternating Current (AC) and Direct Current (DC)

When the direction of the electric current reverses periodically, it is said to be Alternating Current. Since the direction of the current reverses periodically, the voltage polarity also reverses i.e. the high potential (+) and low potential (-) swaps together. Therefore, Alternating current is denoted by a wave (~) sign. The number of times electric current changes its direction in one second is called its frequency and it is commonly 50 Hz (Europe) or 60 Hz (US).

When a coil or a loop of wire is placed in a varying magnetic field, it induces an electric current in the coil. This principle is applied in the devices called Alternators which is used for the generation of Alternating current.

The magnitude of the alternating current and voltage varies continuously through time. It oscillates between its maximum peak point and its minimum peak point along a common reference point. The resultant waveform could be a sine wave, square wave, triangular wave, saw tooth, etc. the most common waveform of AC that we use in our homes is sine wave. 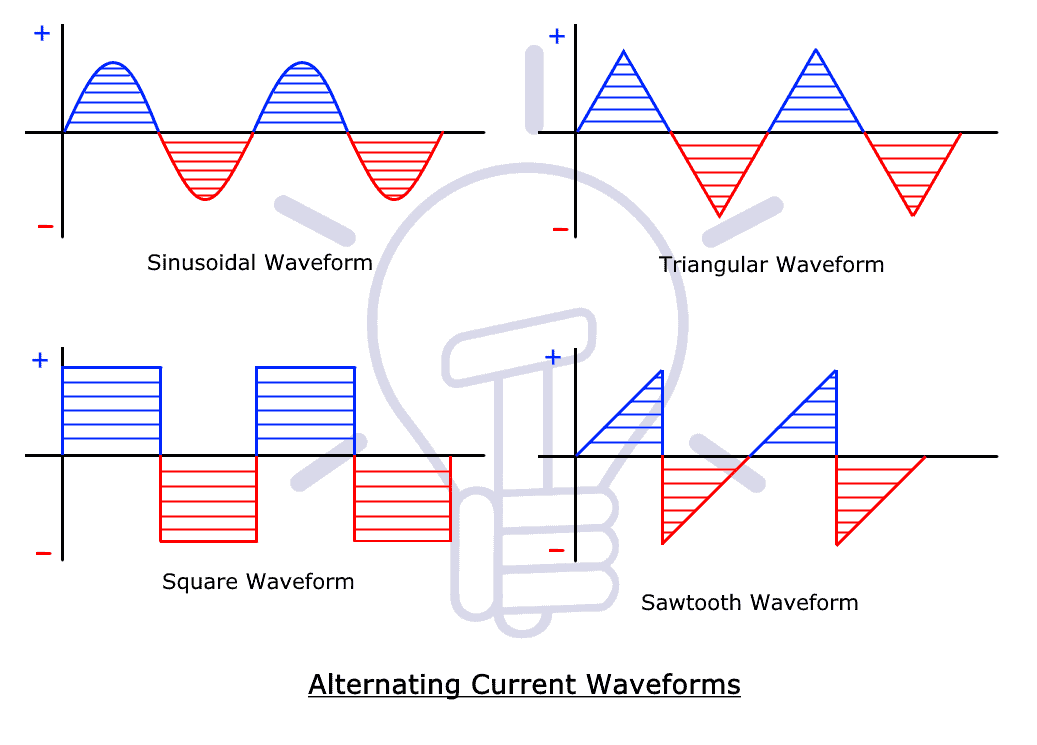 We already know that alternating current has a specific frequency and we know that frequency affects the reactance of the capacitor and inductor. Therefore, the alternating current introduces reactance to the circuit. The reactance causes a phase difference between the voltage & current waves. We can also say that this is the reason the power factor is involved in only AC systems. Because the definition of power factor is cos (θ) where θ is the phase difference between the voltage waveform and current waveform

Direct current can be generated in many ways. The same AC generation method can be used to generate DC by connecting a device called a commutator. The commutator is a rotating device that ensures to keep the current flow in a single direction. 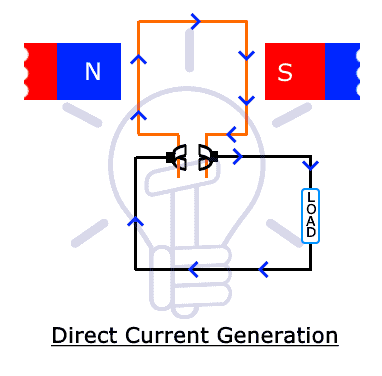 The Direct Current is usually generated by using batteries and cells. The batteries include a chemical substance that releases electrons upon chemical reaction and supply it to the electrical circuit.

The Alternating current can also be converted into DC by using a device called a rectifier.

The direct current does not have any specific waveform because it only flows in a single direction. If you connect a DC to an oscilloscope, it will show a straight line. However, if the voltage is pulsating, say in a digital circuit that purely runs on DC voltages, the signal waveform might appear as a pulse train or square waves. But the waveform never falls below 0V.

Storage and Conversion between AC & DC

We need both types of electric current in our daily life application. Digital devices such as smartphones, laptops and computers, etc. run on DC while our home and  kitchen appliances such as fans, lights, and mixer, etc. run on AC.

The outlets in our home provide AC supply but when we need to power a DC device using the same outlet, we use a rectifier (such as the power supply in PC or the power adapter in a laptop cable). It helps us using the same power source to power both types of devices. And we can also use the DC supply of batteries to power AC appliances using Inverters.

But there is a limitation of the alternating current i.e. the electric current can only be stored when it is in DC form. Therefore, the AC is converted into smooth DC before charging a battery such as in cellphones.

The charge storage provides mobility and wireless capability to the device. It is also used as an emergency backup in harsh conditions to power crucial equipment such as in hospitals etc.

In AC, the voltages can be easily converted between high and low voltages using a device called a Transformer. We use Step-Up Transformers at the generation stations to bump up the voltages for transmission over long distances. Also, the same voltages are brought down to safe levels for domestic or commercial uses using the Step-Down Transformer usually seen on utility poles.

There is very little loss in high voltage DC transmission and it requires only two wires but its maintenance and conversion between high and low voltage is very costly so it was never adopted. The DC voltage is dangerous than AC because the AC fluctuates while the DC is a constant stream of current and it will never let you go.

Difference Between Alternator and Generator with Comparison

Difference between Analog and Digital Circuit - Digital vs Analog