An Introduction to Insulating And Dielectric Materials

Definition of Insulating and Dielectric Materials

An electrical insulating material can be defined as the material that does not allow electric current to pass through it. 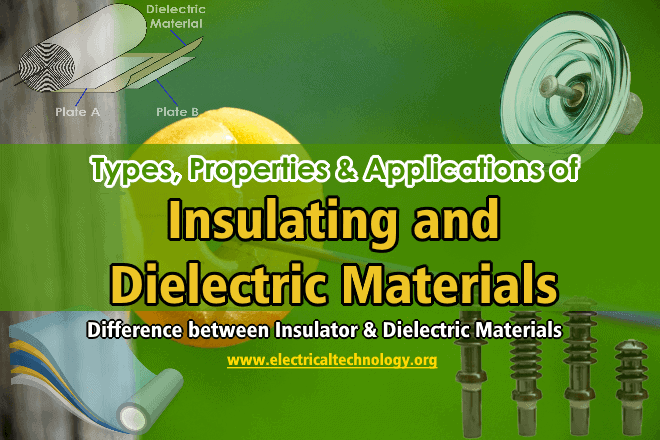 For electrical applications a particular category of insulating materials is used to separate electrically the conducting parts of equipment from each other and from earthed and “no live” components of equipments and networks.

Dielectric materials. A dielectric is an electrical insulating material that can be polarized by an applied electric field (notation: E; unit: volt per meter – V/m). When a dielectric is placed in an electric field, electric charges do not flow through the material as they do in a conductor, but only slightly shift from their average equilibrium positions causing dielectric polarization, which an example can be seen in Figure 1. 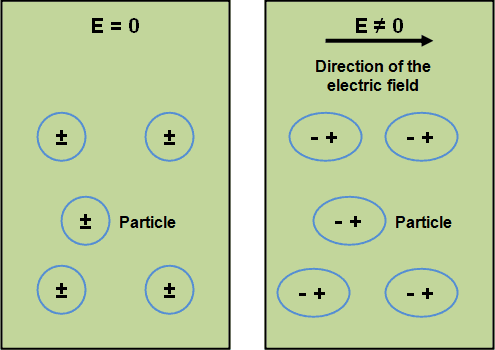 Due to dielectric polarization, positive charges are displaced toward the field and negative charges shift in the opposite direction, what creates an internal electric field which reduces the overall field within the dielectric itself.

From the above statements, It has been cleared that all dielectrics are insulators, but all insulators are not dielectrics.

are those substances which will not allow the flow of electron through them due to very low free electrons in it and they are having low dielectric constant (Relative permittivity = εr). It is same like resistance of a resistor.

are those substances same as insulators but will allow the flow of electron through them when subjected to an external electric field as they can be polarized. It also can be defined as the ability to store charge (energy) by mean of polarization such in a capacitor. Also, they are having high dielectric constant (Relative permittivity = εr).

Examples: A common example of a dielectric is the electrically insulating material between the metallic plates of a capacitor, (such as mica, laminated paper). Other examples: air, ceramic etc.

Dielectric materials are largely used in electrical equipments and networks, being the most common used the types indicated in Table 1, 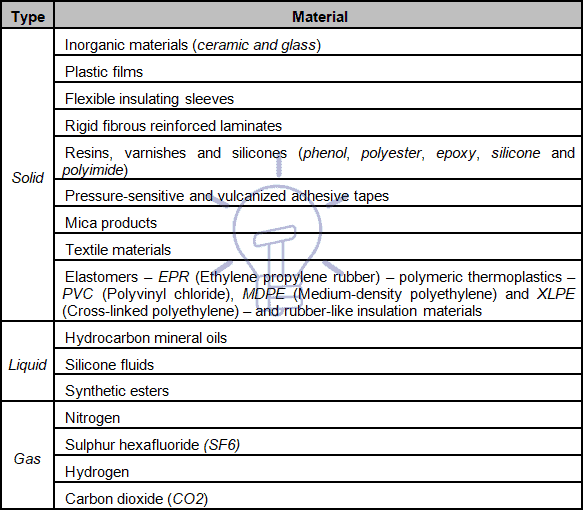 A major application for inorganic materials is in high and medium voltage substation equipments and overhead lines as insulators or as bushings on high voltage transformers and switchgears.

Plastic films have been used as films in a variety of applications such as the insulation between foils in capacitors and slot insulation in rotating electrical machines.

Common use for flexible insulating sleevs is the protection of cables and components from the deleterious effects of mechanical and thermal damage, and may find application in electrical machines, transformers, domestic and heating appliances, light fittings, cable connections (joints and terminations) and switchgears.

Resins and varnishes are used by in the impregnation and coating of electrical equipment (dry type transformers, as an example) in order to improve its resistance to working conditions, to enhance its electrical characteristics and to increase its working life.

Elastomers and thermoplastics are commonly used in the insulation of power, control and communications cables.

Nowadays the principal uses of liquid dielectrics, mainly hydrocarbon mineral oils, are as an insulation and cooling medium for transformers, earth reactors and shunt reactors, capacitors and rheostats.

Two gases already in common use for insulation are nitrogen and sulphur hexafluoride (SF6). Nitrogen is used as an insulating medium in some sealed transformers and Gas Insulated Lines (GIL), while SF6 is used in in high and medium voltage switchgears and circuit breakers, because of its insulating properties and its arc-extinguishing capabilities, and also in Gas Insulated Transformers (GIT) as an insulation and cooling medium.

However, due environmental conditions, in medium voltage installations (circuit breakers, contactors and capacitors) vacuum has nowadays a preferential use.

Properties and Behavior of Dielectric Materials

The most important properties of dielectric materials are: 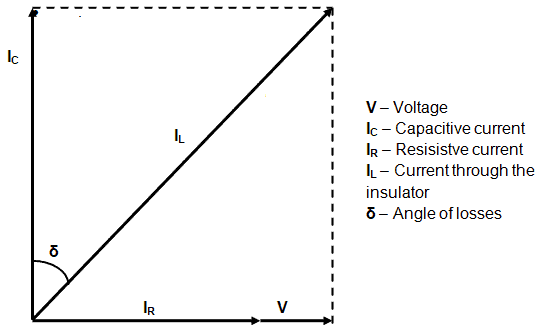 Figure 2 – Angle of losses and currents of an insulator

Another significant aspect of all dielectric materials is the maximum temperature at which they will perform satisfactorily.

Generally speaking, dielectric materials deteriorate more quickly at higher temperatures and the deterioration can reach a point at which the insulation ceases to perform its required function.

This characteristic is known as ageing, and for each material it has been usual to assign a maximum temperature beyond which it is unwise to operate.

The ageing of a dielectric depends not only on the physical and chemical properties of the material and the thermal stress to which it is exposed, but also on the presence and degree of influence of mechanical, electrical and environmental stresses.

Dielectric materials may be deteriorated (premature ageing) when subjected to excessive heat and overvoltages and may be contaminated by other materials, such as copper particles, water and gas, causing dielectric failure.

The definition of a useful lifetime will also vary according to the type and usage of equipment; that must be taken into account when choosing the dielectric material for a particular application.