What is Corona Effect or Corona Discharge?

When an alternating potential difference is applied across two conductors whose spacing is large as compared to their diameters, there is no apparent change in the condition of atmospheric air surrounding the wires if the applied voltage is low.

However, when the applied voltage exceeds a certain value, called critical disruptive voltage, the conductors are surrounded by a faint violet glow called corona.

The phenomenon of corona is accompanied by a hissing sound, production of ozone, power loss and radio interference.

The higher the voltage is raised, the larger and higher the luminous envelope becomes, and greater are the sound, the power loss and the radio noise.  If the applied voltage is increased to breakdown value, a flash-over will occur between the conductors due to the breakdown of air insulation.

Corona effect or corona discharge in transmission lines and power system may be defined as:

The phenomenon of violet glow, hissing noise and production of ozone gas in an overhead transmission line is known as corona.

If the conductors are polished and smooth, the corona glow will be uniform throughout the length of the conductors, otherwise the rough points will appear brighter. With d.c. voltage, there is difference in the appearance of the two wires.  The positive wire has uniform glow about it, while the negative conductor has spotty glow. 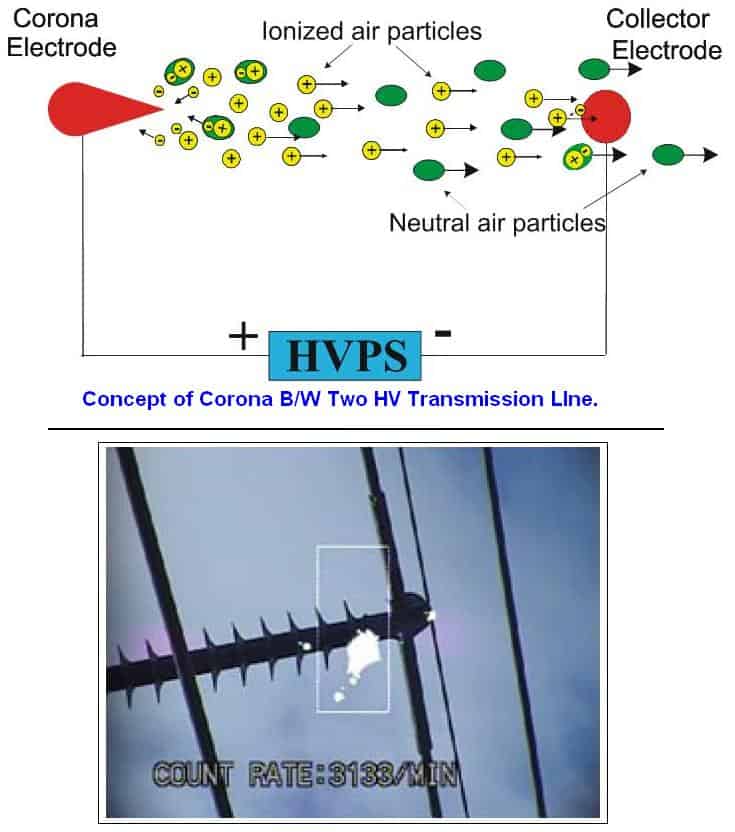 What is the Difference between Corona effect and Skin Effect.

Difference between Corona and skin effect as follows.

As described above, corona is an effect of violet glow, hissing noise and production of ozone gas in an overhead transmission line is known as corona which leads to hissing sound, production of ozone, power loss and radio interference in power system.

Skin effect is a behavior or tendency  of alternating current to flow through the surface (outer layer) of a conductor instead of the core of the wire in power system transmission lines.

In this scenario, the current density is lager near the surface of the wire or conductor and decreases with greater depths in the conductor which leads to increase in resistance of the conductor, thus increase the overall power loss in the power system (generally transmission lines). 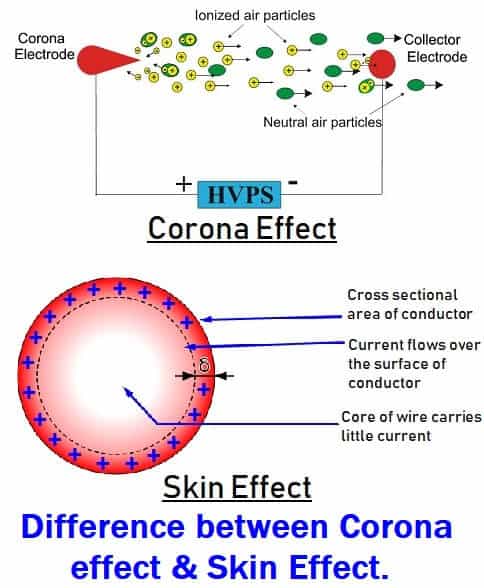 Some ionization is always present in air due to cosmic rays, ultra-violet radiations and radioactivity.  Therefore, under normal conditions, the air around the conductors contains some ionized particles (i.e., free electrons and +ve ions) and neutral molecules.

When the potential gradient at the conductor surface reaches about 30 kV per cm (max. value), the velocity acquired by the free electrons is sufficient to strike a neutral molecule with enough force to dislodge one or more electrons from it.

This produces another ion and one or more free electrons, which is turn are accelerated until they collide with other neutral molecules, thus producing other ions.  Thus, the process of ionization is cumulative. The result of this ionization is that either corona is formed or spark takes place between the conductors.

Corona effect or corona discharge is a phenomenon that results from a partial discharge in the air (or in any fluid) caused by the ionization of the environment when an electrical current flows in a conductor and when the electric field gradient[1] is strong enough to ionize the environment, but it is not strong enough to cause dielectric breakdown[2] or arcing between the conductors.

This phenomenon that is characterized by a glow (mostly with a color in blue/violet spectrum), mainly happens in overhead lines, close to the suspension and strain insulators, when the distance between conductors is much greater than the diameters of the conductors.

Generally for parallel conductors in the air there is corona effect when.

When studying corona effect it is important to evaluate the minimum value of the voltage between phases or between one phase and the neutral (or the ground) for which the corona effect takes place.

This voltage is named Critical Disruptive Voltage. If r [cm] is the radius of the conductor, d [cm] is the distance between the conductor and the neutral (or the ground) and U [V] is the gradient of the electric field E (mathematical notation: grad E), the critical disruptive voltage that we will designated as G, is calculated by the equation:

Where ln represents the natural logarithm.

Designating by G0 the value of grad E that obeys to the above condition the critical value of the disruption voltage (Uc) is calculated by the equation:

For different conditions of temperature and of atmospheric pressure, the density of the air is also different; it is possible to express that variation by a factor δ that for a given pressure P [Pa] and temperature θ [ºC] is calculated by the equation:

Being G’0 the value of grad E corresponding to the new atmospheric conditions, its value is calculated by the equation:

Hence, the critical value of the disruption voltage (U’c) is calculated by the equation:

Taking into account the irregularity of the conductor surface and expressing that irregularity as a factor m0, the value of U’c is then:

Common values of m0 are:

Another value used to characterize the corona effect is the Visual Critical Voltage, represented by Uv, that is the minimum voltage between one phase and the neutral (or the ground) for which the corona effect takes place all along the conductor. That voltage is calculated by the following empirical equation:

Factor mv is also a “measure” of the irregularity of the conductor, assuming the following values.

Another value that must be calculated when studying the corona effect is the losses caused by this effect; considering the rms value of Uc and being U the rms rated voltage of the network, both in kV, and f [Hz] the rated network frequency, losses by corona effect (Pco) are calculated by the equation:

The phenomenon of corona plays an important role in the design of an overhead transmission line. Therefore, it is profitable to consider the following terms much used in the analysis of corona effects:

It is the minimum phase-neutral voltage at which corona occurs. Consider two conductors of radius r (cm) and spaced d (cm) apart.  If V is the phase-neutral potential, then potential gradient at the conductor surface is given by:

If VC is the phase-neutral potential required under these conditions, then,

The above expression for disruptive voltage is under standard conditions i.e., at 76 cm of Hg and 25ºC.  However, if these conditions vary, the air density also changes, thus altering the value of go.

The value of go is directly proportional to air density.  Thus the breakdown strength of air at a barometric pressure of b (cm) of mercury and temperature of tºC becomes δ go where

Under standard conditions, the value of δ = 1.

Correction must also be made for the surface condition of the conductor.  This is accounted for by multiplying the above expression by irregularity factor mo.

It is the minimum phase-neutral voltage at which corona glow appears all along the line conductors.

It has been seen that in case of parallel conductors, the corona glow does not begin at the disruptive voltage Vc but at a higher voltage Vv , called visual critical voltage.

The phase-neutral effective value of visual critical voltage is given by the following empirical formula :

where mv is another irregularity factor having a value of 1·0 for polished conductors and 0·72 to 0·82 for rough conductors.

The phenomenon of corona is affected by the physical state of the atmosphere as well as by the conditions of the line.  The following are the factors upon which corona depends :

As corona is formed due to ionization of air surrounding the conductors, there-fore, it is affected by the physical state of atmosphere.  In the stormy weather, the number of ions is more than normal and as such corona occurs at much less voltage as compared with fair weather.

If the spacing between the conductors is made very large as compared to their diameters, there may not be any corona effect.  It is because larger distance between conductors reduces the electrostatic stresses at the conductor surface, thus avoiding corona formation.

Power Loss due to Corona

Formation of corona is always accompanied by energy loss which is dissipated in the form of light, heat, sound and chemical action.  When disruptive voltage is exceeded, the power loss due to corona is given by:

It has been seen that intense corona effects are observed at a working voltage of 33 kV or above. Therefore, careful design should be made to avoid corona on the sub-stations or bus-bars rated for 33kV and higher voltages otherwise highly ionized air may cause flash-over in the insulators or between the phases, causing considerable damage to the equipment.

The corona effects can be reduced by the following methods:

By increasing conductor size, the voltage at which corona occurs is raised and hence corona effects are considerably reduced.  This is one of the reasons that ACSR conductors which have a larger cross-sectional area are used in transmission lines.

By increasing the spacing between conductors, the voltage at which corona occurs is raised and hence corona effects can be eliminated.  However, spacing cannot be increased too much otherwise the cost of supporting structure (e.g., bigger cross arms and supports) may increase to a considerable extent. 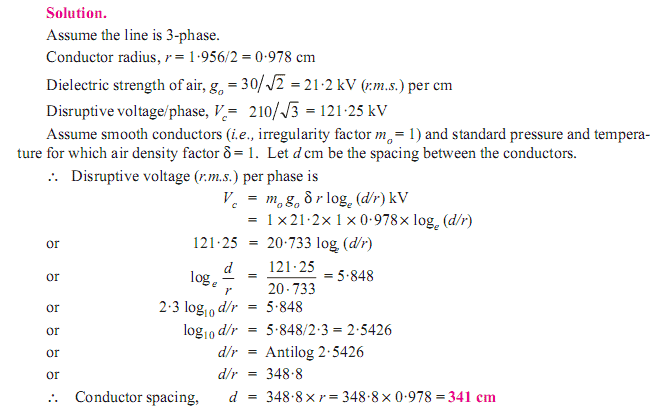 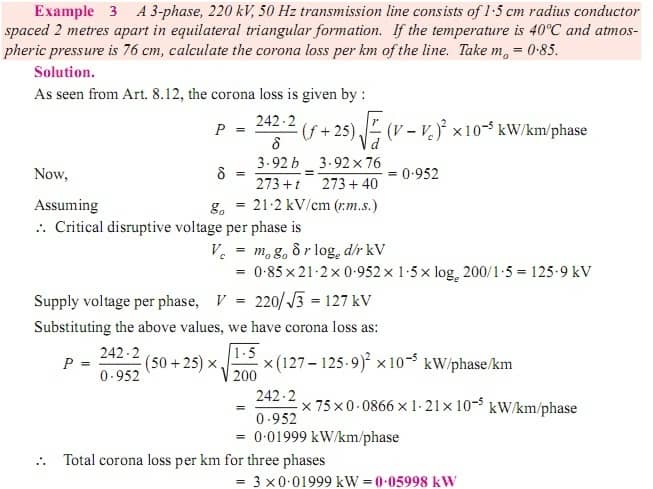 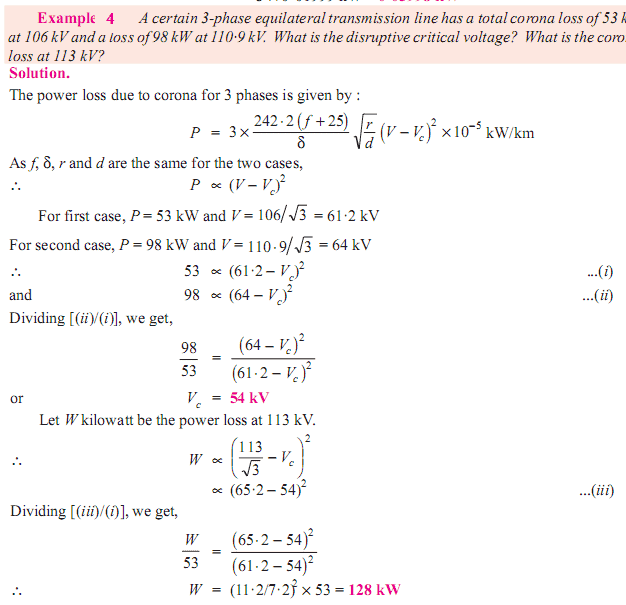 Advantages and Disadvantages of Corona Effect 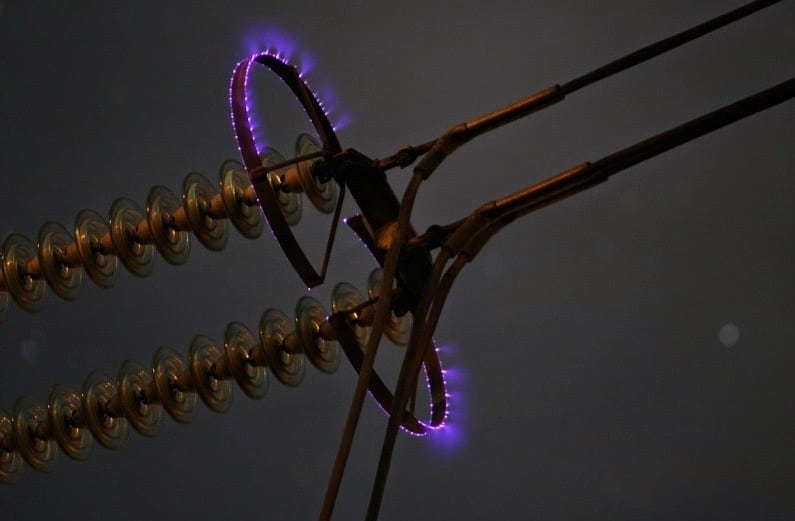 [1]Gradient is a differential operator that when applied to a scalar field F defines the vector in which direction is achieved the greatest rate of increase of that field.

[4]rms: root mean square, a measure of the magnitude of a varying quantity.

Design of Grounding / Earthing System in a Substation Grid