Types of HVDC Circuit Breakers and Their Operation & Applications

The HVDC (High voltage Direct current) offer very efficient way of power transmission across very long distance & is used in various Green energy production nowadays. We use multiple protection devices to protect expensive equipment that are connected to such high voltage transmission lines. One of these equipment is a circuit breaker. We cannot use the same CB designed for AC because of the nature of the DC which renders them useless & may damage the system even more. That’s why we need HVDC circuit breakers in such type of applications.

A circuit breaker is a mechanical switch that automatically operates to protect a circuit from the damage caused by fault current. It automatically breaks the circuit upon sensing huge draw of current flow due to overloading or short circuit. It can also manually break open the circuit for maintenance or fault clearance. It can safely close & open a circuit to protect it from damage.

Once it detects the fault current, it trips & interrupt the current flow. It breaks open the circuit using some sort of stored mechanical energy such as spring or a blast of compressed air to separate the contacts. it can also use the fault current to break open the contacts using thermal expansion or an electromagnetic field using solenoid.

The next step that comes after the separation of contacts is the arc extinction. The arc is generated between the contacts due to the high voltage between them. It can damage the CB contacts or terminals due to excessive heat generated because of high current.

The electrical arc tries to make the circuit, so the current still flows in it. It must be extinguished & different kinds of circuit breakers use various insulating or dielectric arc extinction mediums such as.

Other than the medium being used arch quenching, various arc extinction techniques are used to quickly & safely eliminate an arc.

As discussed above, the AC current fluctuate along zero line offering many natural zero crossing almost 100 times in a second at the 50 Hz. Therefore, the AC circuit breaker utilizes this feature of AC to extinguish the arc when the current is at zero point.

As we know, the alternating current changes its direction continuously which offers to allow multiple chances to extinguish the arc. On the other hand, the DC current stays in steady state & there is no chance of natural zero current. The arc generated in DC circuit breaking does not extinguish since the current never reached zero point.

Related Post: Can We Use AC Circuit Breaker for DC Circuit & Vice Versa?

HVDC (High Voltage Direct Current) circuit breaker is a special type of circuit breaker that is specifically designed to use for protection against fault current in a HVDC circuits.

As we have discussed earlier, the major part that differentiate the DC circuit breaker from other type of breakers is the arc quenching technique. In AC breaker, it is easier to break the circuit at zero crossing because the energy at that point is zero which does not allow generating arc at that voltage level. While in DC, the voltage & current never goes to zero. So there is always very high voltage & current between the contacts during its separation. 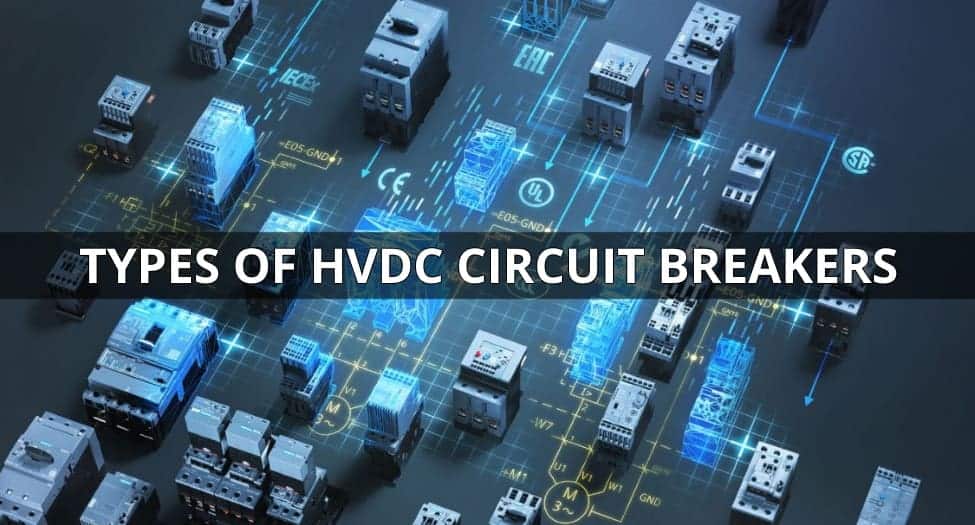 The HVDC circuit breaker operation & design is complex as compared to AC circuit breaker due to the absence of natural zero crossing. The arc generated in HVDC will never extinguish & it will heat up the contacts of the breaker & eventually destroy the contacts rendering the whole CB useless.

Not to mention, the circuit will still be complete & the equipment connected will get damaged due to the fault current. Therefore, the following requirement must be completed to ensure safe circuit breaking in HVDC circuit breaker,

In order to fulfill the above requirements, an LC circuit is introduced with the circuit breaker in parallel which will generate artificial zero current across the line to safely break open the circuit. The strength of the arc is directly proportional to the voltage level & the current. Therefore the fault current must be brought down to zero using an external circuit before breaking it.

In order to generate artificial zero current in the system, an LC circuit is connected in parallel with the circuit breaker. 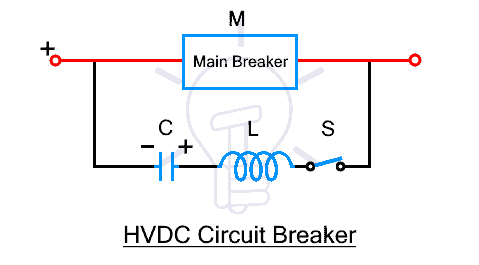 During this time, the capacitor C start discharging & it pushes the current in reverse direction through the breaker M, forcing the arcing current to oscillate (reaching to zero point) which results in artificial commutation or zero crossing. This artificial zero commutation generated by the LC circuit allows the arc to extinguish at zero current point. The extra energy is dissipated with in the LC circuit.

This type of DC circuit breaker can work on a single power line & does not require the second opposite polarity line.

Another method of arc quenching in HVDC circuit breaker is explained using the following design that uses both lines of a DC transmission. 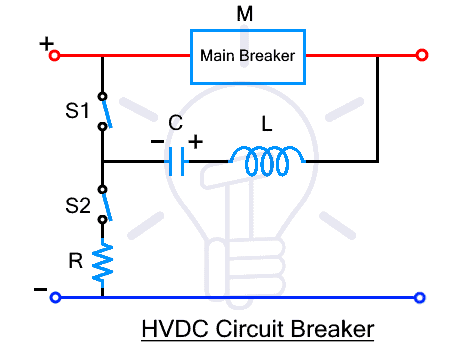 The main breaker M contacts separate at this zero current, resulting in the extinction of the arc. As soon as the M contacts open, the switch S2 is closed & S1 is opened. The S2 allows the extra energy to dissipate in the heavy resistance R. This prevents the arc from re-striking.

The HVDC power has found its many applications apart from power transmission in the field of technology. Here are some of the application of HVDC that require HVDC circuit breakers,

Multiple strings of photovoltaic panels are combined together to increase their voltage & current ratings to power large compounds.

The equipment used for such high voltage (such as the converters & batteries) is very expensive & must be protected from fault conditions. Multiple DC circuit breakers are used for isolating different parts of the system in case of fault or maintenance to avoid any damage or casualties.

The DC power has found one of its best uses in the field of electric traction because of the speed-torque relation of the DC motor. The electric trains, trams & trolleybuses use DC motors. The advantage of DC supply is the use of single conductor that supplies current to the vehicle while the rail is used as the current return path. Thus it also reduces the number of conductors.

The DC power not only powers the motors but it powers the whole trains where various kinds of loads are connected. Thus proper protection system must be installed to protect all equipment. Therefore, multiple DC circuit breakers are used to protect each system.

The HVDC is mainly used for power transmission over very long distances. HVDC terminals used for the conversion of the DC to AC or vice versa are quite expensive. They must be protected at all cost. Power transmission is mostly affected by fault currents that can easily damage any equipment connected with it.

Therefore, the HVDC circuit breakers are installed in the line to protect from fault current. Furthermore, they are also used for isolating the transmission line for maintenance work.

Multi Terminal Direct Current or MTDC is a complex type of HVDC transmission system which is used for its power transmission, flexibility & control over the power distribution between multiple grids.

The MTDC as its name suggest connects multiple terminals thus having multiple circuit branches. In case of faults or scheduled maintenance in a specific branch, it needs to be de energized using a circuit breaker. Therefore, multiple HVDC circuit breakers are used for separate branches.

How to Wire Solar Panels in Series & Batteries in Parallel? 12/24/48V System

How to Wire Solar Panels & Batteries in Series-Parallel Connection?